Hey guys, Drew back here! The past few days haven't exactly been busy for me, however rather than blogging I've been preparing for a card show I'm going to tomorrow! Finally, all the wantlists are ready to go and I'm looking forward to going with my buddy Schuyler early tomorrow morning! So, in the meantime, check out the two autographs I've recently picked up off of eBay within the past month or so! 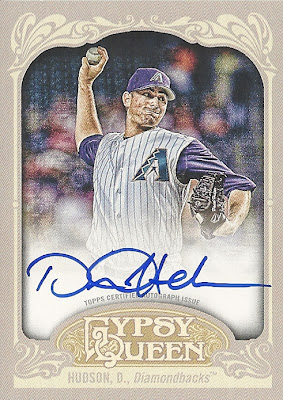 First, out of 2012 Topps Gypsy Queen, here's a pretty sweet looking Daniel Hudson on card auto! Hudson has been one of the better young pitchers in the game over the past few years, although this year hasn't really gone as well so far. I've had him on my fantasy team a few times in the past year, and he's been able to provide me with some solid starts. This year's Gypsy Queen autos, along with most Topps 2012 autos in general, look fantastic, and I'm glad I was finally able to get my hands on one. For the price I paid, it was well worth buying, without question. 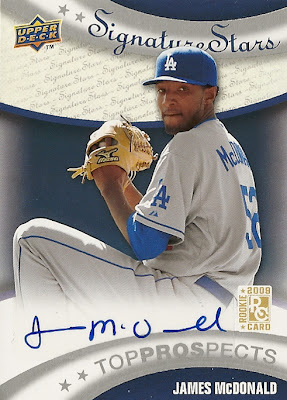 While the Hudson autograph was pretty awesome already, I went out and outdid it by picking up this 2009 Upper Deck Signature Stars rookie autograph of Pirates emerging star James McDonald! James is enjoying a breakout season that has had people arguing whether it was worthy of an All Star selection or not. I picked up McDonald about a month and a half ago and he has been nothing less than brilliant, and on the season he sports a 9-3 record with a 2.37 ERA for the first place Pittsburgh Pirates! The Pirates have become my second favorite team in all of baseball since I've started following them for a few months, and I'm glad to say that I now own an autograph of arguably their ace! While this card doesn't have the sex appeal the Hudson has, it certainly isn't the ugliest design I've seen. It's a sticker autograph, but sometimes you have to buy what's fairly cheap and affordable.

Anyways, I hope to see a few more people join in on the contest before the July 21st deadline! Click here if you haven't seen it yet but want to win some great prizes for next to nothing! But for now, so long and See Ya later!
Posted by Drew at 5:34 PM