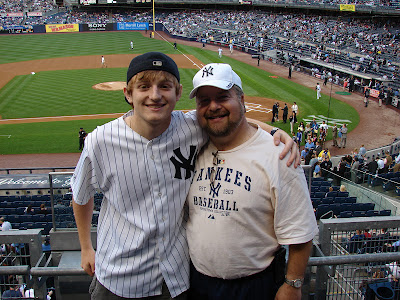 Hey guys, Drew back here, and this time I'm sticking around, I swear! My family just returned from an incredible cruise in the Carribean Sea, where we enjoyed great food and excursions on St. Thomas, Barbados, St. Kitts, St. Lucia, and St. Maarten. Everything was phenomenal and I miss it already, however, I've still got 2 months of freedom to go, so I'm going to make the best of them!

So, in order to do so, I need to take you all on a time machine, back into the beginning of last month, because, well, I never got around to posting about it. It was the second to last day of school, before finals began, and Dad, my Uncle Scott, and my cousin Jayen were gearing up to go to the big pitcher's dual in Yankee Stadium! We were given tickets by my Grandpa Walt, who normally joins us for a game once a year, however due to him feeling pretty sick he gave my dad a chance to go this time around. I remember I was really looking forward to seeing CC Sabathia face off against David Price of the Tampa Bay Rays, and spent the whole school week thinking about it. But the day had finally come, and after a train ride, we arrived to the home of the Bronx Bombers!

Unfortunately, as soon as we left the train and started walking to the stadium, it started to absolutely pour. We all got a bit nervous, but we had a little hope that it would clear up because the clouds were moving by pretty quickly. 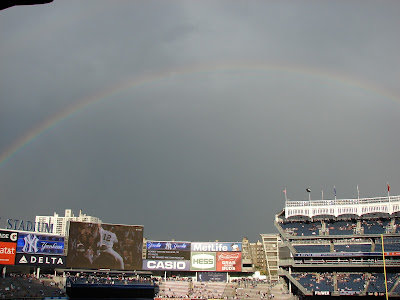 Fortunately, we were most definitely right. It wasn't the most beautiful day for a ballgame by any means, but that full double rainbow we saw that stretched from left field to right field was pretty darn cool to see! The rainbow simply told us not to worry because baseball would soon be played! The players started to trickle out of the clubhouse a little at a time and before you knew it most of the team was warming up for the game and getting ready to go! My camera was good enough to catch former Yankee manager Joe Torre in the dugout talking to Jeter, which was cool to see. Torre was there for some charitable reason, along with a few other celebrities, such as  Paula Abdul. 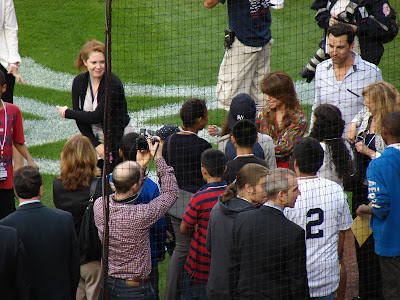 Torre got a much larger ovation than the former American Idol judge, but that was only fitting considering the man led the Yanks to 4 championships in 5 years. 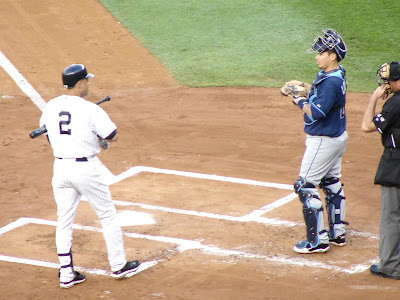 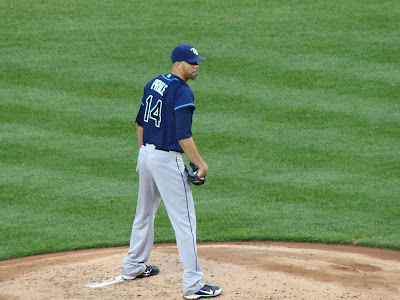 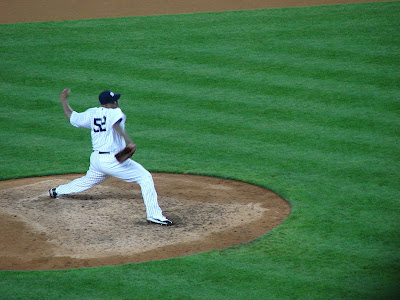 So, the game was finally underway after about a half hour rain delay, and while it started off looking to be a close game, the Rays pulled away by the 4th inning, taking a 5-1 lead. Sabathia never had his game that night, without question, and while Price had a high pitch count, he fared much better than the Yankee ace. It came down to the bullpen holding the game for us to have any shot at a comeback victory, but Corey Wade and Clay Rapada couldn't get the job done as well, and by the 8th inning the score was 7-2 Rays.
One thing that was pretty cool was Girardi's transition from right handed sidearmer Cody Eppley to left handed sidearmer Clay Rapada. Sidearmers are definitely fun to watch because their windup is so much more unique than the typical pitchers style. As I said though, nothing positive came of it, as Rapada gave up an RBI double to increase the Rays lead. 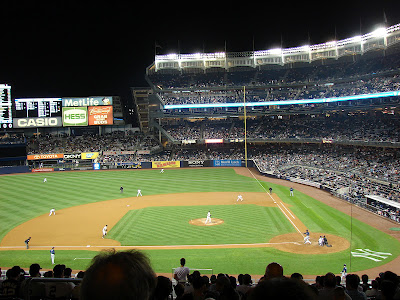 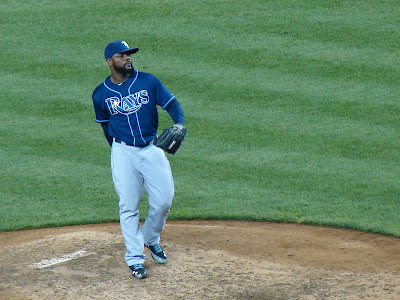 It definitely turned out to be a nice night in Yankee Stadium, even though things weren't going so well for my team. However, it wasn't over yet, as Russell Martin hit a pinch hit home run to make it 7-3. Unfortunately, it wasn't enough, as Rays All Star closer Fernando Rodney shut it down in the 9th to give the Rays the W.
The results weren't pretty, but like every time I get a chance to see a game, I had a great time with my family and they did as well. I want to thank my Grandpa for treating us once again, even though he probably isn't reading this, it meant a lot that he was thinking of us even when he's had a tough past few months. We definitely appreciated it.
Before I close this post up for good, I want to quickly show some scans of the results of 2 2012 Bowman rack packs I opened at the game! Check em' out! 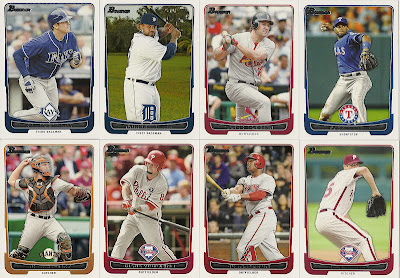 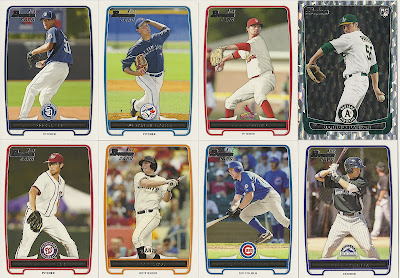 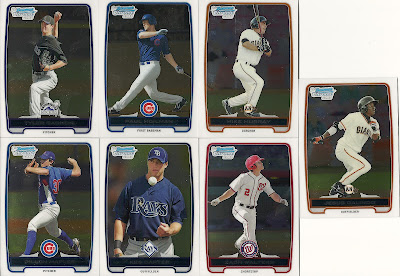 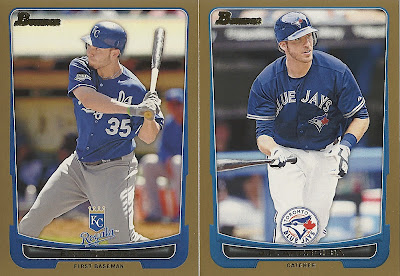 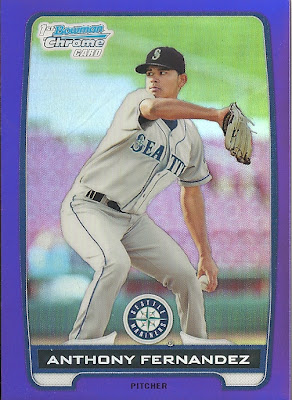 Just about all of these are for trade, including the purple refractor of Mariners prospect Anthony Fernandez numbered 48/199! Let me know if you like anything by leaving me a comment. Thanks!
Last but not least, Happy 4th of July everyone! Hope you've all got some fun plans for the night, and well, God Bless America. God Bless America's Pastime. Ok, I'm out. See Ya!
Posted by Drew at 3:42 PM