Hey guys, Drew back here! With another day comes another card show review post, and boy do I have some great stuff to show off here! Here are all the other cards Dad and I purchased throughout the awesome day at our local civic center: 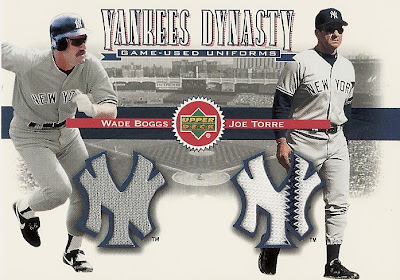 First off is this sweet 2001 Upper Deck Yankees Dynasty dual relic of Wade Boggs and Joe Torre! This card certainly is a neat concept, in having a Torre relic on the card. It's not often that you'll find relics of managers in baseball card products nowadays, so this was definitely a unique pickup. 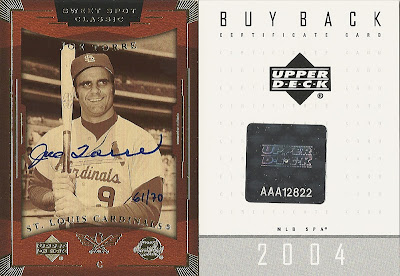 Speaking of Joe Torre, Dad found this sweet buyback autograph of his and was able to get it for me for a pretty good price! Torre was one of my more wanted autographs in my collection, so I really appreciate him helping me knock that one off the list. I grew up with Torre managing so there will always be that special connection with me and him that I don't necessarily have as much with Joe Girardi. I'll always be stubborn that Mattingly didn't get the job, I guess. Oh, and also, this buyback is numbered 61 of 70, making it a pretty rare card all around! 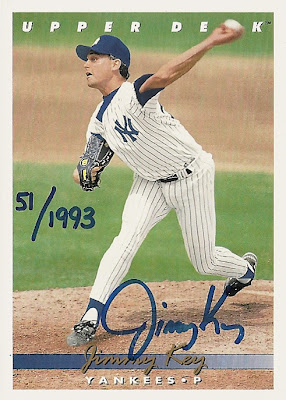 Another autograph that has always haunted me has been Jimmy Key's, and I was also able to knock this one off the list this time around. It's not that he has a rare autograph, I mean he even signs TTM pretty consistently, but I just never got around to sending the 4 time All Star and 2 time World Series champion a request. However, this old Upper Deck hand numbered auto to 1993 finally fulfills my lazyness, and I like the card a lot. I'm not sure how rare it is, considering they printed way too many cards back then, but it's definitely a cool addition without a doubt. 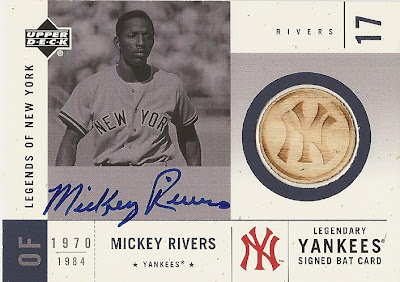 Next, the first of two cards from this set, is this Mickey Rivers 2001 Upper Deck Legends of New York bat autograph! Yesterday I watched a lot of "The Bronx is Burning", the old ESPN special about the late 70's Yankees scene, and Rivers stands out more than most, always opening his mouth and messing around. A modern player that kind of resembles Rivers to me is the Brewers' Nyjer Morgan, because they both have larger than life personas. I'm definitely glad I got to add this one as well, even though I did already have an autograph of his. 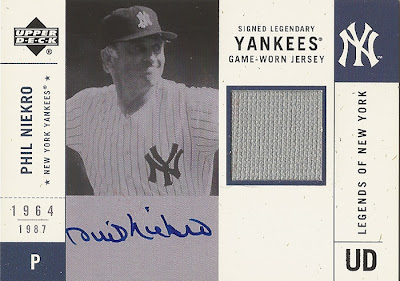 The other card from that set we picked up was this Phil Niekro jersey autograph, which is apparently short printed out of 195! Niekro is another autograph who has eluded me over the years, but I was finally able to knock him off the list as well. He only played 2 seasons in New York, but the legendary knuckleballer certainly donned the pinstripes very well in those years. I've always loved watching knuckleball pitchers, especially RA Dickey recently, so it's definitely a cool card to have. 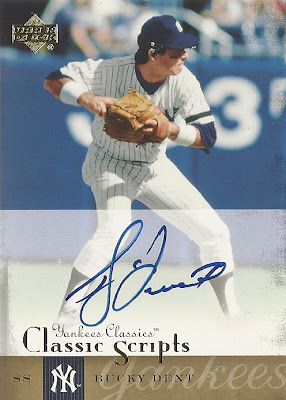 It seems that the theme of our pickups here at this show are mostly of guys I have barely anything of, so it's fitting that Bucky Dent made an appearance as well. I literally had absolutely nothing worthy of mention of the man who hit one of the most clutch home runs in Yankees history, which is really pathetic. So, finally I got to change that, thanks to my awesome dad. 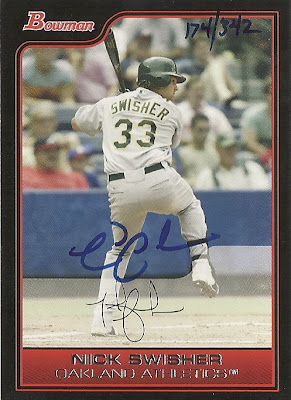 Unfortunately, the run of newbies in my collection came to a close, as I got my 11th autograph of Nick Swisher on the day as well. I have this same buyback already, but it's encapsulated unlike this copy, which was probably once in a case. I'm starting to try to enjoy the last few months with him as a Yankee potentially, if he decides to sign elsewhere next year. He's just what the team needs though, so it would be disappointing to let him go. 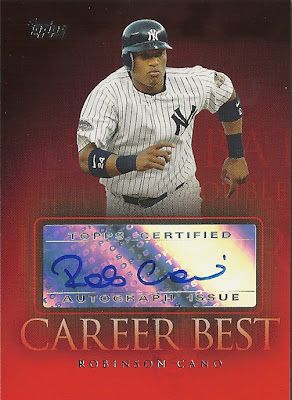 One autograph that Dad got me that also took me by surprise was definitely this Career Best autograph from  2009 Topps of Robinson Cano! Cano's card prices have skyrocketed, especially in New York, so this really was awesome. He is easily my favorite player in baseball, and I truly believe the reason he did horrible in the Home Run Derby was because he was saving his bombs for when it will count in the next few months! 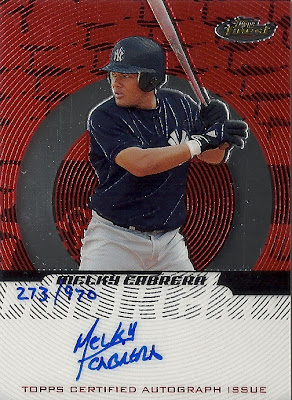 Unlike Cano, this Melky Cabrera guy absolutely raked in the All Star Game this year, taking home the MVP. I've always been a fan of his, especially back in his Yankee days, and that love came back this year as he has been an MVP candidate for my fantasy baseball team (what a draft pick!). I got this 2005 Topps Finest rookie auto of his for a solid price, which was unexpected because of how well he's doing. Gotta love it. 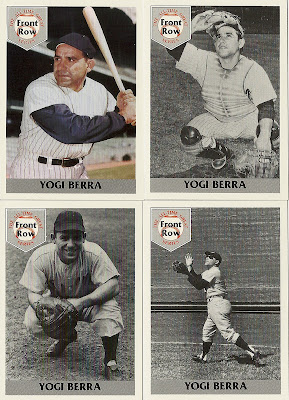 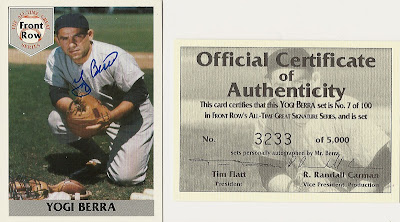 Finally, Dad decided to pick up this mini 5 card set of Yogi Berra, which was extremely cool because the first card in the set was signed! I've never seen this Front Row set before, but I'm really glad Dad introduced me to it by getting me it. It's only my second Yogi autograph, so I'm thrilled with this one over all of the other stuff.

But, there is still a lot more to come, besides just cards. Be sure to check out this site within the next few days if you want to be amazed! Ok, maybe not amazed, but if you want to see something cool, this is a good place to be! Thank you again Dad for all of the incredible stuff! I still don't get why I deserve all this!