Lance Berkman to the Yankees! 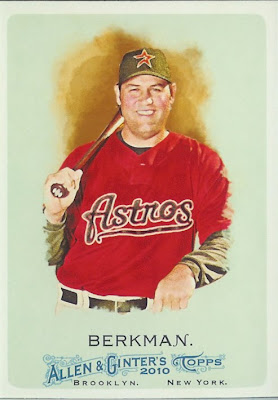 Hey guys, Drew back here, with some big Yankees news. Lance Berkman is expected to be traded to the Yankees before the trade deadline expires today. But for who? We don't know yet. All I know is that Lance can be a pivotal part of the Yankees run through the playoffs this year. His switch hitting and veteran know-how is going to help build a better bench for the Yankees. He will start some games batting 2nd DHing, which will be good, an RBI powerhouse behind Jeter and before Teixeira. Now it's a pick your poison thing for the top of the lineup.

But who will leave the Bronx in this deal? Will it be young catching prospect Jesus Montero? Honestly, I doubt it, but do we really need him? I know we want him, but Cervelli certainly looks good so far this year, and when Posada eventually does leave, they will consider starting Cervelli and picking up a Jose Molina type player as a backup, or will the young Montero step up to the Majors by that point? We don't really know what will happen, but I definitely wouldn't be happy to see him go for Lance Berkman, a player that will probably only be a Yankee for the remainder of the season. He's 34 and has suffered some injuries in the past few years, and isn't as productive as the superhero he was a few years ago.

Who else could leave? I bet one of these three guys will leave: Chad Huffman, Colin Curtis, and Kevin Russo. Three young guys that have been up and down the minors and majors that can certainly play. Curtis may be the first to go as he's shown that he could be a starting outfielder for some teams. I say that he's first because the Yankees just picked up Austin Kearns for the famous PTBNL, and Marcus Thames is healthy and could serve as a backup outfielder even though he's pretty slow in the field now.

Or will it be a Chan Ho Park, Jonathan Albaledejo, Chad Gaudin, or even a Joba Chamberlain that will leave? I doubt Jonathan will leave, since he's pitched very well in Triple AAA and the majors recently, or Gaudin, who serves an important role in the bullpen. Park and Joba have provided no help in the bullpen, and have been very inconsistent especially of late. I don't think Cashman will deal the bullpen guys, especially since they are playing a critical role for the Yankees season this year, and they haven't done an excellent job.

I hope that someone of a high caliber won't leave just for Lance Berkman, because that would be stupid. It should be interesting to see who the Yankees will deal for the Puma. Who do you think will leave? Let me know in the comments!

*UPDATE* Lance Berkman was officially traded to the Yankees for cash and Pitcher Mark Melancon and Infielder Jimmy Paredes. Not bad!