Hey guys, Drew back here, with the second of four box break reviews, my box of 2010 Allen & Ginter! Here's the product information:

Alright, now that we got that out of the way, let's see what I pulled! 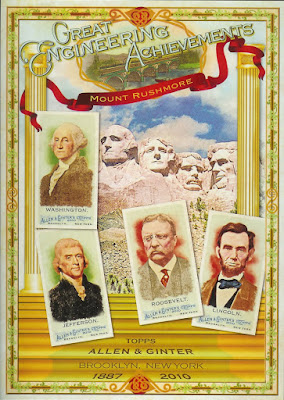 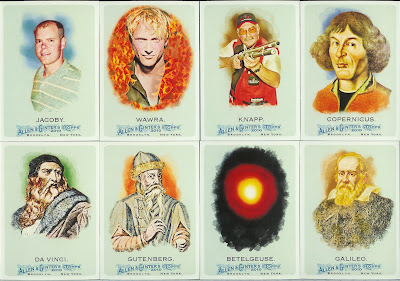 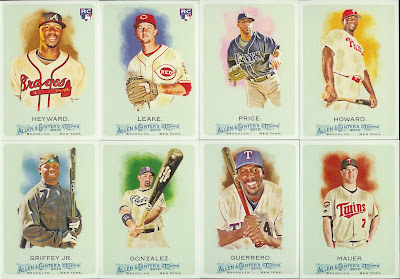 This was my first experience with 2010 Allen & Ginter, and I must say, I really like the new design. The greenish tint behind the photos make it different and fresh looking. There's a ton of interesting inclusions into the base set, including Leonardo da Vinci, Jordin Sparks, Tom Knapp, the Warwa fire eater guy, and Regis. Of course, Area 51 and Betelgeuse have cards, as Allen & Ginter keeps up it's odd and distinct popularity.
SP's: 12/50 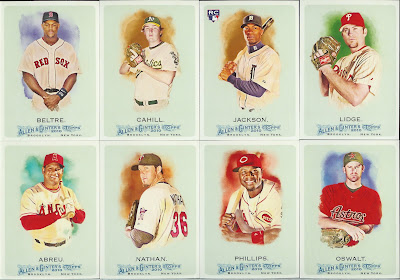 I pulled 12 shortprints, which I'm pretty sure is double what others have been getting. I got Adrian Beltre, Trevor Cahill, Austin Jackson, Brad Lidge, Bobby Abreu, Joe Nathan, Brandon Phillips, Roy Oswalt, Stephen Drew, Alcides Escobar, Gaby Sanchez, and Casey McGehee (last 4 not pictured). It's a lot less work now thanks to this, got pretty lucky on that part.
Base Set + SP's: 135/350 (38%) 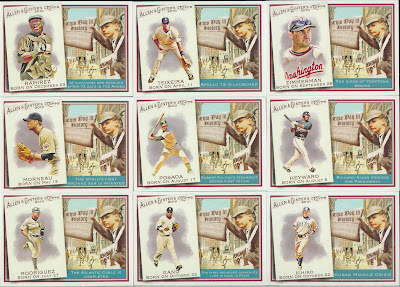 A very unique idea by Topps to use this idea for an insert set. If you don't know, each card represents an event that occurred on a player's birthday with a picture of the player. The random newspaper guy got boring, but the concept is awesome. I'm definitely gonna try to build this set if I can. 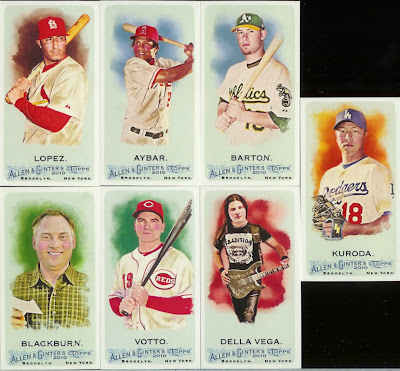 I've always liked the minis in Allen & Ginter, but my selection of regular backed minis was not special. We did get 2 SP minis in Daric Barton and Hiroki Kuroda, and a paper airplance world champion. This was a great box based on SP's. 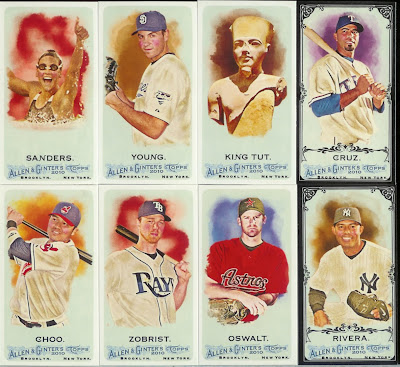 Wow, 6 A&G Backs? I don't get the point of these, they should just have the regular and black border. Another SP popped up in Roy Oswalt, and we got a King Tut! The black borders look as good as ever, especially the Mariano Rivera, which is taking a seat in the Yankee Collection box. 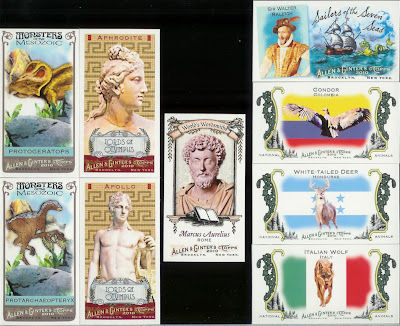 Lots of nice historical inserts in this set this year, with some dinosaurs I've never heard of and don't know how to say, some Greek Gods, a writer, a sailer, and some National Animals. This is part of the fun of Allen & Ginter, you don't know whats gonna show up in your box.

A well designed insert set, the Teixeira and Wise are nice, but Night Owl has a candidate for Worst Card of the Year with the Ethier. That face looks nothing like his! 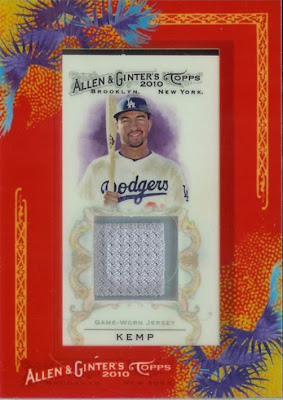 Speaking of Night Owl, here's a hit he may want. I kinda wanna keep the card unless there's something nice to get in return. That goes for everyone that may want it. It's actually not a bad card, a jersey of a pretty good player. 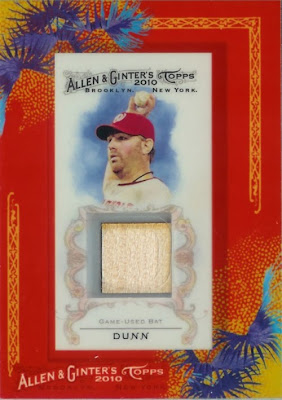 The Yankees are closing in on Lance Berkman, which leaves this poor guy in the dust. He's a great player hoping to get out of Strasburg land, and go to a contender, something he's never experienced in his life. I like Adam Dunn, so for now, I don't know if I'll trade this, again, unless you make a good offer. 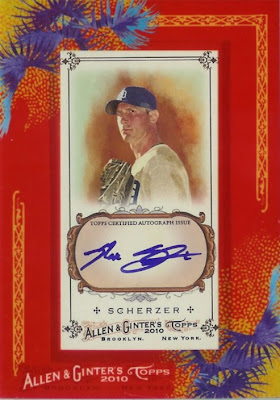 Not bad, I guess. At least it's a baseball auto, and it beats Rich Hill from last year that I pulled. Scherzer isn't bad though. It's for trade but only for another 2010 Allen & Ginter auto (I like the Nolasco and Chris Young autos).

I guess it was a pretty good box, hit some nice cards and had a lot of fun opening it! Part 2 of the review is coming soon! See Ya!
Posted by Drew at 8:04 PM