Hey guys, Drew back here. For my birthday, I decided to pick out 3 boxes to break. I ended up with 4, but I'll get to that eventually. The cheapest one was 2008 UD Masterpieces, so I'll share that with you now. But first, the product info...

- The base from Masterpieces are truly Masterpieces, the canvas feel makes the cards one of the best sets, in my opinion, ever. EVER. I think 2007 got it beat a little on the player selection but 2008 is awesome too. 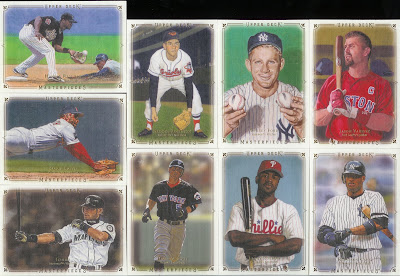 - Great cards of awesome players. I don't know if I'm gonna attempt this set though after my troubles with Goudey. 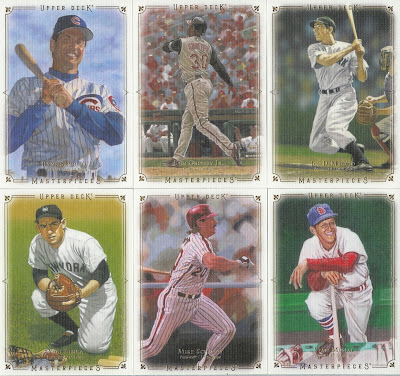 - Very boring set at this point, even as a Yankee fan. But I do like the Yogi and the WWII one. - These are so nice, even nicer than the base cards I must say. We pulled a Short Print Black Border of Nolan Ryan also, and it looks amazing. The Harden and Pence are definitely for trade, make me a good offer if you want the others. 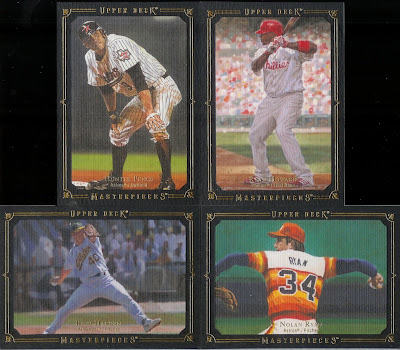 - More true greatness, the blue kinda looks really similar to the black unless you look close. The red, well, what do you think, it sticks out a ton, and looks pretty nice! 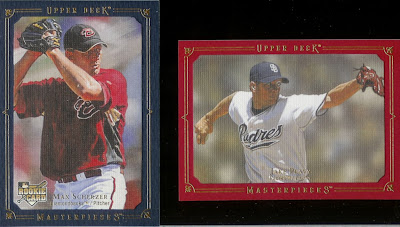 Game Used: #CC-EC Eric Chavez
- So, I have a funny story to tell ya. So I was opening this box of 2008 Masterpieces, and it was all nice and stuff, until I opened a pack up to find this piece of material, that Eric Chavez wore in an MLB game. Last time I checked this could be anything, maybe, ya know, couch worn pajamas while wearing a full body cast watching baseball on the sidelines? Ok, my rant is done. Point is, this hit is DEFINITELY FOR TRADE! Moving on. 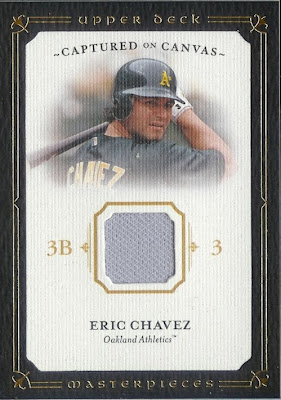 - We conclude this box break with an autograph signed by former Yankee Xavier Nady. Not an awesome hit but I'll certainly take it for the Yankees collection! He has a really cool auto, and the card is very nice. 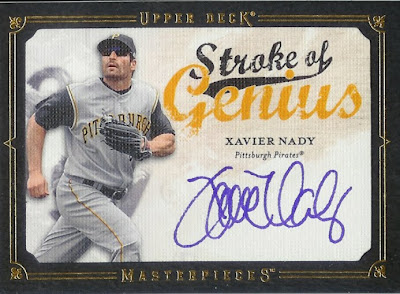 The grades are being worked on now, and they will be posted tomorrow! See Ya!
Posted by Drew at 8:01 PM