Hey guys, sorry for the delay, but I finally have my review for my box. I completely forgot to do it, but anyway, let's get to the grading!

Design: Well, I did this also for Series 1, but what the heck, I'll do it again. The base set design and photography in Series 2 goes very well with Series 1, a great job done by Topps. A lot of really cool photos are used, and there's something interesting for almost every card. The only problem that I see more of in this version then the other version of 2010 Topps is the name of the player on the front of the card. The foil looks very screwed up, and here's a great example of this occurring: 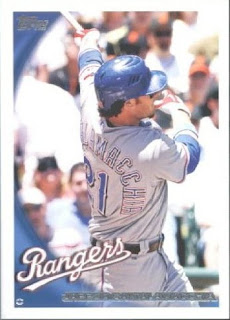 Although the picture of Jarrod is quite hilarious, look at the size of that name. Case closed. As far as the new inserts go, the 3-D cards look really cool, but the History of the World Series is really boring. It's a cool concept very poorly executed by Topps. And the idea to fix the boring jersey card Peak Performance design was good to do, that design is blllllllllllannnnnnndd!!! Design Grade: B

Price: Strasburg Mania hasn't really effected the cost of this product, since he's not in it. The price was higher due to the Million Card Giveaway Strasburg card, and the chance of a future Red Hot Rookie Strasburg, but now the price has faded for jumbo and hobby. My box was a jumbo, and it cost $105 at my card shop. Not too bad, but a little too much for a 2 hit plus manu-patch per box. I don't know if jumbos are really worth it, I actually did make the whole base set somehow, I really screwed that up. I have a lot of doubles and not many inserts. Price Grade: C+

Hits: In this product, the hits are typically not the reason you buy it. I kind of consider them as bonuses. But when you spend $105 on a box, you want to have something that you like for your collection thats not a $1 base card you could easily trade for or scoop off of eBay. In this case, I made out really well. I pulled an autograph of young Mets outfielder Daniel Murphy, which I will probably be able to trade at some point, due to the amount of Mets collectors around here. I pulled a game used "memorabilia" card of Nick Swisher, the guy I collect, an outfielder for my favorite team. I don't pull Yankees very often so that helped out big. I pulled a hat logo patch of Zach Greinke, one of last year's premier pitchers, the 2009 AL Cy Young award winner. The card looks great and it was a good way to end the box. I also got a short print of Nolan Ryan, a Red Hot Rookie Redemption, and 10 Million Card Giveaway code cards. Not bad value for one box. Hits Grade: A-

Overall: Topps Series 2 Jumbo Edition is a really fun break. With 50 cards per pack, including 10 inserts and a possible hit, it's pretty easy to find nice cards. The design is nice, the price isn't extremely high, and the hits are often pretty cool too. Pulling a Swisher not only was awesome, but it also means I don't have to chase that card down on eBay ever again yay!!! If you wanna have a fun break and get most if not all of the set, go buy Topps Series 2. If you normally don't buy boxes this expensive, I wouldn't do it. I'll give this box a B+. Overall Grade: B+

Ok, you heard it from the genius that is me :), so now, leave any comments about your opinion of the product. See Ya! 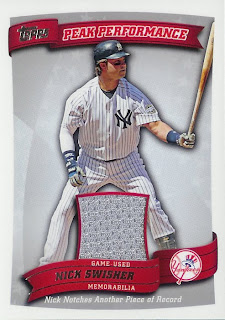