Hey everyone, Drew back here! It has been a nice feeling to get back into blogging again, much like I was earlier this year. It took a little while to get me back on my feet, but with a critical fall ahead academically, it'll be good to have the blog to turn to when I need to relax. I never thought this site would still be going by this time in my life, but why stop now? As far as I know, I won't stop collecting anytime soon, and it's an awful lot of fun to talk about it all to people who are actually interested in it.

Anyway, all of that aside, I did get one TTM in a few weeks ago that I hadn't showed off yet. It's not a major one, but two very cool autographs nonetheless. 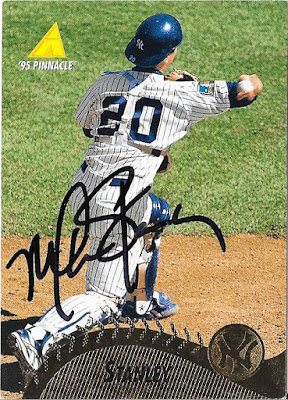 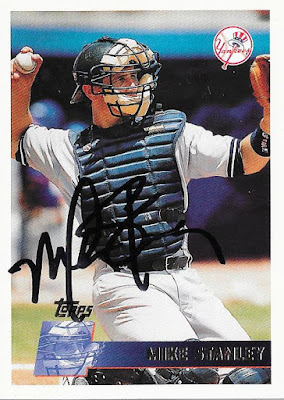 Former Yankees catcher Mike Stanley signed two cards for me in under 2 months! As I've said before, after upgrading my iPhone early this summer, I lost the note that tracked when all of my requests were sent out, so I no longer have exact dates for any of my successes (nor do I know who I've even sent to). Stanley was a frequent mention early on in Jorge Posada's autobiography; Jorge often said how helpful he was as he was just a rookie. He was a solid contributor for the Yankees and several other teams, a consistent threat for a batting average hovering around .300 and over 20 home runs. He also caught Nolan Ryan's 7th and final no-hitter.

Both of these cards look really good with his black and bold signature across them. I'm glad I took the time to add one of the Yankees more underrated catchers in their history.