Hey everyone, Drew back here! Amidst a busy week at work, it looks like I've managed to complete my card show recap within less than a week's time, which quite possibly could be a record. I have so much to post, and with school coming up I wanted to be sure I could get most of that in before I'll be even busier.

The final piece of this card show recap was a special surprise from my Dad! Following the show, Dad and I were on our way to a family birthday party when he told me to pull my cousin's gift out from under the seat. Instead, it was a box of 2015 Topps Stadium Club, and he couldn't have surprised me any better! After the family party, we went home and ripped open the first hobby box in over three years (yikes)! 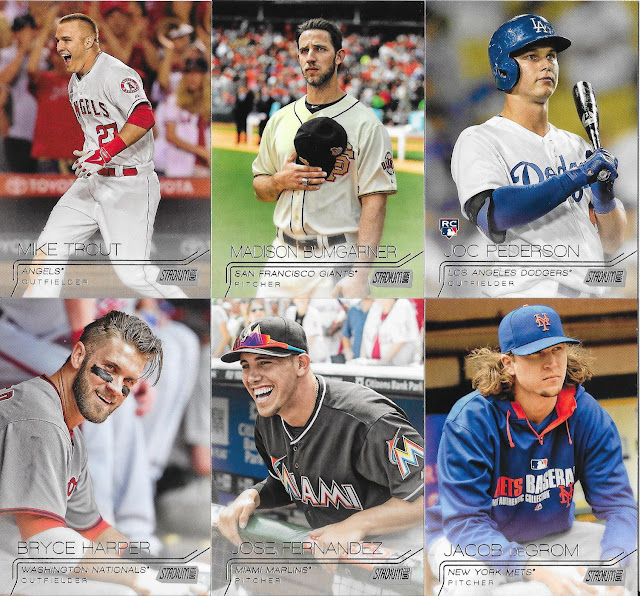 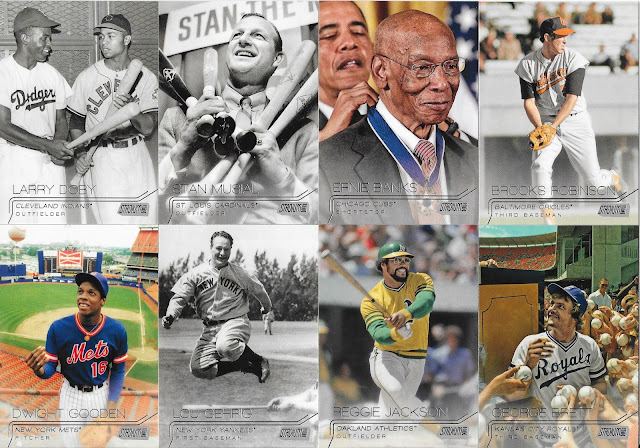 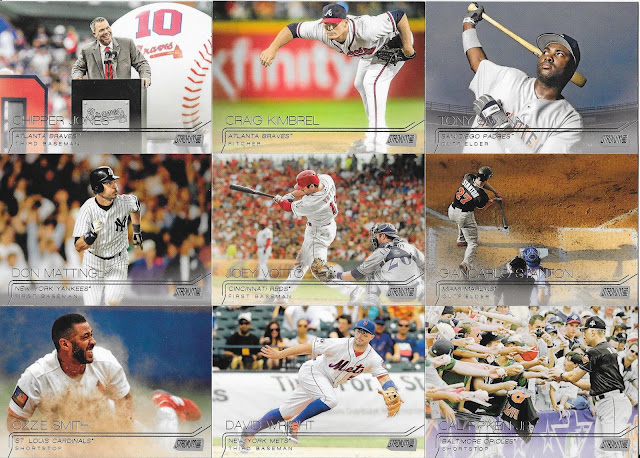 I know, you've seen them all at least a hundred times on every blog all summer long. But who could possibly complain? In my opinion, this product has been the best of the year by a considerable amount; even better than Topps' refreshing flagship set. I have been wanting to check the product out firsthand for a few months but didn't get around to it until last weekend. If I had to choose my three favorites of what I pulled, I would go with the Ernie Banks, Lou Gehrig, and Dwight Gooden cards. The photography is so bright and bold, and I couldn't possibly enjoy it any more. 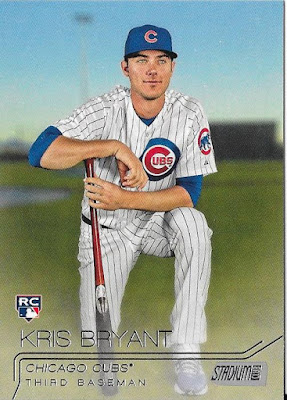 I also pulled the beautiful official rookie card of Kris Bryant, which will be one I plan on holding on to while he ascends into superstardom. Bryant hasn't quite broken out yet, but it's coming. 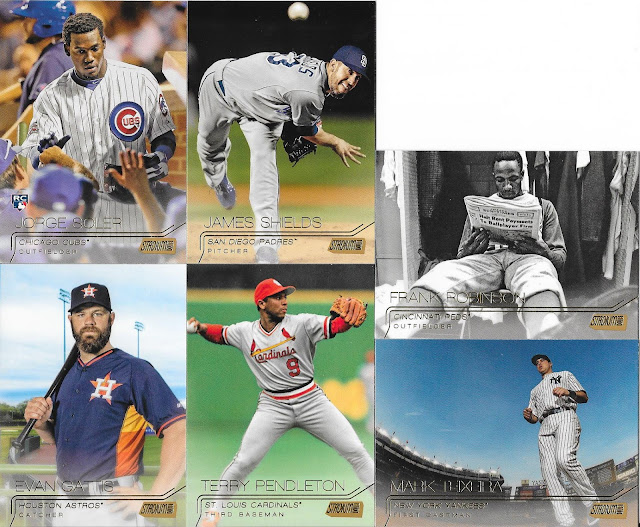 I've always found parallels to be quite gimmicky and pointless, and despite Stadium Club having such a brilliant base set, it did not escape that issue. However, everything I don't like in most products are acceptable in Stadium Club; because at the end of the day, the photography is all that truly matters. 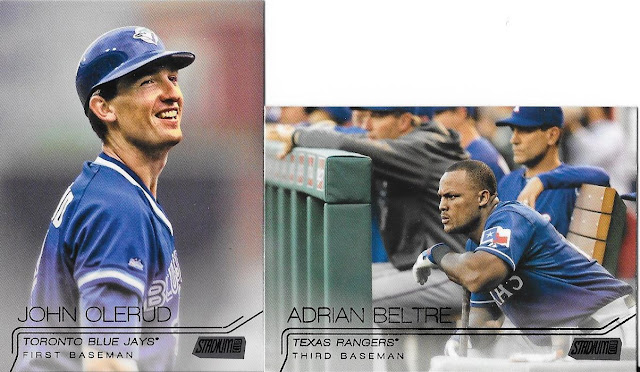 *Stay calm, Drew. Try not to lose it over meaningless parallels.* Well, maybe I'll send the Olerud out TTM eventually. 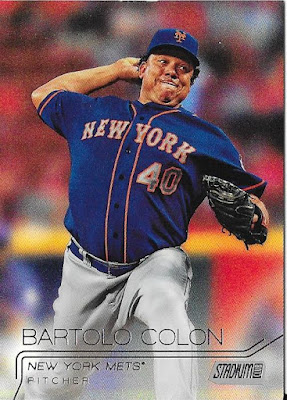 I am a sucker for foil parallels, though. I feel like if they scrapped one or two of the not numbered parallels and maybe limited each card to 100 of these, it would be more fun to collect the specific parallels. The less, the better in my eyes. Unfortunately, this Colon card numbered to 25 has quite the ding on top. 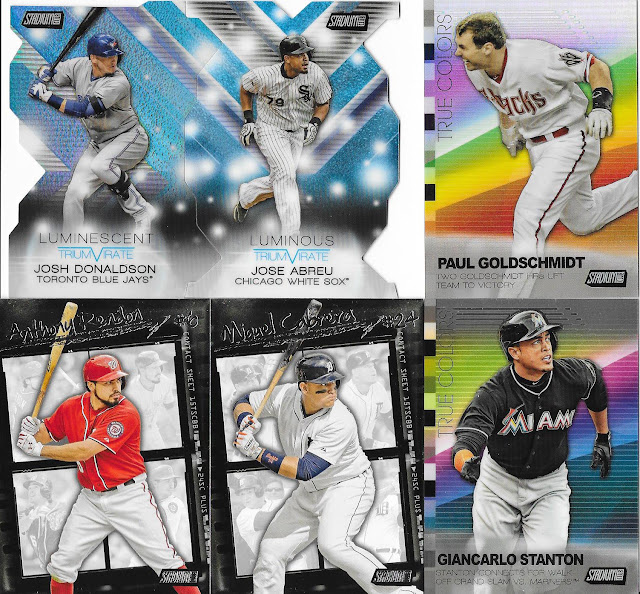 It seems hard to execute an insert set in a set where people enjoy the base cards as much as collectors do with Stadium Club. While the designs for the Triumvirate, True Colors, and Contact Sheet are well done, they really don't serve much of a purpose. I would rather have more of the regular set than these, but I can't complain. I did happen to pull the "Luminescent" version of the Josh Donaldson Triumvirate (notice the refractor shine in comparison to the Jose Abreu), and the refractor "True Colors" of Paul Goldschmidt. 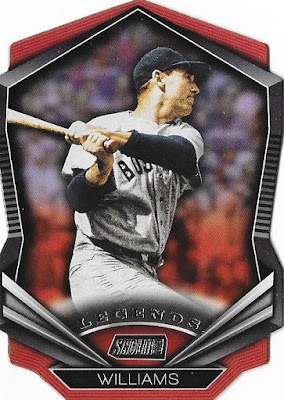 My favorite insert set, as overdone as this theme may be, was certainly the Legends subset. I pulled this Ted Williams card, and it is flawless. I love a well executed Die-Cut when I see one, and this is the epitome of such. 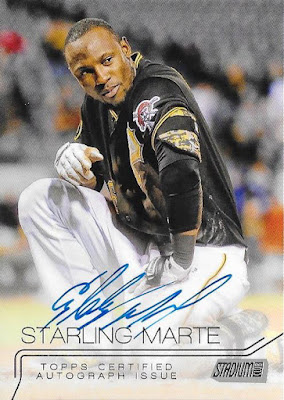 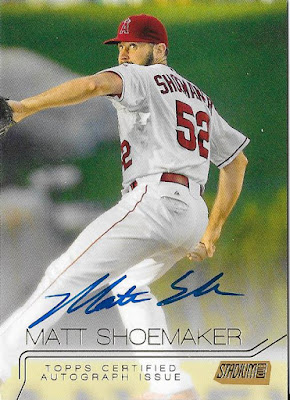 I think we did pretty well with our two autographs, although it certainly could've been better. Marte is an electric young player with a lot of potential, but I do already have an Allen & Ginter framed auto of his. I have also gotten Matt Shoemaker TTM, so I would consider trading either for anything PC related with similar value. Shoemaker has struggled immensely after a breakout finish in 2014, but still has the tools to become a solid starting pitcher. Over anything, it can be said that these cards just look flat out amazing bearing signatures.

Dad and I didn't pull a Kris Bryant autograph, but we had a great time opening a tremendous product! Thank you so much Dad for capping off what was a wonderful day with a bang, and I can't wait until the next show!