Check Out My Phenom Fireballers!

Hey guys, Drew back here! The final week of my summer is just about to hit the midway point, and I'm doing everything I can to not only enjoy it but get a lot accomplished before heading back to school. I slacked early on in the summer due to a big change in my life personally, but now as this fall semester is getting underway I'm feeling more motivated to take care of some things.

I've been selling cards on Check Out My Collectibles for a few years now, and although I don't quite sell as much as I used to, I still do pretty well. With the store credit I accumulate, I've been purchasing cards I'd prefer to own in my collection; whether they be direct PC or not. I added two cards this summer with my store credit, both being of particularly special young hurlers in the AL East. 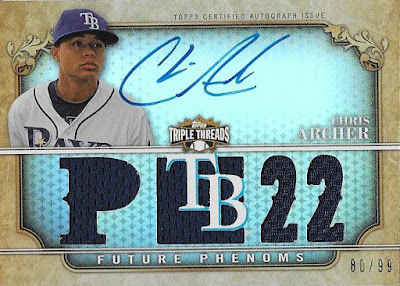 Chris Archer has been building off a successful first few years in the big leagues consistently, but has truly broken out in 2015. Though at times inconsistent, there are few pitchers who can dominate a start better than the Rays 26 year old ace. This year, he is 11-9 with a 2.77 ERA and is 4th in all of baseball with 205 strikeouts! His record doesn't speak for the success he's had, and the advanced stats indicate that his ERA could even be high for what he has compiled throughout the year. With a little bit of help down the stretch he could lead Tampa Bay to the final Wild Card spot.

I bought this "Future Phenoms" autographed relic out of 2013 Topps Triple Threads for a little over $10, and I have a feeling I won't be regretting it. 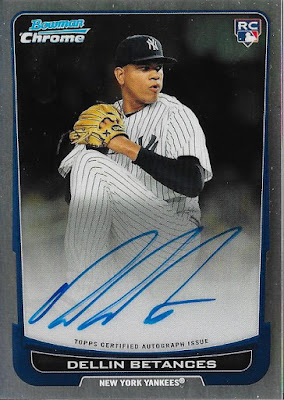 Yankee fans waited a long time for this giant of a kid. After waiting for years, hearing about the "Killer B's" (Betances & Banuelos), and just about giving up all hope on the former top prospect, Dellin Betances is finally here to stay. And if you haven't seen him dominate the late innings for the Bronx Bombers yet, you're missing out. Relievers are supposed to be filled with adrenaline and pump the stadium up, and Betances does just that; throwing fastballs that have the potential of hitting 100 mph with a filthy slurve. He made up for what we had lost when Mariano Rivera retired, and then some. I don't expect him to maintain this dominance for as long as Rivera did, but I'm going to enjoy this run while I can.

For about $20, I picked up his 2012 Bowman Chrome rookie autograph refractor numbered 120 of 500! I had a TriStar sticker autograph of his already, but I needed something flashy of our flashy arm.

All in all, I'm more than happy with my recent additions. See Ya!
Posted by Drew at 8:23 PM