J-Hey and Bring the Rain!

Hey everyone, Drew back here! I must say, I've been spending most of my time lately feeling rather jealous of all of those who spent the last weekend in Chicago. However, if all does work out, I do plan to attend next year's National Sports Collectors Convention in Atlantic City, NJ. I'm already really excited for the show, but most of all in getting to see my buddies William, Andrew, and Frankie!

In the meantime, I'll continue to pick up an autograph or two for the right prices on eBay. Two of my most recent impulse buys are as follows: 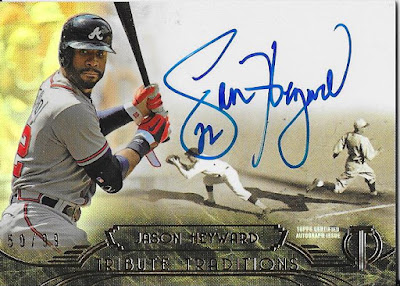 Out of 2014 Topps Tribute and numbered 50/99 is this Jason Heyward autograph. I bought this card for under $10, despite my mixed feelings for Tribute's 2014 autograph design. I don't understand or see the point in the old time players on every card. They simply don't fit in, at least in my mind. Heyward is perhaps the best defensive outfielder in the game today, and though he hasn't gotten quite to the level of superstardom that was expected of him as a prospect, he's been more than serviceable through his first 6 years. In addition, I absolutely love that as his career has evolved, his signature has only gotten nicer. That was a big draw for me when I made this purchase.

This card is available for trade or sale at the right cost. 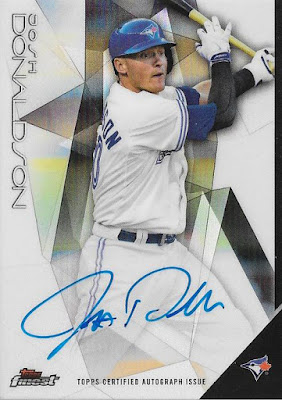 This one, however, is not, and most likely will not be for sale or trade anytime soon. For years, I had played third base for my school baseball team, and I learned from experience that is quite possibly the most difficult position to field (besides catcher) on the diamond. It is rare to go one game without having a rocket pulled right at you, and your reaction time needs to be exceptional to field it well. I looked up to Evan Longoria and David Wright in particular, because they were well rounded players that could handle the hot corner better than practically anyone.

As time has gone by, Wright and Longoria are no longer the same players, and this year I began to really enjoy watching Josh Donaldson play. He has since become my favorite third baseman in baseball, but considering he set the All Time All Star ballot record for votes, I'm certainly not alone. Which is why I'm even more happy to have picked up his 2015 Topps Finest on card autograph for below $10! Donaldson is batting .293 with 27 home runs and 77 RBI this season, and is on pace to set multiple career highs. Not to mention, he also has dazzled on defense.

Don't get me wrong, Rockies fans. Nolan Arenado is a heck of a lot of fun to watch as well. But being in the AL East gives me ample opportunity to watch this man bring the rain, and I really do enjoy it (except when he brings too much against my Yankees).

Until I spend more money on eBay, See Ya!
Posted by Drew at 4:36 PM