Hey everyone, Drew back here! After working the summer away, covering for everyone going on vacation, it is officially my turn to kick back and relax. While I'm gone, I figured I would take some time to catch up on all that I have yet to post. Believe it or not, I haven't done a TTM Mailbag post since May 24th. Unfortunately, I've only gotten 3 successes in that span, and while having an iPhone malfunction, my note detailing all of my TTM batches was lost. I don't know how long any of these returns took, but a success is a success nonetheless. 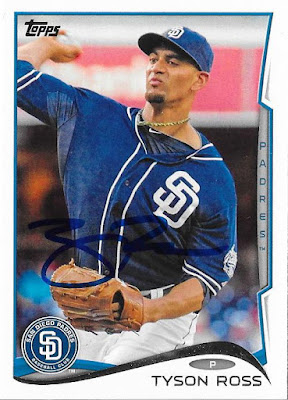 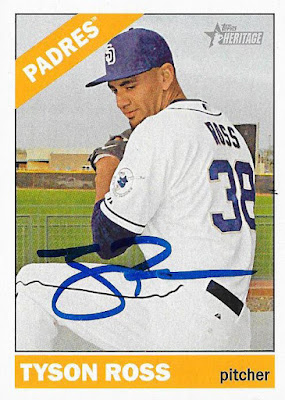 Ross has been a staple of many of my fantasy teams this year after posting phenomenally underrated numbers in 2014. He has recently been impressive, but this season has for the most part not been very kind to the young Padres stud. I was hoping he would be moved to a better offensive team at the Trade Deadline, but San Diego instead chose against selling their stars, which hurt teams such as my Yankees. He signed two cards for me in about two months, and the 2014 Topps looks better in person than in the scan. The Heritage card isn't my favorite shot, but any card from that product looks excellent signed in my book. 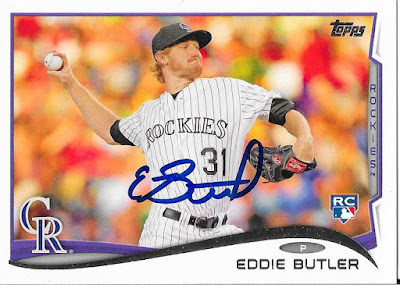 The Rockies top prospect pitcher that isn't Jon Gray signed his rookie card for me after again, about a two-three month wait. Butler was highly regarded as a prospect, but his stints in the majors have not gone as planned. In 15 starts this year, he has gone 3-9 with a 5.50 ERA, and unsurprisingly, much of this is due to pitching over half of his starts at Coors Field; the worst pitcher's ballpark in baseball. I would like to see him traded so he could fulfill his potential, but a trade does not seem to be in the imminent future for the 24 year old. 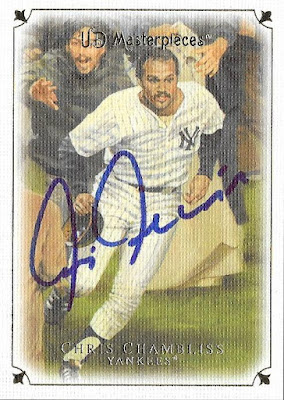 Ever since I first saw this card of the Yankee playoff hero, I knew I would one day have a signed copy. Upper Deck Masterpieces is one of my all time favorite sets, and I'm almost glad that Upper Deck no longer makes them. I've grown a bit sick of Allen & Ginter, which has been one of my personal favorites as well for years, so I'm glad only two full Masterpieces sets were ever produced.

Chambliss is one of the few 1970's Yankees stars my Dad and I have yet to meet. He was recently announced as part of a card show lineup in October, so I may consider saving up to have him sign a photo chronicling his famous 1976 ALCS Home Run against the Royals. Outside of his home run, he was a big part of their championship seasons in 1977 and 1978. This card was signed in about a month's time!

Until more comes into the mailbox, that will do it for this edition of my TTM Mailbag. See Ya!
Posted by Drew at 2:54 PM