Hey everyone, Drew back here with the second installment of my 2015 East Coast National recap series. Before I begin, I just want to say that with all the stuff I need to catch up on, the Ten for Tuesday posts will start back up in September. I've got various new, great ideas ready to go, and I'm looking forward to sharing them with you all!

The big draws of the day at the Westchester County Center were Cal Ripken Jr. and Steelers greats Franco Harris and Hines Ward. I had already met Cal before, and with his expensive ticket prices, I decided to spend my money elsewhere, while the Steelers prices were far too high for a Jet fan to wish to pay. Instead, I bought tickets for three legendary players of their own rights; Al Kaline, Eddie Murray, and Brooks Robinson. 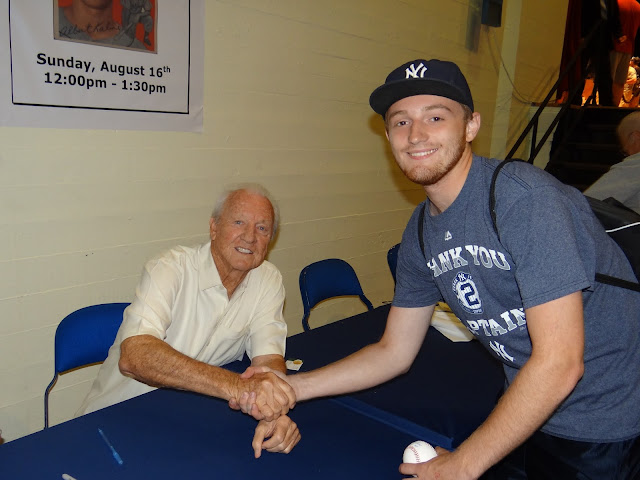 All three began signing at 12:00, and I immediately hopped on the Kaline line. I have heard some horror stories in the past about Mr. Tiger being moody, but luckily today he was all smiles. It was his first appearance at one of their shows, and I was towards the front of the line. He didn't say much to me, but was friendly, shaking my hand for the photo and thanking me for coming out. 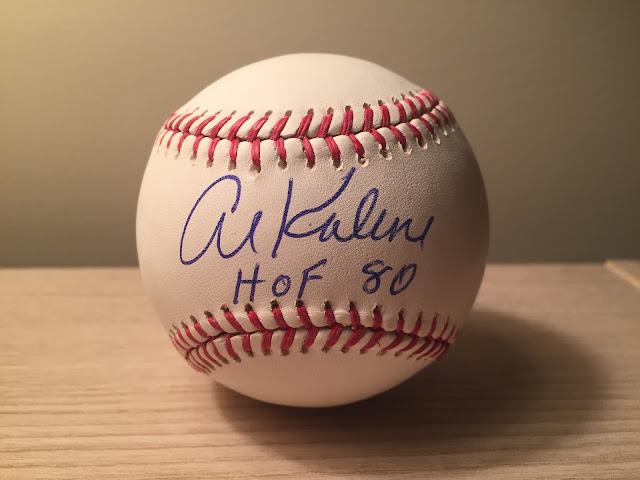 I couldn't have received a better autograph from the man who once accumulated 3,000 hits and made 18 All Star teams. He inscribed his Hall of Fame year for free and gave me precisely what I was looking for. For 80 years old, he looks to be in excellent health, and it was nice to get a chance to meet him considering he seems to rarely make New York signings. 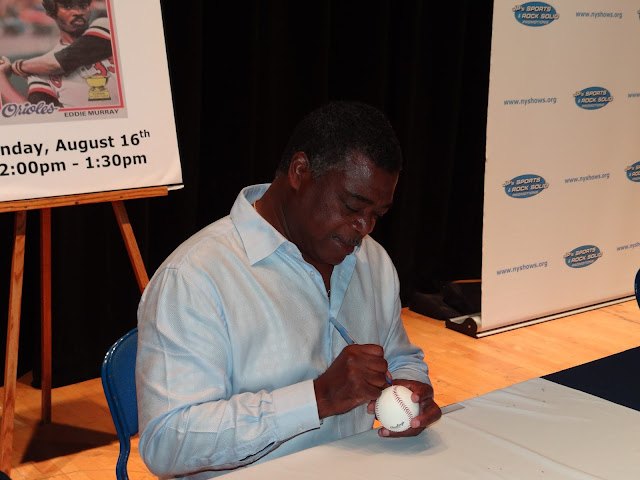 Eddie Murray was up next, and I could not wait to have a signed ball of his to add (along with Kaline's) to my Hall of Fame ball display. I've never heard anything particularly bad about him at signings, although he was once heralded as "bad with the media" during his career. After looking into it more, it just seems like he was a quiet, independent man that really just wasn't looking to be bothered. When I met him, I certainly got that vibe. 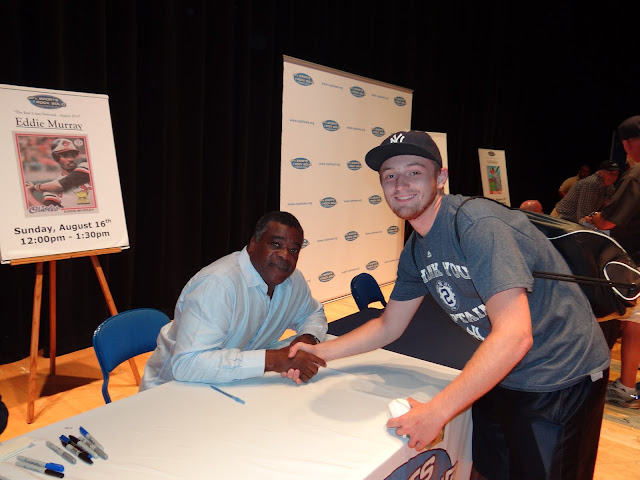 I didn't get much out of Murray either, but he was friendly enough to take a quick photo with me. Whenever I think of him, I think back to the days of the Grandpa Roy Column and the list we compiled of what is now 5 players in history who retired with over 3,000 hits and 500 home runs. Alex Rodriguez joined Hank Aaron, Willie Mays, Rafael Palmeiro, and Murray when he recorded his 3,000th hit in 2015. It's an extra exclusive club that should warrant a Hall of Fame induction statistically, but most likely will not in the cases of Palmeiro and Rodriguez thanks to their ongoing PED allegations. 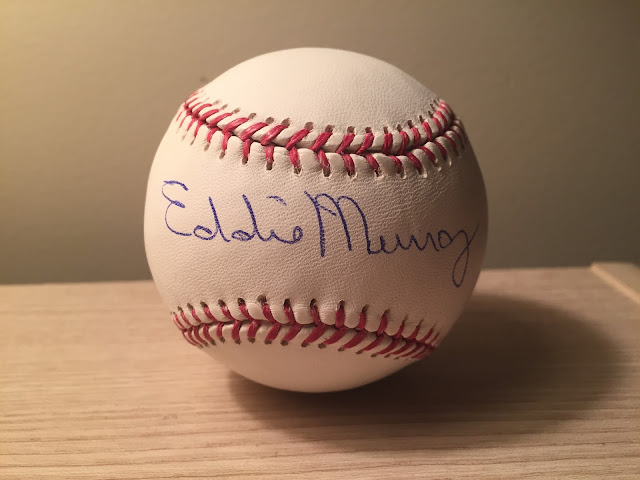 Murray really took his time in signing the ball as eloquently as possible. For the price I paid, he better have. It came out really well, and I'm glad I saved up to add him to my collection. This is now my 21st signed Hall of Fame baseball, and I believe that means I'm slowly but surely catching up to William. One day... 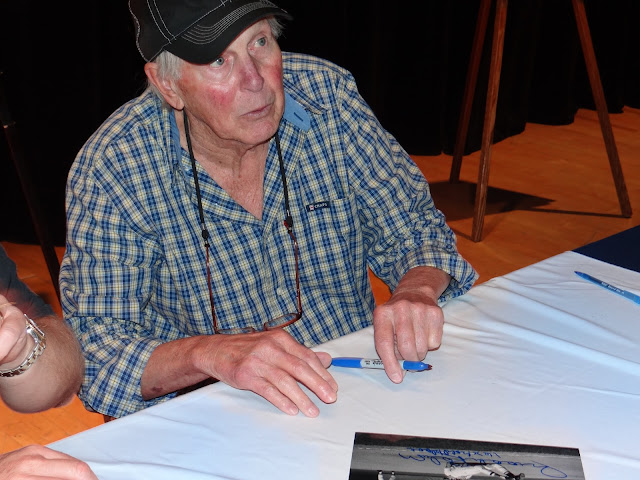 Finally, the player I had most been looking forward to shaking hands with. I always say how I forever have a deep love and respect for the third base position, and this man was the epitome of mastering the position. Some consider him the greatest to ever man the hot corner, but everyone calls him the best defensive player there without question. He's also one of William's favorite players, which gave me extra incentive to want to cough up the money to meet Brooks Robinson. 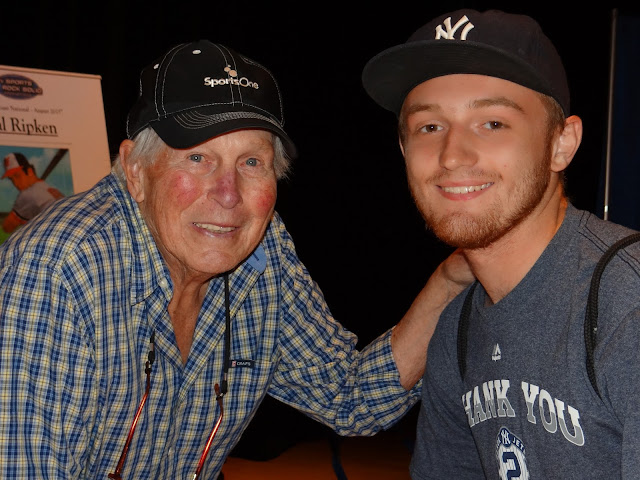 18 All Star Games. 16 Consecutive Gold Gloves. 2 World Series Rings. What didn't Brooks do? Beyond the numbers, the sparkling plays, and all of the trophies he can proudly display, what stands out over anything is the man that Brooks is. I was proudly wearing my Yankees gear, but that didn't keep him from treating me as if I were wearing his jersey and an Orioles cap. He has certainly seen his best years already, but he seemed to really want to make an impact on others as simply and sweetly as he could. The first two experiences were pretty quiet, but Brooks was as kind and polite as could be, and totally won me over for the day.

Props to Dad by the way for getting an awesome picture of Brooks and I. 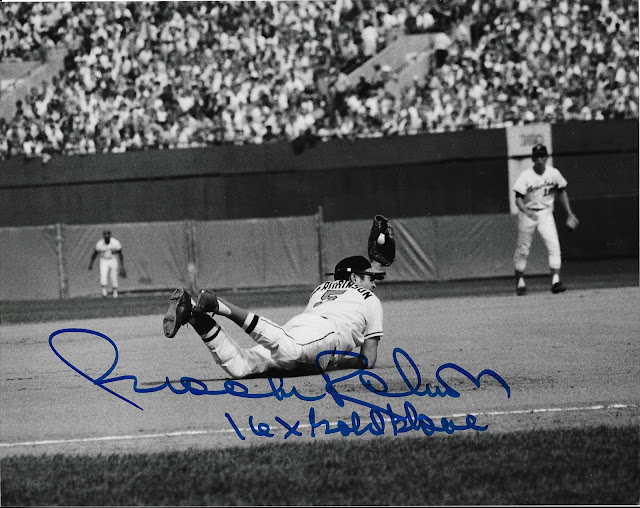 Since my Dad bought me a signed baseball of his for my birthday a few weeks ago, I had to scramble to find something to have him sign. I mostly paid for his autograph to meet him rather than for the autograph, but I decided to have him sign an 8x10 of his famous World Series diving stop against the Cincinnati Reds in 1970. For his great all around performance (and especially phenomenal defensive plays), he was awarded the World Series MVP that year.

There was a free inscription along with any Brooks autograph, and I chose the 16 Gold Gloves over the Hall of Fame and World Series MVP because it says more about him than either of the other two. Many have been inducted into Cooperstown, and many have been named MVP of the Fall Classic. But no position player has ever won 16 Gold Gloves but Brooks (Greg Maddux and Jim Kaat did as pitchers, but that is besides the point).

Brooks was everything my Dad and I had hoped he would be, and then some. I'm going to proudly place my signed photo in my nice signed photo book to show off in the future.