Hey everyone, Drew back here! Yesterday, my Dad and I attended JP's Sports & Rock Solid Promotions' "East Coast National" for the seventh consecutive year. It is absurd to me thinking that I shook Dave Winfield's hand while in line for a hot dog at Nathan's that long ago. Time has truly flew by in my years with this spectacular hobby. Typically, we have gone to several shows in Westchester per year, but it had actually been a full year since we last stepped foot into the building that has brought us so many wonderful memories. The last show we went to was at a Hilton hotel in New Jersey, and prior to that was last year's East Coast National; where we met Johnny Damon, among others.

This year, I decided to save up more than my typical card show budget and treat myself to a fun day. I didn't come home with too much, but the quality surpassed the quantity in this case. Take a look at some of the better cards I was able to add to my collection: 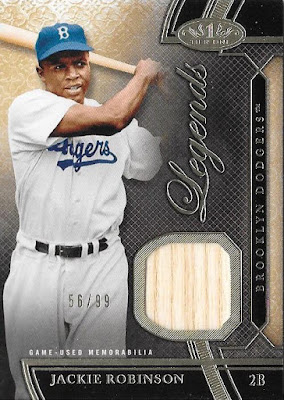 We start with what has been a common theme throughout the blogosphere this summer (or at least in the cases of my buddies Frankie & Andrew, who both picked up relics of his at the National recently). I am now the latest to add a piece of Jackie Robinson's famous lumber to my PC. Believe it or not, despite doing the Tier One relic set in 2011 and collecting other historical relics throughout the years; this is my first Robinson relic! I think I made the right call on this beautiful 2015 Tier One bat card numbered to 99. There is a certain aura to the card, and from the second I saw it I knew I would make sure I left with it. 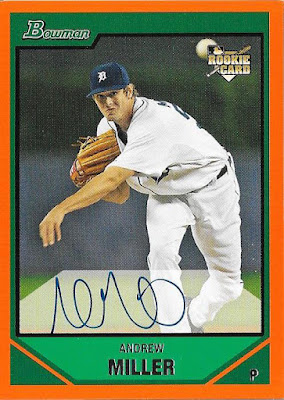 Next up, here was a quick impulse buy for only $10. Andrew Miller has been a reliable closer in his first year in New York, and has made Brian Cashman look like a genius for signing as opposed to familiar face David Robertson. Miller has out-pitched Robby thus far into the season, and the Yankees received a compensatory first round pick for letting go of Robertson. There was a great deal of hype surrounding Miller when he was drafted 6th overall by the Tigers in 2006. He never worked out as a starting pitcher, and was dealt to the Marlins in the deal that landed Detroit Miguel Cabrera. Ever since, he has evolved into a top tier reliever capable of retiring both lefties and righties effectively. This orange parallel was once a hot seller, but it became mine for a bargain. 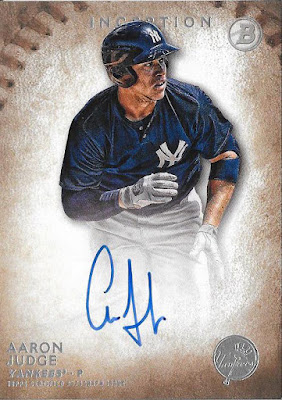 Woah, buddy. Aaron Judge. I've been counting down the days until the Yankees call him up to replace Carlos Beltran in right field, and I'm hoping he at least gets a call up this September to help out down the stretch. Judge is a big part of the reason no major moves were made for the stretch run, which was a tough decision to make considering all the talent that could help fight off the Blue Jays right now. Ultimately, Cashman made the hard, but right move for New York down the road. He is a 6'7, 275 lb. beast of a hitter, and if he can work through some plate discipline problems he may be a future All Star. For $20, I needed to take the gamble with this Bowman Inception autograph. I came so very close to pulling the trigger on a graded 10 Bowman rookie autograph, but I didn't want to pony up and hand the cash over. We'll see if I regret that down the line. 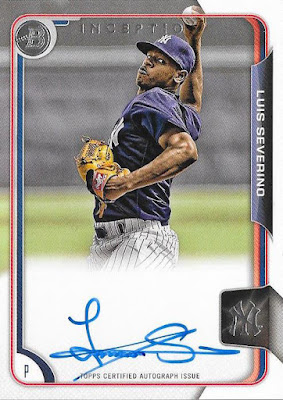 Meanwhile, we already have gotten a glimpse of our team's consensus #1 prospect, pitcher Luis Severino. And, as far as I can tell, this kid is going to be awesome. Yesterday, he showed a lot of poise in holding the Blue Jays to 3 runs over 6 innings; striking out 9 in the process. If Carlos Beltran didn't lose a ball in the sun, he may not have given up any runs. What amazes me is that although the Yankees lost a big game against our current division foe, the most important takeaway is that Severino is ready and here to stay. I can definitely get used to that.

I managed to grab this pristine 2015 Bowman Inception autographed card of his for a very reasonable price, especially given that I bought it in New York. After doing a little research, I realized that these Inception autographs are much harder to come by than the Judge card above. The card is actually from Bowman Inception, despite featuring the flagship Bowman design. They sell for a much higher amount than what I paid, and I've even considered getting the card graded because it's in excellent condition. 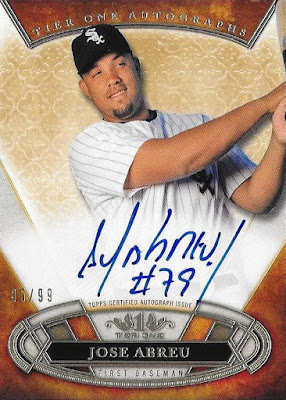 My final pickup of the show was one I'm sort of surprised I made. I am a big Jose Abreu fan, but I didn't even think about adding his autograph at the show. Instead, I wanted to focus on making sure I got the Yankees top prospects and some of the better all around pitchers in the game. But, nothing ever goes as planned at these shows, and I bought this absolutely amazing Tier One autograph of one of my now annual fantasy keepers for again, a great price.

Abreu may not match his 2014 breakout rookie season in 2015, but he appears to be improving each and every week. After starting the year rather slowly, he has since picked up the pace, batting over .300 in both June and July. The White Sox made a smart business decision in signing the Cuban slugger to a team-friendly 6 year, $68 million dollar deal.

Well, that will just about do it for this recap post. I'll be back soon with more pictures and autographs with some special Hall of Fame players, among many other exciting things.