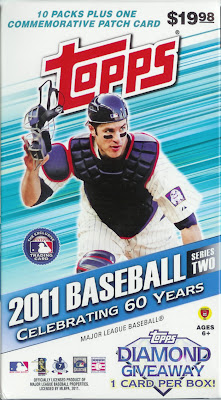 Hey guys, Drew back here. About a week or so ago, right before I left for New Hampshire, we stopped at Wal-Mart for some groceries and other stuff. I hit up the card aisle and walked home with a blaster of the new 2011 Topps Series 2 baseball, as well as the collector's recent hit, the Topps "Value Box". I haven't bought much of anything new card wise this year, but I definitely wanted to check out the new series as well as the recent rave over the actual "value" in the Value Boxes. Take a look at how I did: 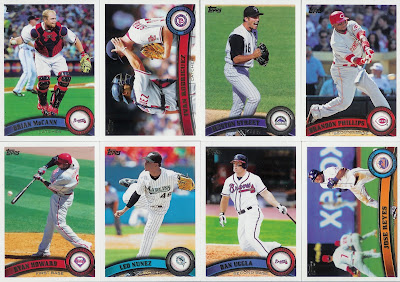 I first tried out the series 2 blaster box, and here were just a few of the notable base cards. I didn't pull a single notable American League player, and if you may have noticed, this blaster was filled with stars of the NL East! My favorite base card I pulled was either the pumped up Huston Street or the Jose Reyes. The cards look pretty good as always, but there still was a lot of typical, boring pictures. 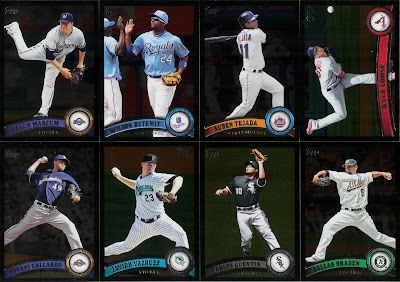 Also, a staple in the Wal-Mart Topps products is now the black back cards, where only the player is shown in color but the rest of the card, including the border, is black. I pulled some decent ones in the 2 packs that are like this, but none that I really want to hang on to. 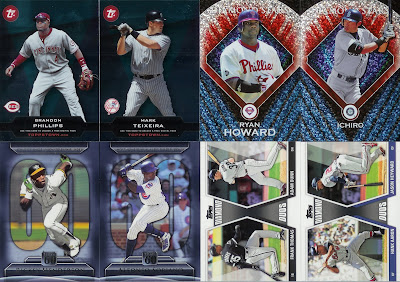 Next were some of Topps' inserts, many of them have already been extremely overdone. But, wait, is that shiny I see? Topps introduced the "Diamond Stars" insert in this series, and I pulled Ichiro and Ryan Howard. I actually really like the looks of these cards, but everything else is very boring and redundant.

Hey look, more reprinted boring cards! Sigh. When will Topps learn that I really don't reprints of cards from the past 10 years. Next year, I will get on my knees and pray that us collectors won't be fooled again! 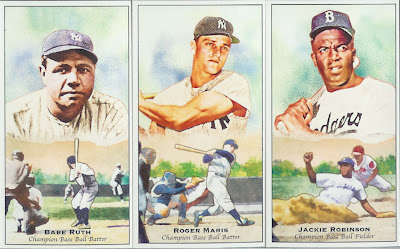 Next is by far my favorite insert of the year, the new Kimball Champions set. While Series 1 was mostly devoted to current players minus a few legends, Series 2 is all former greats of the game. As you can see, I pulled some pretty good ones, in Ruth, Maris, and Robinson! 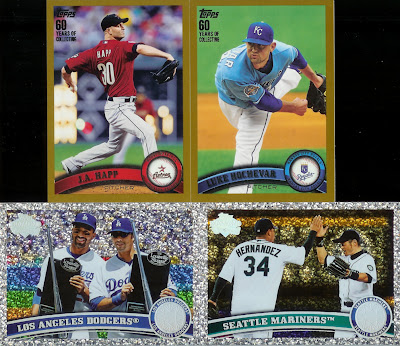 Next are the parallels, which are pretty nice. The gold cards are getting very bland and unexciting now, and while Topps thinks its a great idea and a tradition, it's old, and boring, like that sandwich you'd find in your locker on the last day of school that's been rotting there for months. The diamond cards are new and very nice looking, but I sure hope after this year is over that they won't go back and make another "tradition" of them. 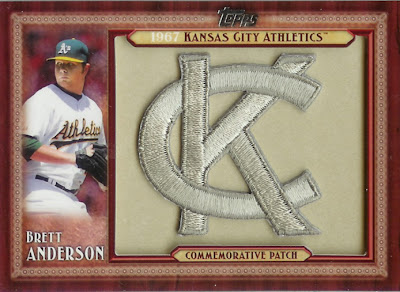 Finally, my commemorative patch pull was of Athletics pitcher Brett Anderson. I don't quite get these cards very well. If you're going to feature an old school logo, this being from the 1967 A's, why wouldn't you feature a player from that team? The patch looks cool, but throwing Anderson on there does not quite make sense to me. Oh well, I guess you win some and lose some, especially in this hobby.
After a very "meh" blaster, we move on to the value box. In this box you get 5 packs of 2011 Topps Series 1, as well as two packs of this year's Topps Heritage, 2 diamond giveaway code cards loose in the container, and a Legend Chrome Refractor. 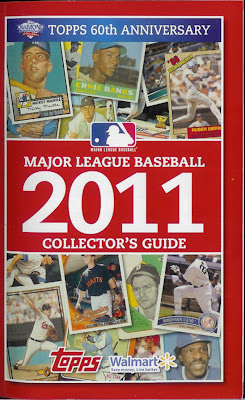 Also included is this MLB Collector's Guide, which brings collectors through every year of Topps' history, spanning a different star player for each year. It's a great way to teach the younger audience about the hobby, in case you were looking in getting a son or someone you know interested in the hobby. 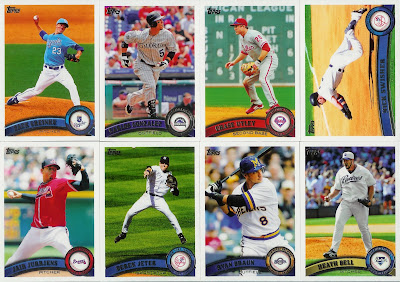 I know you are all sick of seeing these same Series 1 cards over and over again, but 1 thing I do want to tell you is if you need help with your Topps set, send me a wantlist and I can help you out, because, since I won the factory set, most, if not all of my base are for trade. 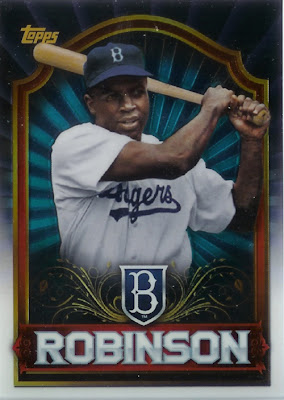 My chrome refractor turned out to be of Jackie Robinson, rather than Babe Ruth or Mickey Mantle. While I would have much preferred one of the Yankees, you can't not like a card of Jackie Robinson. The card looks beautiful under a light, with great reflection and shine to it. If anyone has a Mantle or Ruth I would trade this for it though. 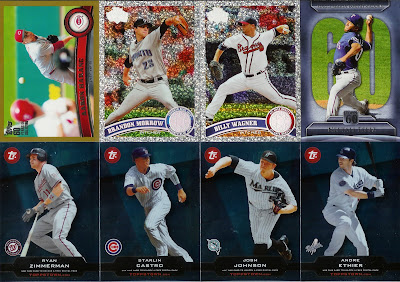 Here are the same old inserts as always, with a Toppstown in each pack (didn't scan Mike Stanton), and some diamond inserts of Brandon Morrow and Billy Wagner. 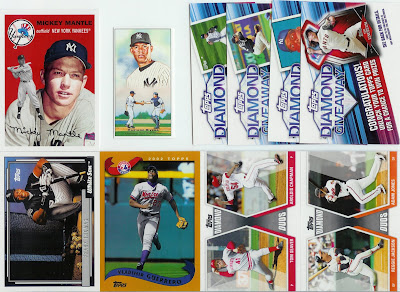 Minus the lower group of cards in this scan, here are the better looking inserts I pulled. I love the Mantle "The Lost Years" insert, and I wish that was a real card and not just a made up insert. The Rivera Kimball Champions is a favorite of mine as well, definitely staying in my collection for a while. The Diamond Giveaways were all accumulated through both boxes, and there were 4 total. I was hoping to pull a Diamond card but instead I pulled a few cards from 1973, Danny Cater and Alex Johnson. 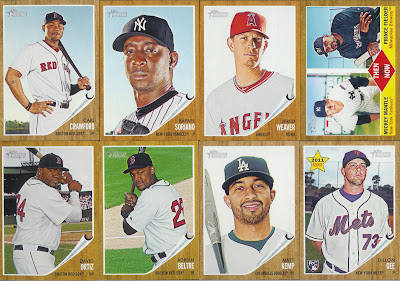 While the flagship product didn't treat me overly well, Topps Heritage certainly did. In the 2 packs, I pulled a Then and Now insert of Mantle and Fielder, as well as some star players and solid rookies. 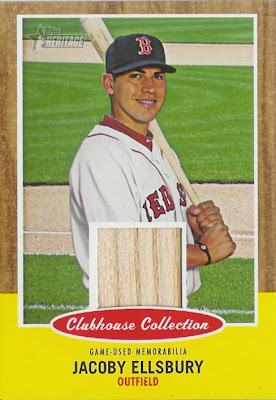 I got very lucky in one of the Heritage packs as well, pulling this bat card of Jacoby Ellsbury! Talk about some good value! Ellsbury has been excellent this year for Boston, and it's a pretty good pull if you ask me. It's for trade for any Yankee though, since you all should know how I feel about Boston!

All in all, the value box, which was $5 less than the blaster, certainly had more value than the blaster, so keep that in mind the next time you visit a retail store. Again, most every card that isn't of a Yankee is for trade, so please contact me at yanks1996wsc@gmail.com. For most of the base/inserts I'd be interested in trading for anything in my wantlist on the sidebar. Thanks everyone!