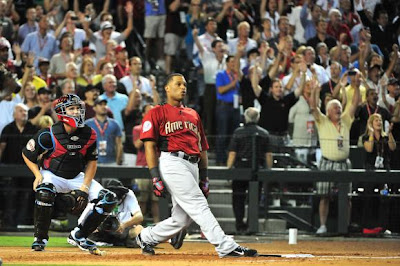 Hey everyone, Drew back here. So, I have a feeling that some of you are surprised I didn't get to posting anything about Robinson Cano's epic home run derby victory over Adrian Gonzalez, but I've been very busy doing all sorts of things lately. So, let me start off by saying congratulations to my man Robby on winning the derby! I watched the entire thing and he was incredible all night. After Gonzalez dropped 11 in the final round, while I had a lot of confidence for one of my favorite players, I thought he had no chance to top that. But, like he tends to do often to me, he completely shocked me, blasting 12 balls over the fence at Chase Field.

I learned something about Robinson Cano that night however. Even as a diehard Yankee fan, I never really got to know the real Cano. When he won, he said to the media that he wished to cut in half his trophy so that he can share the other half with his Derby pitcher and father Jose Cano. Cano has been very outspoken in his short 7 year career, and you never see him getting interviewed following a game unless he's about to get pied in the face. Honestly, I barely knew anything about him except for the fact that he hits the heck out of the ball season after season and may be the best second baseman in baseball today.

It's weird to me, because while Yankees fans love Cano, and he is respected a lot through baseball, I still feel like he's underrated. In a way, while I'm super happy for him to be on the Yankees, I feel like he'd make a bigger name for himself by going to a different team. He outplays Jeter, A-Rod, and several other star Yankee players, yet isn't as highly popular and touted as them. One day, if he keeps up this incredible pace, which is the most hits for a Yankees player at his point of his career minus Joltin Joe DiMaggio, he could have a plaque in Cooperstown.

I started collecting Cano almost 2 years ago, and have acquired almost 150 different cards of his. It's nothing spectacular, but I was lucky to invest in him before everyone else soon realized how good he really is. Not that I plan to sell any of his stuff that I own, but knowing that the cards I spent a good amount of money on went up even more is so nice to see for me.

All in all, while collectors spend a good $30-40 for his autographs now, I've got a solid 6 to hang on to, and I'm glad I took advantage before he got to superhuman status. Robby seems to be a player that kids can look up to, including me. As a ballplayer myself, I like to stay quiet, and be a leader in the best ways I can without being ultra loud and obnoxious.

So through his epic finish in the Home Run Derby, I was not only proud to be a Yankees fan but incredibly proud to have known that one of my favorite players proved just how good of a person he truly is, and made me look good for liking him in the first place!

Here's to many, many more accomplishments Robby! See Ya!

P.S. We may very well have a guest post coming soon from someone that may have attended this awesome event!
Posted by Drew at 12:11 PM