Hey everyone, Drew back here! I know, it's been a couple days, but I have been so loaded with baseball lately, from camp in Dutchess Stadium, my local ballpark, to my summer baseball league. But anyways, at this point, I'm gonna go broke of Dodgers cards. Why? Because for some reason most of the fans that want to trade with me are fans of the Dodgers, oh, and I have a knack for pulling Dodgers cards. So, recently two of these very Dodgers fans contacted me about a possible trade. The first to contact me was Michael, the author of Nomo's Sushi Platter! I've never made a trade with him before, so it was cool to meet a new blogger wanting to make a swap with me. Here's what I ended up getting from him: 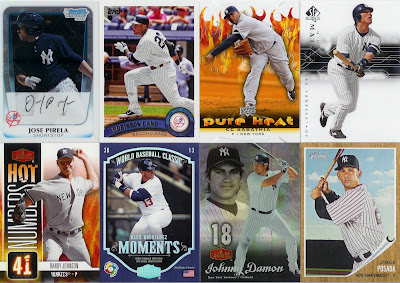 I haven't made a whole lot of trades lately, mainly because I've been really out of it lately with the hobby and have had so many other things going on. While I have pile of Yankees base laying around, I always loved these trades, where I would get cards for all my different collections. Michael certainly knew how to treat me, sending all sorts of cards of Yankees, some even being guys I specifically collect, like Robinson Cano! Plus, it can be nice to finally add an older card of A-Rod that I didn't have like 10 of, with the World Baseball Classic insert. 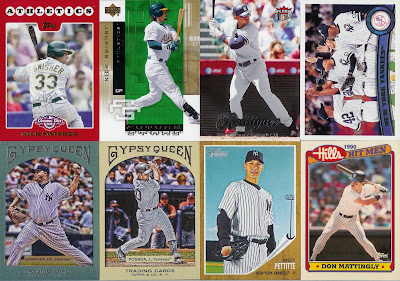 Next were some more miscellaneous Yankees cards, featuring a few of Nick Swisher, and some 2011 Topps Gypsy Queen. I think this product was very underrated, because, minus the autographed cards they included in so called "gypsies", the design was very nice. Probably would've been better had Topps not screwed up the autograph collation as always. My favorite part of Gypsy Queen was definitely the framed parallels, like the one Michael included of CC Sabathia! These green framed parallels are retail exclusive, and they look really sweet in person. 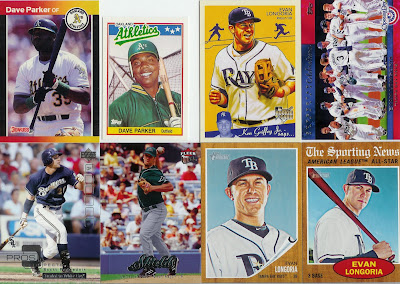 One thing new with this trade that's never been done before in my trading lifetime, was that he also included cards from my failed "Secondary Collections" page. I don't think anyone ever referenced to it through trades with me, so I gave up on updating the page. Now, I have more work to do, because Michael threw in quite a few former Renegades such as Shields, Podsednik, and Longoria! Also, he sent me a few Dave Parker cards, which was cool because I haven't added new cards of him in forever!
So overall I was really happy with this trade, thanks so much Michael, I look forward to more trades in the future! Next was a trade from a somewhat frequent guest of my blog, Greg from Night Owl Cards! While he and I have traded several times in the past, it sure has been a while between us. Take a look at how this one went out: 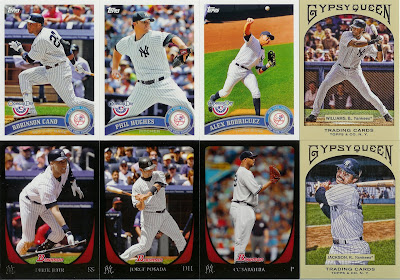 Jeez, I almost forgot, 2011 Allen & Ginter has been out for weeks! I've always been all over that product I thought, but this year, not much will get me to run out to Walmart or Target, especially with the ridiculous price tag on all of the products this year. While Greg didn't send me anything from Allen & Ginter, he caught me up in a few sets I could use some cards for, such as Topps Opening Day, Bowman, Gypsy Queen, and even Heritage! I hadn't even seen any Bowman cards in person until Jeter, Posada, Sabathia, and Granderson landed in the mailbox. They don't look horrible but then again, they're not going to make me wanna buy them. 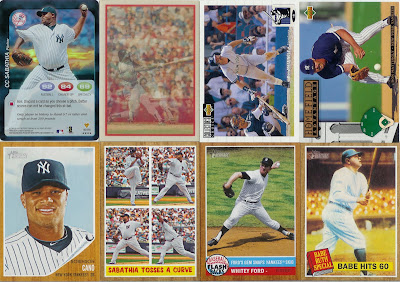 Next were the usual random and fun assortment that the Night Owl loves to throw into the packages. Yeah, I have thousands of Yankees cards. But somehow he always seems to get me some I didn't have yet. Like those 2 Don Mattingly cards, that pushed me up over 150 cards of his! 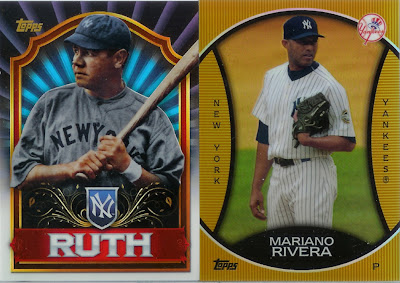 My favorite cards from this package, however, both were Topps retail exclusive cards from the past couple of years. One being the Babe Ruth card out of the Topps value boxes from this year, and the other being a Mariano Rivera from the "cereal boxes" Topps came out with in 2010. Both cards have a particularly nice shine to them, and I'm a sucker for these cards, as overdone as they are.
Thanks again Greg for the trade! Hope we can work out more deals in the future!
See Ya!
Posted by Drew at 7:46 PM