Hey everyone, Drew finally back here after a long and fun week with my mom's entire family up in New Hampshire! We had a good time, even though my dad didn't get to go with us this time around. While we were, gone, I've heard from a few people that Derek Jeter is now 2 hits away from 3,000. Just kidding, you can't go anywhere, even in Red Sox Nation without hearing that! I definitely am going to tune in for that game and theres no way I'll miss it. Also, Hall of Fame Manager Dick Williams passed away due to a aneurysm on July 7th, at the age of 82. I'd like to send my condolences to his family, and a R.I.P. to Mr. Williams.

So, I might as well get back to the whole catching up deal. I guess I'll start with a nice trade I met with Chad, one of my readers. Chad contacted me, interested in a few of my autographs, and we made a nice trade, resulting in these cards going into my collection: 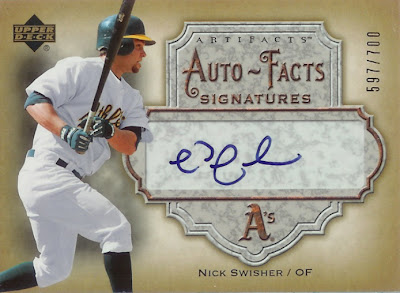 The first card turns out to make a milestone in my collection! Out of 2006 Upper Deck Artifacts, I got the Nick Swisher autographed card numbered to 700! Swisher is one of my favorite players, which is proven by the fact that this is now my 10th different autograph of his! Swish has had a very slow year, which pretty much could mean that the Yankees will cut ties with him by the end of the year. He's started to pick it up of late, but thus far, halfway into the season, I would've thought he would have done better than he has. This card is still real sharp, and the autograph looks good, even if its a terrible signature. 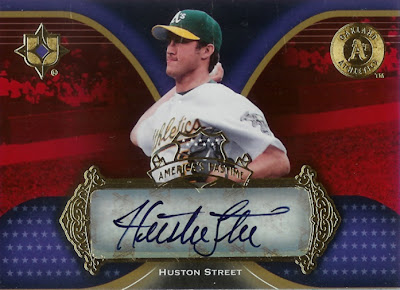 The second card, out of 2007 UD Ultimate Collection, is a Huston Street autograph! Huston has been my star fantasy baseball closer this year, and although his ERA is fairly high for a closer (3.46), he has been very effective this year. I've been looking for an autograph of his lately, which I have to say has to be one of the best signatures in current baseball, and I'm happy Chad was able to get me one.

All in all, it was a real fun trade Chad, thanks so much, and I'll See Ya guys later!
Posted by Drew at 8:56 PM