Revealing the Mysterious Binder... A Little at a Time... Oddball Cards!

Hey guys, Drew back here. So, this has been an ongoing, never ending series of sorts. It sure has been enjoyable, looking back at how lucky I got with this binder, with hundreds of incredible cards just laying there for me to take. I've highlighted the likes of Stan Musial, Willie Mays, Hank Aaron, Sandy Koufax, Roger Maris, Yogi Berra, and Mickey Mantle already, who had arguably the most cards of anyone in the binder. But now it's time to focus on the other stuff, because this binder was filled with really neat stuff. For instance, the oddball cards featured in the binder were pretty cool. Check them out: 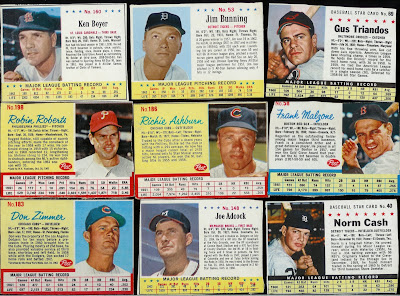 First are of some of the highlights out of the 1961, 1962, and 1963 Post sets! As you may remember, I did get the Hank Aaron card (2 actually), but since you've seen it I left it out. A couple Hall of Famers were in here, Jim Bunning and Robin Roberts, and then just a few guys that had solid stats but not Hall of Fame material. He cut some of the cards out very badly, which kinda sucks, but he cut the Hall of Famers out perfectly. 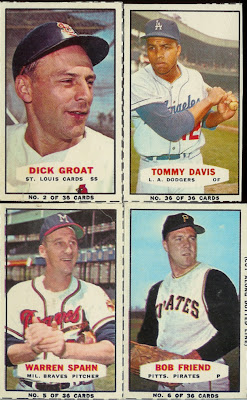 Next were some 1966 Bazooka cards, of Dick Groat, Tommy Davis, Warren Spahn, and Bob Friend. Again, I did find the Mickey Mantle card as well, but you've already seen it. These cards are about the size of the Allen & Ginter minis, and they're made of a really cheap stock. They're nothing spectacular but I do like the players I found from it.

From 1963 Bazooka baseball, I found minis of "All Time Greats" Johnny Evers, Walter Johnson, Ban Johnson, Harry Heilman, and Wilbert Robinson. These are probably my favorites of the oddball sets, just because of the gold look and nice design. And everyone loves floating heads! 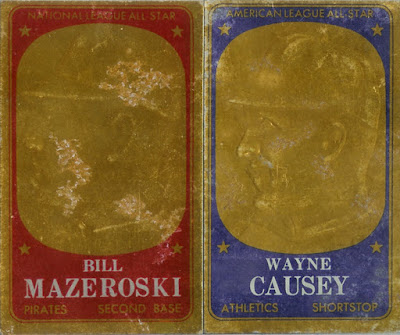 Next, I found 2 cards from the 1965 Topps Embossed series, of Pirates Hall of Famer second baseman Bill Mazeroski and Athletics shortstop Wayne Causey. Apparently this set is 72 cards, and were placed in packs almost like inserts in the 1965 series. The players faces were all embossed onto the gold foil/cardboard background, and there are 36 representatives from each league in the set. These are really beat up, but they're very unique and I kinda like them! 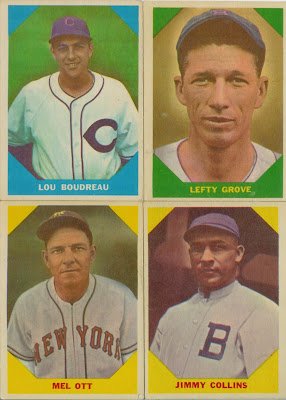 Lastly, these may not be considered oddballs, but at the time, Fleer was just beginning! These 4 cards, all of Hall of Famers, are from 1960 Fleer. Lou Boudreau, Lefty Grove, Mel Ott, and Jimmy Collins are 4 of the 79 former greats featured in the set. The color variation makes the design more pleasing as a whole, but the photos do it for me, rather than the design.

What do you all think about some of these sets? This may be the least valuable post of the 'binder' series, but I wanted you guys to see just how cool this really was to look through!