Perhaps the Greatest Night of My Life! 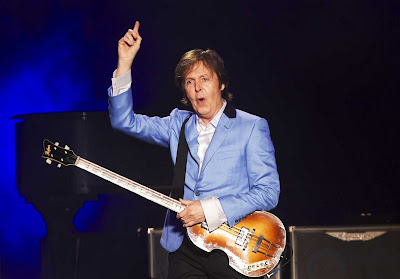 Hey everyone, Drew back here. So, on Friday night, as I told you guys, I saw Paul McCartney play in Yankee Stadium! I have to say it was everything I could've possibly hoped for, and then some! McCartney played for two and a half hours straight, with not one but two encores, with 35 songs in the entire set! His variety was very nice, with many songs from his Beatles days as well as his Wings days, and a bare minimum of his newer selection. Also, he was great at working the crowd, saying "Who's that Derek Jeter guy? I heard he has more hits than me!" That gave us all a good laugh and he went right back at performing some incredible songs, such as "Helter Skelter", "Get Back", "Live and Let Die", "Hey Jude", "Back in the USSR", "Maybe I'm Amazed", "Band on the Run", "Let It Be", and many, many more. He ended the concert with the "Golden Slumbers/Carry That Weight/The End" medley, which was absolutely incredible.

So, I don't know if I'll ever see a better concert in my life! This concert has to be one of the top concerts you could possibly see right now. Paul is 69 years old now, and for a guy that age to play that long in front of a sold out Yankee Stadium crowd, it's truly unbelievable. Also, his voice may not be as good as his prime of his career but it still sounds better than 90% of other performing artists out there. He has a god given talent, and I'm so fortunate to be able to have had this opportunity.

Anyways, I forgot my camera in our car while we ran to the train, because we were in a big rush to make it. I took a few pictures with my phone and iPod, but nothing was overly spectacular. Our seats were far out, but even though they had a good angle, the iPod camera is not very good at all. So I guess to show you what I witnessed, here's a few quick videos from YouTube.

Words could not explain what was going through my head while this went on. But all I know now is that I just witnessed a former member of the greatest band of all time absolutely dominate the stage in my favorite place in the world. Wow.
See Ya!
Posted by Drew at 1:07 PM