Hey guys, Drew back here. So, I haven't really exploded on this blog like I expected to this summer, but what can I say, I've been pretty busy! Also, other than eBay, I haven't felt much interest in the hobby lately. Like I've said, I still haven't wrote one letter yet for TTM's this summer, and I just completed a couple of trades for the first time in forever. Allen & Ginter is out, and while it looks nice, I can't afford to go out and buy a box. I guess I'll have to stick with eBay for a little longer until I can get my hands on some Ginter, because I still plan on building the set when I can. Anyways, I got a TTM success back sometime last week, and I finally got to scanning it, so here it is: 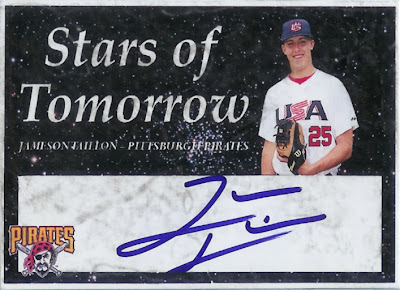 Yep, none other than the second overall pick in last year's draft following Bryce Harper, Mr. Jameson Taillon signed a custom for me! I would be super excited about this pickup, and I still kind of am, but man, just look at it! It looks absolutely destroyed! Fortunately, of all things, the auto wasn't damaged much, but its surroundings were for sure.
So going into sending this to Taillon, I didn't know a whole lot about him, except for the fact he apparently is going to be a pretty darn good pitcher according to scouts. The Pittsburgh Pirates took him as the second pick in the draft, and is currently pitching in their minor league system. The Pirates, who somehow are now in first in the NL Central, have a nice future ahead with a very young team and this 6'7 pitcher with a 99 mph fastball in the minors waiting to make his way up. He's going to be exciting to watch, and I'm glad I reached out to him for an autograph before even more people decide to.
I can't seem to win with these customs, but I think I've got a plan for the next couple, trying to keep them from getting absolutely wrecked. We'll see when I finally get around to trying it.
See Ya!
Posted by Drew at 12:53 PM