You heard it right, I'm not collecting Brian Bruney any more. I only ended up with like 5 cards of him or something, 3 total autographs if you include the 8 x 10 when I met him. So, I had a choice to make, out of these guys:

Jorge Posada: Maybe, but hard to find his autographs in cards, plus they sell too much $
Jose Molina: No
Fransisco Cervelli: Really like this guy, he'd be up there on my list but I want someone already solid!
Mark Teixeira: Can barely spell his name right, no thanks, but I do like him too.
Robinson Cano: He could be the one, solid already, hitting in the .300s with 20+ homers
Derek Jeter: Still collecting the hit king, just in base cards though, can't afford the big stuff.
Alex Rodriguez: No, collect base cards for him as well
Ramiro Pena: Have his auto, don't really want to collect him.
Jerry Hairston Jr.: No
Johnny Damon: Like him, but not enough to collect him
Brett Gardner: So fast, but no
Melky Cabrera: Like him too, but Cano more
Nick Swisher: One of my Yankees favorites, could collect him as well
Shelley Duncan: No
Hideki Matsui: No, never really a fan but still like to have his cards

Alfredo Aceves: Good pitcher, but does he have an auto this year?
Jonathan Albaladejo: Nah, I'll pass on middle relievers this time
Brian Bruney: Like him, but he's doing terrible so I really don't want to collect him.
A.J. Burnett: Nah
Joba Chamberlain: Too expensive to collect, but I do want his auto
Phil Coke: Again, enough with middle relievers
Michael Dunn: Never heard of him
Chad Gaudin: Nah
Phil Hughes: Like him, but again too expensive to collect
Damaso Marte: Nah
Mark Melancon: Need the Topps Chrome autograph if anyone has it, but I'm not a collector
Sergio Mitre: Nah
Andy Pettitte: Not too bad to collect, really like him, but I don't want to collect him I guess.
Edwar Ramirez: Nah
Mariano Rivera: Too expensive
David Robertson: He's injured now, does he have a card?
CC Sabathia: Nah
Josh Towers: Never heard of him

Or one of the up and comers:
Austin Jackson: Nah
Jesus Montero: Want his autograph, possibly
Ian Kennedy: NO!!!!!!!!
Anthony Claggett: Nah
Kei Igawa
And More!

So it comes down to Cano, Jeter, A-Rod, Cervelli, Montero, and Swisher. Lets take the 2 catchers Cervelli, and Montero out. I'll mention I collect base cards of A-Rod and Jeter, so now I mainly collect: 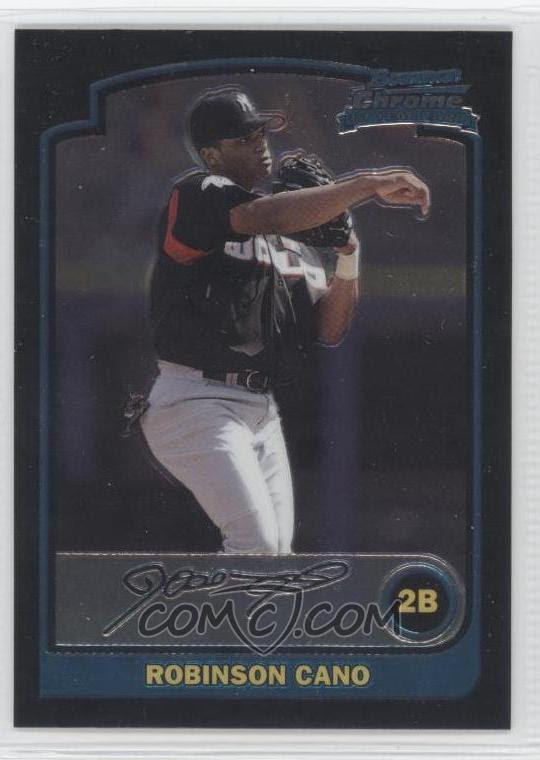 Please, will post up what I have soon, let me know if you have any good stuff of these guys. Thanks, Drew, and See Ya!