Hey everyone, Drew back here after a nice long vacation in Cape May, NJ. Over the trip I had no Wii-Fii so I had no clue what went on in card land, but I think I'm somewhat caught up. I did in fact have a TV though, and ears that work for the most part (minus the selective hearing with mom haha), so I heard the sad news of the passing of not one, but 2 Yankees Legends. BOB SHEPPARD
1910-2010
On Sunday, July 11th, Yankees long time public address announcer, passed away at the age of 99 in Baldwin, NY. Sheppard had "The Voice of God", as Reggie Jackson would say, and as Red Sox HOF'er Carl Yastrzemski once said "You're not in the big leagues until Bob Sheppard announces your name". He began his career in baseball in 1951, when DiMaggio and Mantle shared the outfield, along with Yogi Berra behind the plate and Phil Rizzuto at shortstop. From that point on, until 2006, Sheppard announced the Yankees and visiting opponents every game. R.I.P. Bob Sheppard, you can finally take your throne in heaven so you really can be the voice of god.

"Winning is the Most Important Thing in My Life, after breathing.
Breathing First, Winning Second" 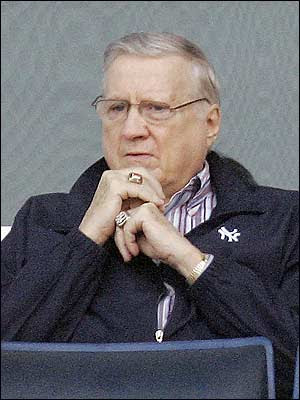 Just 2 days following the death of Bob Sheppard, another tragedy occurred in the Yankees family. On Tuesday, July 13th, George Steinbrenner, "The Boss", was found dead at his home in Tampa, Florida, due to a heart attack. Steinbrenner turned 80 on July 4th, and things seemed to be going well for him, until his unfortunate death. George bought the Yankees in 1973 and was the owner until he passed the franchise down to his sons, Hank and Hal, in 2006. He brought a winning attitude to the Bronx, where he spent fortunes on some of the highly touted free agents in baseball history: Catfish Hunter, Reggie Jackson, Dave Winfield, CC Sabathia, and Mark Teixeira. His tenure as the Yankees "Boss", won the team 7 World Series, and made the Yankee logo one of the most famous emblems worldwide. He also spent some money, and some time, setting up the Yankees Entertainment and Sports Network (YES), becoming the first team to have their own television channel, which debuted in March 2002. George gave a lot of money to local Tampa Bay charities, and was a lot more of a person then the average fan thought. R.I.P. George, we're gonna miss you.

I know most of you knew about all this already, but I wanted to pay my respects to the greats of the Yankees while I had an opportunity. I'll have more to come later, that I would've posted in this post, but I figured to let the post end with this.