Hey guys, Drew back here. I have 2 items that I bought off eBay to share with you guys, but first, I have a little news. As you may have heard, due to back tightness (???), Cano decided to drop out of the Home Run Derby. This is good news and bad news. Good is that his swing won't get screwed up, and bad because I wanted to see him participate and it looks like we're not going to.

Anyway, I did a little "Swish shopping", on eBay and found 2 cards from a seller that may have been a Swisher fan himself, having sold many autos and game used of Nick that night. I've never seen these cards before, so I knew I needed to jump on the bid button and get them. 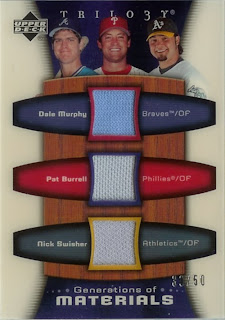 The first card was this from 2005 Upper Deck Trilogy, or Trilo3y, if you want to use the bad spelling by Upper Deck. The card features 3 relics, one of which is Pat Burrell (yawn), another of Dale Murphy, which has a cool baby blue swatch, and since I met him, it's cool to have, and then of course my home boy Swish. It's numbered 30 out of 50, and it's got a cool look to it too. 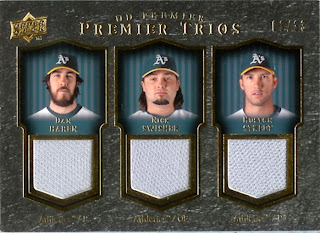 This second one is from 2008 Upper Deck Premier, aka, the product I could never possibly afford but is really nice nonetheless. This card is numbered 3/33, and it has 3 boring gray jersey swatches of 2 bearded dudes and some guy thats almost bald. The bearded guys are Dan Haren, now of the Arizona Diamondbacks, and the balding dude is Huston Street, an often injured closer for the Rockies. And Swish of course, who is now on the Yankees. It's funny how all 3 of these guys are gone within 2 years.