Hey guys, Drew back here, with some nice mail today, from Anthony of Mike Pelfrey Collectibles. But, before I get into it, first I wanna say R.I.P. Ralph Houk, who died yesterday at the age of 90. I wanted to get TTM but it was too late unfortunatelt. Houk was a great manager and he will be missed. I also wanted to say that I'm going to skip showing the videos sadly. I don't really have time to do a ton of work for just one post, so for now I can't really show them. I wish Blogger was better at uploading videos though, I mean, they were a minute long! Anyway, moving on to the mail.

Anthony was having an online yard sale of his entire collection, because he's grown bored of the hobby and wanted to move on and try something new, which in his case was War Memorabilia. So first, if you have any of that, go to his blog and let him know. His sales were great, and he negotiated with me really well and I feel like both sides made out well. I'm pretty sure he forgot one of the cards in the package, so I contacted him about it and he said he accidentally did forget about it and will ship it soon. So, here's what was in today's package! 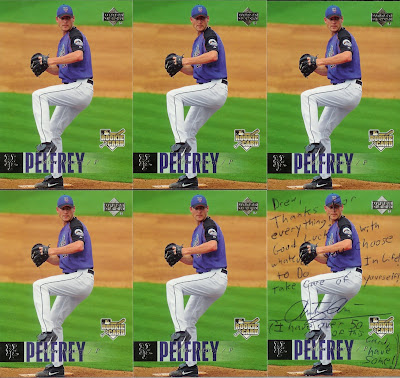 Yes, he did write on the bottom right card. He says he has like 50 of these cards, so he figured he'd send some my way. I do enjoy collecting cards of players that aren't on the Yankees, as you will see more of in this post. I like Mike Pelfrey, although he's struggled a bit, he's a good pitcher and I'm happy to own a few of his rookies. 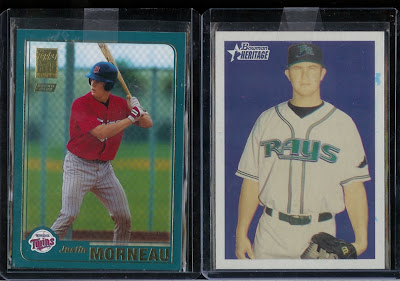 I got these from Anthony because they're two favorites of mine that don't play for the Yankees. Morneau was completely under shadowed by the Pujols and Ichiro phenomenon but has turned out to be a great MVP caliber player. Longoria was brought up on a local team that I occasionally go to games with, and in 8 games with that team, he hit 4 home runs. I also really like Evan's talent and it's a nice card to have. 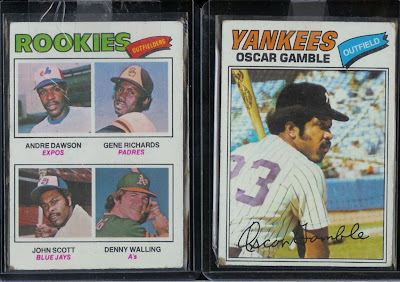 Now for vintage, I got an Oscar Gamble 1977 Topps since I didn't have it, and the Andre Dawson rookie card. I've wanted Dawson's rookie ever since he was elected to the Hall of Fame last year, and even though it's not mint condition, I really like the card. 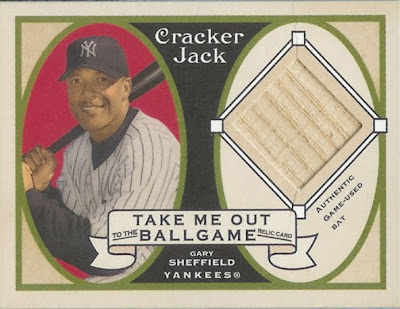 Here's the 1st of 2 Sheffield relics I got, a 2005 Cracker Jack "Take Me Out to the Ballgame" relic at that. It's really nice, smaller than a regular card but bigger than a 2007 Goudey card I'd say. Sheff as you may know used to be my favorite player, until he left NY on a bad note. I still like him and I'll try to add some of his better cards to my collection from time to time. 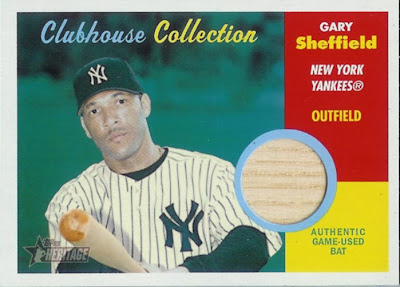 The second Sheffield is from 2006 Topps Heritage, another bat card. I must say I like the one above this more but this is nice too. 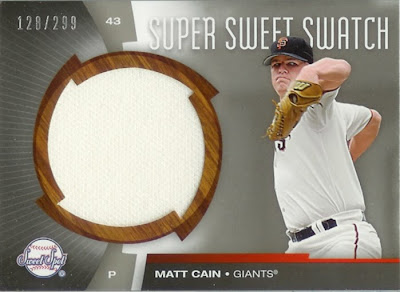 The final card here is a rookie jumbo jersey from 2006 Sweet Spot of Giants pitcher Matt Cain. Cain has been very good so far in his career, but is very unpopular due to Tim Lincecum being the star pitcher in San Francisco now. This may be the biggest relic on a jersey card I have, and I like the simple design. Plus, it's numbered out of 299.

All that plus one more nice relic for $15. Thanks for the great deal Anthony, go check out this link to see if you like anything, Anthony needs to get this stuff out of his collection! See Ya!
Posted by Drew at 3:32 PM