Yo whaddup everybody, drewscards here with a blaster box I did in September, in the beginning. I am re-posting my old articles for you guys to read, Thanks, Drew Here: 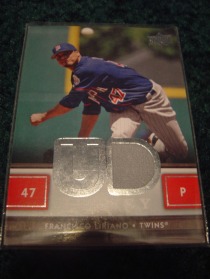 Hey everybody! This actually was a great box my grandma gave gave me on vacation in Lake Minerva, in Adirondacks NY, where we enjoy the beautiful mountain air every Labor Day weekend, and we enjoy time with my dad's family. So, in this box, there was one hit, 1 gold serial #'ed card (which I didn't notice in my video), 1 political cartoon card, a starquest card in every pack, and 1 Super Rare Starquest. I got a Francisco Liriano jersey card (no #), a Tony Gwynn Jr. Gold (Serial # 82-99). I got a Hilary vs. McCain Cubs-White Sox Rivalry Cartoon Card, a bunch of common starquests but a CC Sabathia rare, a Vladimir Guerrero and Ichiro un-common, and a Carlos Beltran Super Rare card. So overall, a very good box, although I could've gotten better of a jersey card. Today, my Pop Pop gave me about 10 vintage cards. The best 3 today were a Buddy Bell 1979 base card, a Jim "Catfish" Hunter base card (1979 as well), and a triple rookie/prospect card with Dale Berra on it. Dale is actually Yogi's son so it's pretty cool. Alright, See Ya!