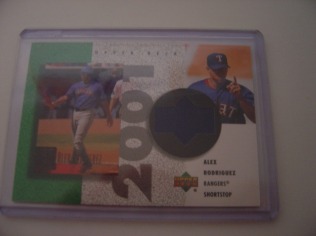 Yo, whats up everybody, drewscards here to wish all a Merry Christmas. I got some awesome stuff, especially cards and a new camera. So this 1st blog is based on the blaster boxes I got. I got a Upper Deck Update Edition or whatever it's called blaster, a combined UD Series 1 and 2 fat pack blaster, 2008 Donruss Gridiron Gear blaster, and a Goudey blaster. In the update edition box, I got a Yankee Stadium Legacy of Hideki Matsui, and some base and starquest inserts. I got 5 Legacy cards in the jumbo combined Upper Deck box, A-Rod, Hideki Matsui, Joe McCarthy, Red Rolfe, and Randy Johnson. They also had these nice Infield Power Inserts which were 2 per pack, and I got a nice A-Rod one. Those cards are basically all studs like the Starquests, but they're nicer. In the Gridiron Gear blaster, I got a #ed rookie (#ed/999) of Jermichael Finley, TE for the Pack. I also got a nice Rivals insert of Randy Moss/Terrell Owens (not numbered). Finally, in the Goudey blaster, I got a nice A-Rod mini, a LeBron James insert, a Larry Bird Hit Parade of Champions card, a Jake Peavy Black and White Insert, and legacy cards of Derek Jeter and Tino Martinez. Lastly, before start the next blog, my parents got me a lot of jersey/bat cards, and a Joba rookie, and one of the jerseys was guess who? A-Rod! It was when he was on the Rangers, which I'm not all that crazy about, but it's awesome still. The only numbered card in the lot was a Wilson Betemit bat card (#ed/1000). Than, they also got me a lot of like 5000 cards from the 1980s and 1990s, including Griffey, Bonds, etc rookie cards. By the way, the card collection number on the bottom is not going to appear for a little while because I still need to find out how many I have (approx.). I'm predicting between 18 and 19 grand, but thats my prediction. See Ya!