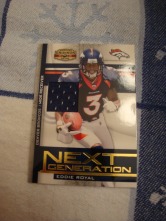 The 1st hit I got was the worst, but a nice card. It's numbered out of 250 and is a Next Generation jersey card of Eddie Royal, rookie wide receiver for the Broncos as you may know. Royal had a very good rookie year very quietly, and him and Jay Cutler make a pretty good duo. 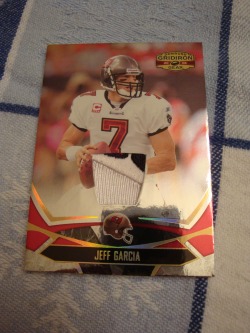 Next was a very sick patch of Jeff Garcia. It is numbered 19/40 and I would consider it a 3 color patch, plus jersey. There is a very little piece of red in one of the corners, probably not noticed on the picture, but heck, this new camera is great and it could show it. Jeff has had a couple declining years, but has had a great career, yet I don't think he'll make the Hall Of Fame. 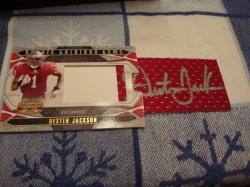 Finally, the last hit in this amazing box was the case hit. It is a Buccaneer player, and is numbered out of 100. It is one of those slideout rookie auto-jerseys of Dexter Jackson. I don't know much about Jackson, but he was a 1st round pick, but it is an amazing card. See Ya!