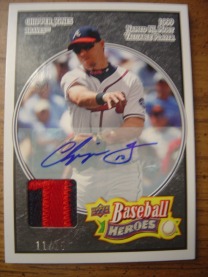 Yo, whaddup guys, drewscards here with another recap of two packs I busted at Dragons Den, my local hobby shop, which now sells good cards! One was of the new Upper Deck Documentary, and I can see why nobody has done a video of it on Youtube. DON'T BUY IT! I got a none other than Kosuke Fukudome RC, and than a pretty nice insert of Ryan Ludwick, with a nice silver All Star Game logo on it.Next I got a pack of Upper Deck Baseball Heroes. I saw a very thick card in there, and before I got excited, what most people hate, thinkingif it's a dummy card or not. Then I thought that there are no dummy cards in Heroes, peeked at the card and it was a hit. The hit was a Chipper Jones #ed/15 Patch Autograph, which are really rare in this Product, as rare as Presidential Cut Signatures and Yankee Stadium Buyback Cards, which sounds like it's up there. I tried later to find out what it books for, couldn't find the real price, but I saw one guy selling a patch auto of Eric Chavez on the A's for $100. I assume the Chipper is worth more, and I am still shocked that I pulled an extremely rare card in 1 pack I bought of it. I was amazed when I got it, and makes a nice part of my collection. Earlier that day, Mike and I talked trades on the phone, considering trading for his Orlando Pace GU from Topps this year for one of my three Chipper Jones jersey cards. When I got this the trade was guarrentead. See Ya !
Posted by Drew at 6:24 PM