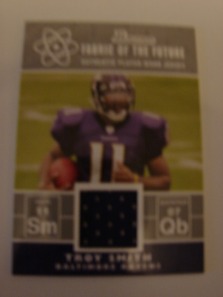 Whats up, my friend Mike and I split a box of 2007 Bowman Jumbo Football, and we had an okay box for the final one of my 1st Quarter Spectacular. Not the way I wanted to finish, but anyway. On average, you get 2 rookie autos, and 1 relic per box. Lets test this "Home of the Rookie Card" out. When I opened the box, a present was staring into my eyes in a plastic case. A Kolby Smith Rookie Auto. I've heard of him, so I guess it's okay. We later pulled a Troy Smith jersey card, which was the hit of the box, and here are some other notable cards we got.
- Adrian Peterson, Calvin Johnson, Jamarcus Russell, Brady Quinn, Marshawn Lynch RCs
- Dwayne Jarrett Blue Parallel RC (#ed/500)
- Jarrett Hicks Blue Parallel RC (#ed/500)
- Jarvis Moss Chrome Refractor Parallel RC (#ed/500)
- Dominic Rhodes Orange Parallel (#ed/250)
Something weird about this...well we had a stalker. Mike pulled a chrome card of Justise Hairston, and one of his packs, and we made fun of his name. That came back to haunt us. We later got a base RC of him, and when we found our final autograph, guess who??? JUSTISE HAIRSTON!!! We were cracking up on video, but mad about stupid Bowman at the same time. Are You Kidding Me? Justise Hairston Auto!!! I ended up getting the 2 autos, and he took home the Troy Smith Relic, and we split the rest up pretty evenly. Mike is a Giants fan, and I'm a Jets fan, so it worked out that way. We actually got a couple Giants and Jets gold parallels (not #ed). He got Kevin Boss and Ahmad Bradshaw, and I got Kyle Steffes. Sucky player, nice card. Anyway, See Ya!!!
PS Next break will be at Christmas most likely!!!