Here is a box break of Upper Deck Piece of History from my 1st Quarter Spectacular: 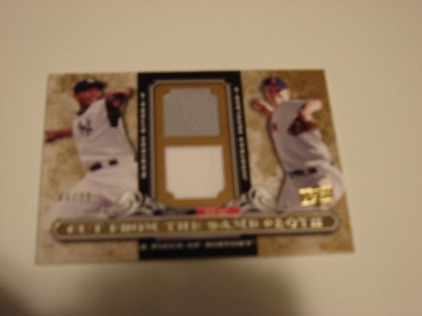 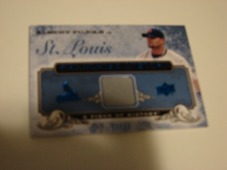 Whats up everybody, it's drewscards, and I just busted my 1st hobby box. It was a 2008 Upper Deck Piece of History Box. It (on average) contains 2 baseball player relics, a rookie autograph, and a Hollywood Memorabilia card. On the video I made for it on my pictures my dad joined me in opening the box. We started off on fire, getting a hit in the 1st pack. Unbelievable! I'm only saying this because of what it was. An Albert Pujols 11/25 Blue Parallel Jersey Card. We had in our next few packs, many many hits. So we saved them for later. But after we already had our guaranteed 4 hits, I pulled another one, and it's a beauty. Mariano "Enter Sandman" Rivera and Jonathan "My Team Sucks" Papelbon Dual Cut from the Same Cloth #ed/99 Jersey Card. So, after that amazing start, we had a little boring string of absolutely nothing, but some low #ed inserts, like:
Dice K- Curt Schilling Cut form the Same Cloth #ed/799
Ken Griffey Jr- Frank Thomas Silver Cut from the Same Cloth #ed/150
Vernon Wells 2/25 Blue Parallel
Brandon Jones RC Gold Parallel #ed/75
Manny Ramirez Gold Box Score Memory #ed/99 and many more
I also got 3 Yankee Stadium Legacy cards, although I was shortened of one, I still got a hot box and I can live with that most definitely. The legacies were of Don Baylor, Bucky Dent, and Reggie Jackson. So, for the rest of the hits, I got a Piece of Hollywood Memorabilia of and Undershirt from the 2007 film "The Nanny Diaries", worn by Scarlett Johansen, a Jose Morales Rookie Auto #ed to 50, and a Frank Thomas not #ed GU. So overall an amazing box of hobby wax. In the future, I'm gonna bust 07 Sweet Spot Baseball, and then after that, my friend Mike and I will split an 07 Bowman Jumbo HTA Football Hobby Box. See Ya!