Hey guys, Drew back here! My first official year as a college student is now complete, and I have to say there isn't a better feeling in the world than to be done. A lot has taken place in my life in that time, and I'm really fortunate for the way everything ended up. I definitely made the right decision by switching schools mid-way through the year, as being away (especially where I was) really brought me down in a number of ways. But, the past is the past, and every experience led up to where I am right now, and I'm very lucky to be where I am.

With all that said, here was my gift to myself for completing the school year; something I snatched up on eBay last week for a better price than what the remaining 24 copies were selling for. 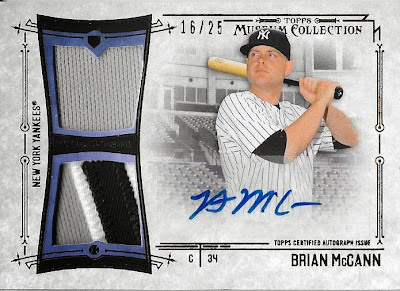 Out of this year's stunning Topps Museum Collection product, I purchased my first autograph of the Yankees new gritty backstop, Brian McCann! McCann hasn't delivered as well as a lot of Yankee fans had hoped in his one plus year in the Bronx, but I feel like he deserves a lot more credit than he's been given. Being able to have a dependable catcher in this day of age who can also come up with clutch hits is really an asset only a select few teams can say they have. The Yankees pitching staff has come a long way, surpassing expectations thus far in the 2015 season, and I feel like some of that can be attributed to McCann's veteran leadership. He may not be the threat he was during his prime, but I would gladly take him over any of the options they threw out there after Posada left.

McCann didn't have many autographs in a Yankee uniform last year, but this year he's been featured in several products. This one is on a sticker, but it is pretty hard to tell unless you see it in person. It is rare to find quality Yankees patches in any product, so to be able to find one of one of the team's leaders, autographed and numbered to only 25 copies for under $30; I couldn't be happier.

He may not be our best player, but I have grown quite fond of Brian McCann as a person and leader. That is something many Yankee fans seem to overlook since we've had the pleasure of having the best team leader possible for the past twenty years. This year, other players have had to step up, such as CC Sabathia, McCann, and Brett Gardner; and I think they've clearly done a great job considering the Bombers have been in 1st place of the crowded AL East for a majority of the season! And if you haven't seen his Oscar nominated performance as Ham Porter of "The Sandlot" (totally kidding about the Oscar thing), you should definitely go do that.

Happy Sunday everyone! See Ya!
Posted by Drew at 11:01 AM