Hey everyone, Drew back here! Over the past few months, I've been occasionally selling a card or three on my Check Out My Collectibles store. I've been using the site for several years now for buying and selling, and have recently put all the money I earned in sales towards cards I preferred for my personal collection. Lately, the money has been going towards autographs of rising stars in baseball that I enjoy watching, and I was able to add four to my Autograph PC in the process. 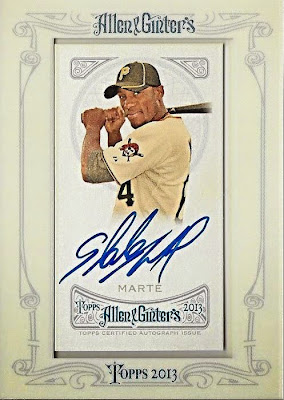 First up, I picked up a 2013 Allen & Ginter framed autograph of Pirates young 5 tool outfielder Starling Marte. Marte swings a streaky bat, but when he's on, there aren't many more dangerous hitters. At 26, he's only entering his prime, and he's already built up two very solid statistical campaigns and is on pace for his best yet in 2015. I originally drafted him in my 8 team friends fantasy baseball league, but traded him along with Pedro Alvarez for Gerrit Cole and Jayson Werth. Werth has since hit the DL, but I've been pleased with what Cole has given me. I've always liked Marte's sharp signature, and had been looking forward to getting my own copy. 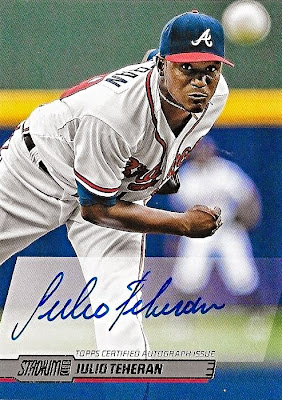 The remaining three pickups are all of current pitchers, two of the three currently struggling thus far in 2015. First, I was able to complement ranking Julio Teheran as having the second best signature in baseball today by purchasing a certified autograph out of 2014 Topps Stadium Club. Teheran had a breakout season in 2014, going 14-13 with a 2.89 ERA and 186 strikeouts, however this season has been a different ballgame for the Columbian hurler. He has a 4.33 ERA through his first eight starts, and has produced inconsistent results. Despite this, I knew it was a good time to look into his autograph, and sure enough for just over $5, it was mine. 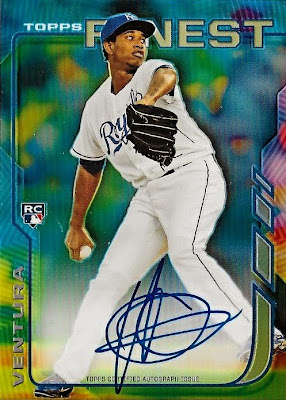 Perhaps the most controversial star in baseball (outside of A-Rod) in 2015 has been the Royals' Vordano Ventura. Clearly, the sky is the limit for this kid potential wise, as fans have seen in his spectacular 2014 playoff performances. The problem has been his attitude, which may have possibly affected his delivery on the field. After placing 6th in Rookie of the Year voting, he has come out the gate rather ineffectively in 2015. His ERA currently sits at a whopping 4.56, and advanced metrics don't appear to be cutting him much slack at all. This 2014 Topps Finest rookie autograph was too nice for me to pass up, but I know there is much more to be discovered about this kid before we can judge if he's an annoying, Delmon Young-esque fluke, or something much more memorable. 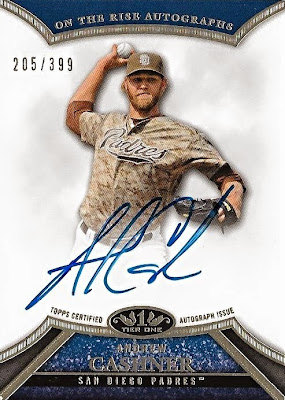 My final autograph pickup was of Padres's young righty Andrew Cashner. Cashner was on my fantasy team last year, and I took a liking to him after he dominated in the early goings. Unfortunately, he only made 19 starts over the course of the season, and I may have put too much trust in him. How could I not though; when he pitched to a 2.55 ERA with 93 strikeouts when he was on the hill? This year, I shied away from him in my drafts, but despite a currently league leading 7 losses he only has a 3.24 ERA. It hasn't been an overly successful season for the 28 year old, but I can easily see his potential being all too high to keep things that way. This 2013 Tier One autograph only cost me a little over $3.00 in store credit, so it was worth every penny. On a side note, the new Tier One product looks amazing in all of the pictures I've seen so far.

What do you all think of these players, as well as the current state of youth in baseball today? Also, before I go I wanted to apologize for missing this week's Ten for Tuesday, especially considering that the king of Top Ten's is having his final show tonight. The series will be resumed around the same time next week.