Thanks, but no thanks, Topps.

Hey everyone, Drew back here today, with a post that has been delayed longer than any other post in the history of this website! On July 15th, 2012, my Dad, friends Schuyler, Connor, and I all met up at a local card show at the Mid Hudson Civic Center. At that show, we not only met Whitey Ford, but we also won a door prize and I came home with a Tino Martinez signed baseball. Plus, my Dad got me a beautiful Mariano Rivera signed 16x20 for my collection. Boy, those were the days. Also, that was the same day I bought and activated two redemption cards from my 2011 Topps Tier One set; the relics they were supposed to make of Rickey Henderson and Ryne Sandberg. These have been the last two cards I have needed to complete my set ever since that day.

And well, they're clearly not making them. Topps is far past their 2011 Tier One set, instead focusing on this year's product, leaving behind all of the now expired redemption holders in the cold. It really is a shame, as I was particularly excited to have the Henderson card, but sure enough Topps found a way to disappoint. After waiting over a year and a half for the cards with no response, I emailed Topps Customer Service and spoke to someone who said my cards would be replaced and handled within 6-8 weeks. Two months later, I was still left in the cold (keep in mind about $40 was spent on the two cards), but I continued to keep my faith in the company, hoping they would eventually pull through.

Another year passed, until I finally decided to give it another shot; this time with a little bit more of a temper. I normally don't like to raise my temper, but this was something I grew livid about as two and a half years of my life went by. And you may ask, why didn't I just throw in the towel and give up? The simple answer is because I don't like giving up when I know there is something I have purchased or earned. More promises were made by Customer Service, and this time they actually delivered. I was hoping they would provide me with cards that would fulfill my PC's, especially considering how fed up I was over this situation. I let them know who I collect, and they said they couldn't make any promises as to what I would receive. For once, they actually prepared me for a letdown. 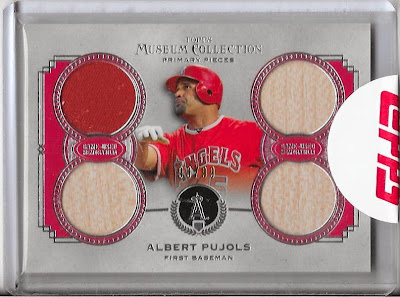 Albert Pujols is a tremendous player, and easily one of the best players I've had the privilege of watching in my lifetime. This 2013 Museum Collection card is beautiful, featuring four pieces of material; 3 bat relics and 1 red jersey relic. It is numbered 98 of 99, adding to the overall value of the card, which I presume was meant to match the Henderson card. But this is not what I purchased; if I wanted to spend $25 on an Albert Pujols relic I would have went to eBay and done that myself. The best part about this, as well as the next card, is that I finally have some trade bait. Again, I do appreciate all that Albert Pujols has done for the game, but I would've taken a Joe Panik autograph instead of these two cards any day. 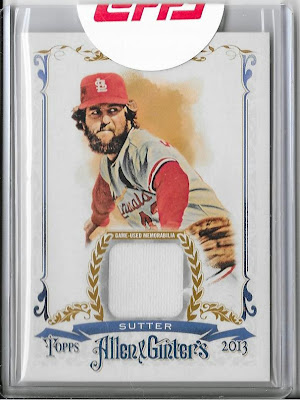 The only saving grace of this 2013 Allen & Ginter Bruce Sutter relic is thanks to Sutter's beautiful facial hair. Otherwise, it's a very dull card, to be honest. I just listed Sutter as one of my most undeserving Hall of Famers, and I really don't have any need for this in my collection. I understand his place in baseball history as one of the better relievers of his era, and I'm sure someone else reading would love to own this, and if that is the case I'd love to work something out.

All in all, I'm pretty frustrated still with Topps despite finally sending me something. I get that the two cards I was given equalled the Beckett value of the cards I was waiting on, but there was more to it than that. I stopped buying Topps cards for the most part of two years in a row because their Customer Service was so lackluster, and you would think the company would provide the care for their customers a little better than just throwing two cards I don't want or need at me. With this, I am now officially done with the 2011 Topps Tier One set; it ended on a bitter note, but at least I can say I have some nice cards from that set to drool over.