"No No: A Dockumentary" Review

Hey everyone, Drew back here. I've had some recent pickups to share recently, but I wanted to pause momentarily and share my thoughts on a documentary my Dad told me about last night. Last year, Jeff Radice directed and produced "No No: A Dockumentary" about the life and career of controversial 1970's star pitcher Dock Ellis as part of the annual Sundance Film Festival. Ellis has universally been known for pitching a no-hitter while under the influence of LSD, but his story goes far beyond one memorable game. 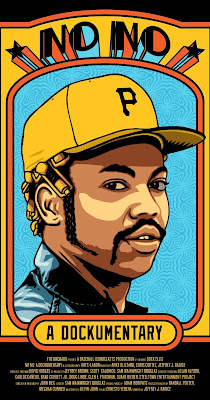 Ellis states in the documentary frequently that he was either drunk or high in just about every professional game he ever pitched, but despite this, he was still a formidable pitcher for a team that transcended the game of baseball, the 1971 Pittsburgh Pirates. At one point during that season, each position was filled by an African American or Latino player, and they became a tight knit group. Of course, this was based off of an era in which the majority of the young American population began experimenting and rebelling from the standards that were held from the times of the past, and this carried through to the Major League's. Dock was genuine and honest about all of the trials and tribulations that he faced as a young African American in baseball, and Radice does an excellent job of taking viewers on an emotional rollercoaster all throughout.

I know I had personally only known of him as a very good Pirates pitcher known for the famous no-hitter, who also had a brief stint with the Yankees towards the end of his prime. I did not know much else about the man, but can easily say this film was captivating from start to finish. It was cool getting to see an Al Oliver interview scattered within the hour and forty minutes, since I have met him on multiple occasions and have had nice experiences with the man overall.

The best part of the film comes at the end, when it is revealed that he redeemed himself. Ellis cleaned himself up after hitting rock bottom, and he spent the rest of his life trying to help people recover from their own drug addictions. He may have pushed the envelope during his career with fans and those involved with baseball, but by the time of his death in 2008 he appeared to have exorcised his own demons and owned up to the fate of his career.

I thoroughly enjoyed this documentary. It kept my interest from beginning to end, and I can say that I learned a lot not only about Ellis but the other players and era they were a part of. If you have two hours on your hands one day, go give it a look, it is currently on Netflix if you can't find it elsewhere for streaming.

Have any of you seen this before? Leave your thoughts down below!