Hey everyone, Drew back here! I was able to complete two of my finals today, leaving one for the semester on Wednesday morning before I'm off for the summer and finished with my first year of college! It's been a very windy road over the course of the past year, but overall I've learned an awful lot and grown up more than I could have ever expected. I'm loving my new school despite a relatively subpar schedule in my first semester, but I definitely changed it up so I won't have to suffer through 8 AM Public speaking courses any longer.

I had been on a 51 day TTM drought, after sending almost 30 requests out for Spring Training. So, what did I do? I ordered some cards off of Just Commons, and sent even more out. Sixteen requests went out to add to what I had already sent, and I already received two autographs back from two of the more successful managers in recent history, despite no World Series championships among the pair under the helm. 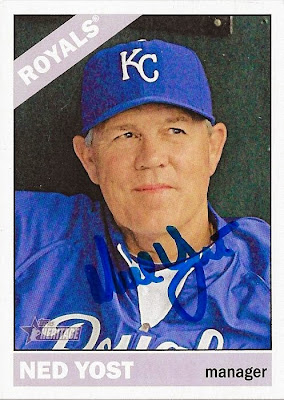 Yost, of the defending American League champion Kansas City Royals, was the first of the two successes! He has always been a questionable decision maker throughout his time as skipper for the Milwaukee Brewers and since he took the Royals job in 2010, but he paid a lot of dues with the Royals' fantastic, out of nowhere season. It was a lot of fun to watch them pave their way through the playoffs, and although some may deem them as a dirty ballclub, especially in 2015, they certainly have learned their own winning formula.

He signed a 2015 Topps Heritage card for me quickly and nicely in 10 days! 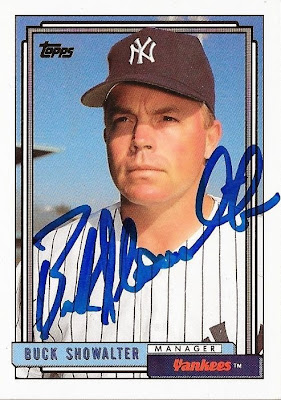 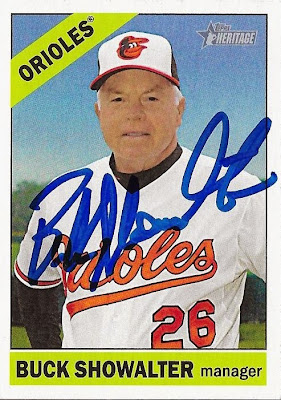 However, as good as Ned Yost has been, getting Buck Showalter back TTM meant much more to me. Showalter has been the manager of my buddy William's Orioles since 2010 as well, and has led them to a tremendous amount of success. While Joe Maddon is constantly hyped as a difference making manager, it is Showalter who has come away with three Manager of the Year Awards, each with different clubs. On top of it all, he was the Yankees manager between 1992 and 1995, and resigned because he was unwilling to fire his hitting coach, Rick Down. He, along with Gene Michael, had a lot to do with the personnel decisions the team made during that time, which may have involved some guys named Jeter, Rivera, Posada, and Pettitte, among others. Despite being a rival manager, most Yankee fans give him a lot of credit for their World Series dynasty teams in the late 1990's that he wasn't even a part of. After seeing the way he managed the Diamondbacks, Rangers, and now Orioles, fans can see how pivotal his presence is in turning a team in the right direction.

Buck signed a 1992 Topps as well as a 2015 Topps Heritage beautifully for my collection. I made sure to wish he and the Orioles the best of luck with the situation going on in Baltimore, and it is nice to see them playing at Camden Yards again tonight.

I don't normally get too excited about manager TTM returns, but these two were particular exceptions. I love to get player autographs over anything, but if I were to add any manager's autograph, it would be Buck's. I'm glad I have a few now!