Taste of Gypsy Queen + Why Matt Carpenter is the Worst 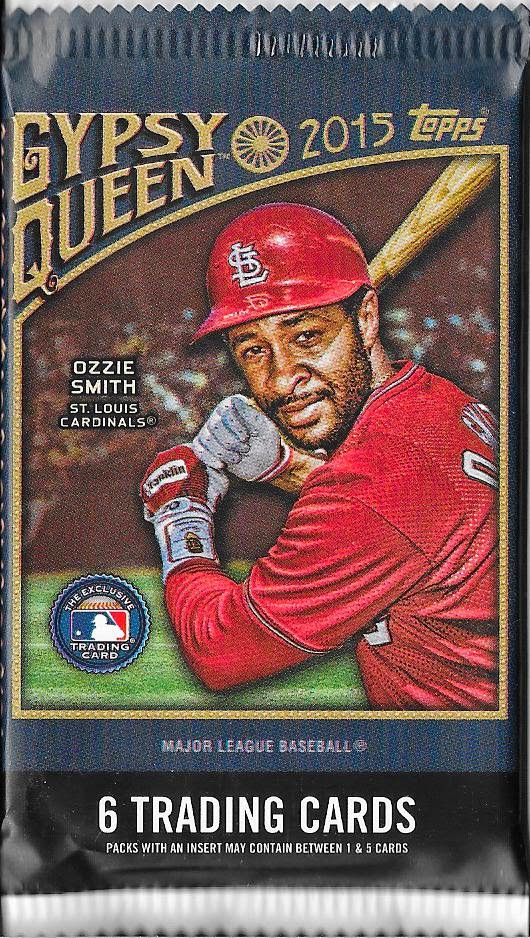 Hey guys, Drew back here! It may or may not be a good thing that my new job is located at my local mall, along with my closest Target. I've been tempted for over a week to check out the new Gypsy Queen product, and I finally got around to giving it a try; purchasing a hanger pack with 3 retail packs and a 3 card pack of Target exclusive parallels. I could not resist Ozzie Smith being on the pack covers, and I've always liked what Topps has done with the set year after year. 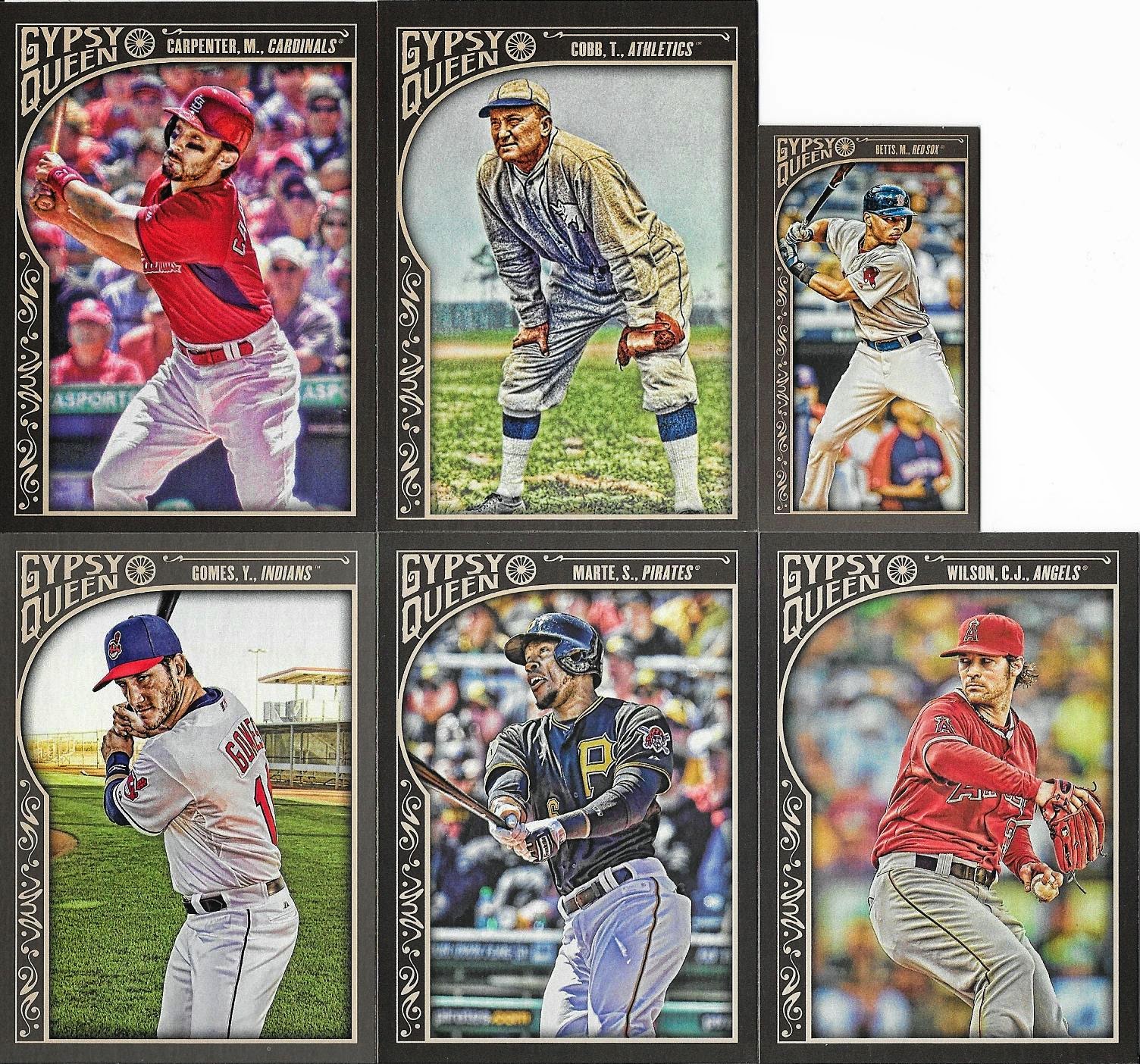 Matt Carpenter and I are foes all thanks to fantasy baseball. I really want to like the guy, he's a great run scoring leadoff hitter on a team I have always found respect for. However, in September of 2013 I was playing in my main fantasy baseball league championship against the kid comparable to Ruxin from "The League"; who had won two consecutive seasons and was seeking a three-peat. On the last day of the season, I was barely ahead, until the Cardinals played that Sunday night. My opponent played Matt Adams and Carpenter while I had Yadier Molina as my final player of the season. I was winning the batting average category by percentage points, and Molina's 1 for 3 performance that night put me up just enough where I thought I could hold on. I also was winning by 1 home run, and was worried that Matt Adams could be the guy to hit the tying bomb, since he is more of a power hitter and was on a tear at the moment.

Adams stunk it up on Sunday Night Baseball, striking out 3 times in an 0-5 performance. However, Matt Carpenter did just enough to crush my spirits. In his first at bat, he barely knocked the ball over the fence to tie the home run category at 12 each. At this point, I had the score at 5-3-2 (our league plays Head to Head based on categories), and after Molina's hit I thought I would still be able to hang on. But Carpenter wasn't done, and in one of his later at bats he knocked a base hit barely above a leaping Scooter Gennett at second base that gave him a batting average lead of .3121 to .3117, which he was able to hold on to to tie the overall score, 4-4-2. Yeah. A tie. In the championship. And since his team had a better overall regular season record than me, he won the tiebreaker, and the championship.

But that's not all. After having to hear him brag about Matt Carpenter winning him the cheapest championship in fantasy sports history, I decided to give him a shot the next season. If anyone else reading had Carpenter on their team last year expecting what he did in 2013, you can see why I still couldn't change my mind about him. This year, he's back on the dark side, and of course, he's performing whenever my arch rival wants him to. So, long story short, Matt Carpenter, you're the worst. 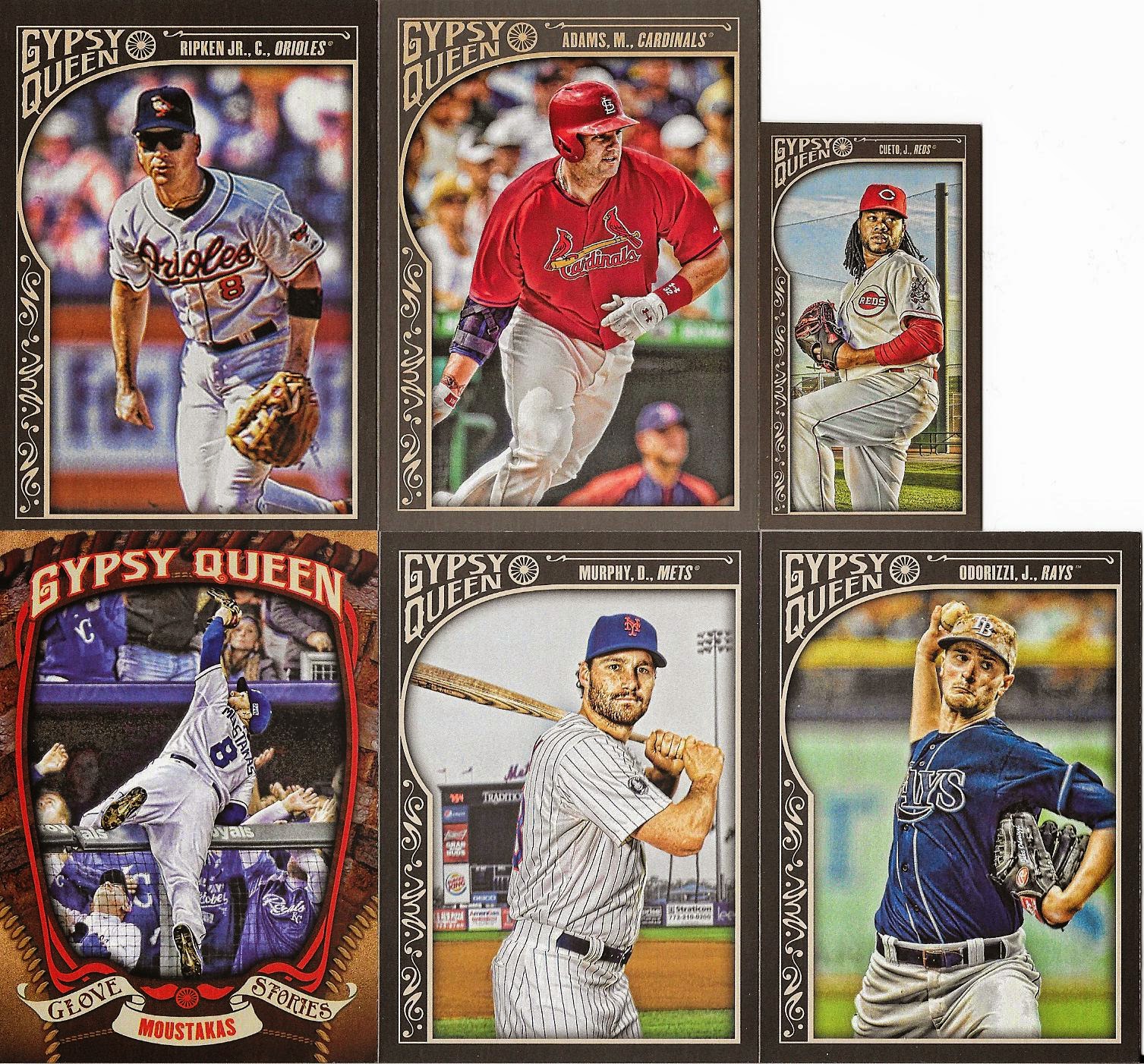 Sorry for the rant before, I just can't help but get frustrated whenever I see Matt Carpenter dominating. As for the Gypsy Queen set itself, I'm a fan of the base cards with the exception of that distracting loop on the upper left side of each card. It bothers me, especially when they don't make use of it to include more of the photo in it. The Carpenter and Marte cards in Pack 1 look better to me than what Topps did with Daniel Murphy and Cal Ripken's cards, because the space is unnecessary and takes away from the overall design. I think they wanted to make a substantial change this year because the product was beginning to lose its appeal, and I really have to be honest, I'm not sure if it worked well at all. 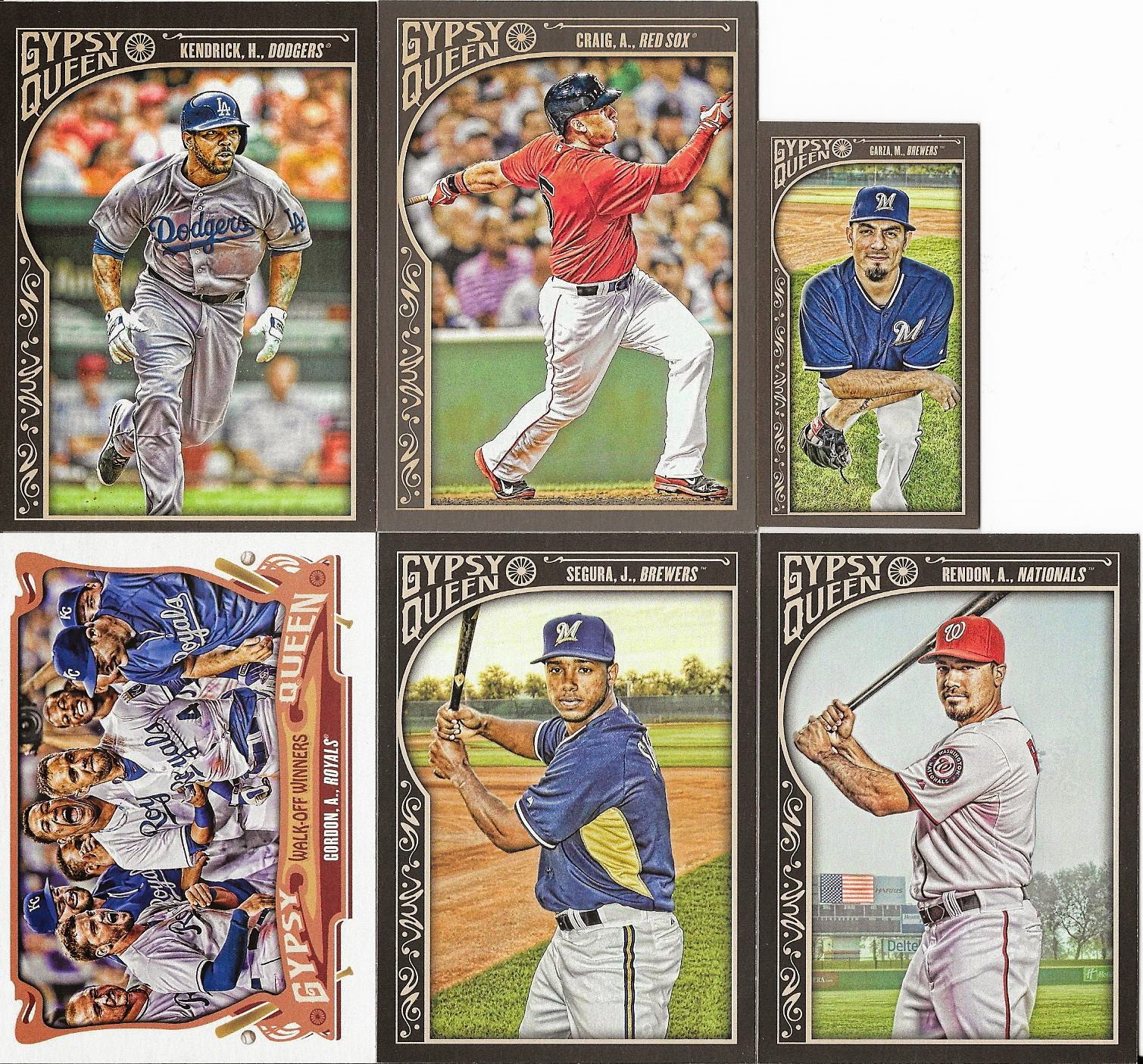 I'm also starting to get a bit sick of mini cards. I have never known what to do to store minis properly, and I've had stacks of different years of minis laying around in my basement for a while now. I always have to put them separately in card boxes because if I try to put a player's cards in order, the minis always seem to fall out and it becomes a process. If anyone wants a significant amount of my mini cards, feel free to comment on this post.

One thing I can say Topps does a good job with in Gypsy Queen is how they can photoshop players in new uniforms. Obviously, there is no perfect way to do this, but I think the Howie Kendrick card looks presentable without a doubt, and it was my favorite card of the pack. A lot of this has to do with the artistic approach to contrast and shadows that has been Gypsy Queen's draw for years now.

Call me hypocritical, but the weird loop in the design looks fantastic on these parallels. The pictures are set into the cards and these are on thick card stock, and I think the shining gray foil used displays the pictures really well. The Satchel Paige is a beautiful card, and the other two don't look that bad either.

Something did feel a bit off with Gypsy Queen this year, and I can say of the three products I've checked out in 2015, it has been my least favorite. I'm looking forward to Series 2 of the flagship set!

What do you think about this year's Gypsy Queen? And, do you have any players you can't like no matter how hard you try?