One Small Step for Man...

Hey guys, Drew back here! The snow has continued to ruin all of our lives up here in the northeast, and I'm starting to wonder if it'll never end. There isn't a doubt in my mind that if my job doesn't get in the way, I'll be heading further south one day. The James Shields express has finally stopped at Petco Park; as he's now set to join the Padres for a 4 year deal between $72-76 million. I've been critical of Shields for his age and innings thrown all offseason, but knew the only way he would be worthwhile was for being a veteran leader of a young pitching staff (like what he did in Kansas City). I wouldn't expect much in "big games" from James, but he'll play an important role in what should be an interesting NL West race this year.

Today I wanted to show off another TTM success I recently received, this one coming back from someone I remember watching the first year I ever followed baseball. He was nowhere near a star, but he became a story that people all around the league grew to embrace. 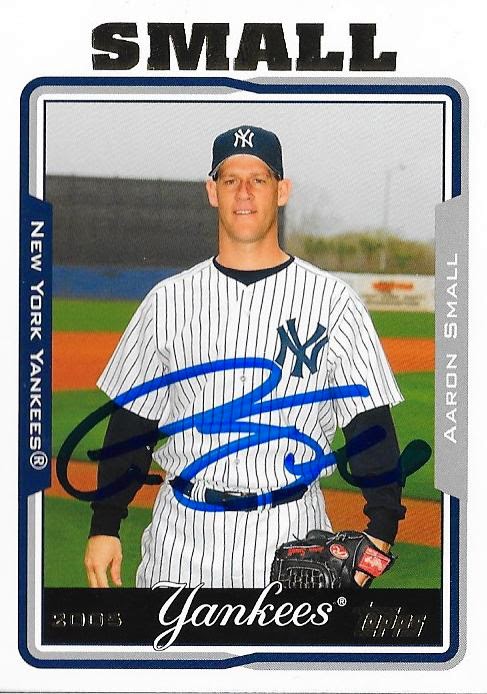 Aaron Small bounced around the minor leagues and major leagues his entire career, which began in 1989 when he was first signed. He played for six teams before he eventually had his time for the Yankees, and was called to fill into the rotation because of injuries. People were skeptical as to how he would perform, but he made those 11 starts count, going 10-0 with a 3.20 ERA. On September 3rd, 2005, he threw a complete game shutout as one of those 10 wins, and became a Yankee folk legend of sorts. He ended up retiring the next season with the Mariners after the Yankees designated him for assignment, but his story was one that any current journeyman players could admire.

He signed my 2005 Topps card and wrote "Drew, May God Truly Bless You, Proverbs 3:5-6" (Trust in the Lord with all your heart and lean not on your own understanding; in all your ways submit to him, and he will make your paths straight) on the outside of my letter! His Wikipedia states he is a devout Christian, and while I'm not particularly involved with religion at the moment, he seems like a great guy.

Thank you so much Mr. Small for the great autographs! Your story will not be forgotten!