Hey guys, Drew back here! Another summer is on the backburner, as my senior year is getting closer and closer to making its debut. It's been a summer filled with highs and lows, mainly highs for the most part though as you all have seen. Between the never ending Fanfest/Home Run Derby day, my trip with William to Cooperstown, and what you're about to see below, I think it's safe to say I've had a solid summer.

A few weeks ago, I spent my day with my Dad in White Plains, preparing to add 4 more names to my signed Mantle picture! Originally, my reason for going when I did was to meet "The Warrior", Paul O'Neill, but he had a scheduling conflict and had to cancel last minute. Instead, I met these 4, starting off with Charlie Hayes! 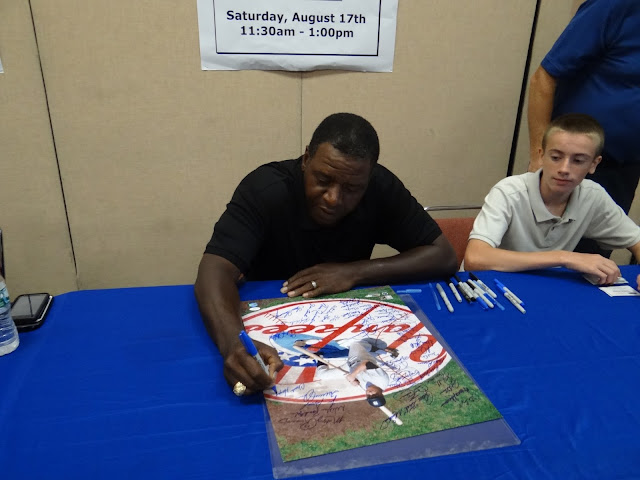 Charlie Hayes was a solid player throughout the 1990's, although he played for more teams than you could count on one hand throughout the decade. He was fortunate to be traded to New York in 1992, and while he had a solid season, it wasn't enough to keep him from being drafted by Colorado in the next year's expansion draft. He returned to the Yankees in 1996 just in time to make the final out of the World Series, the moment he's always been known for. I was born in 1996, so his play has been important to me in many ways. 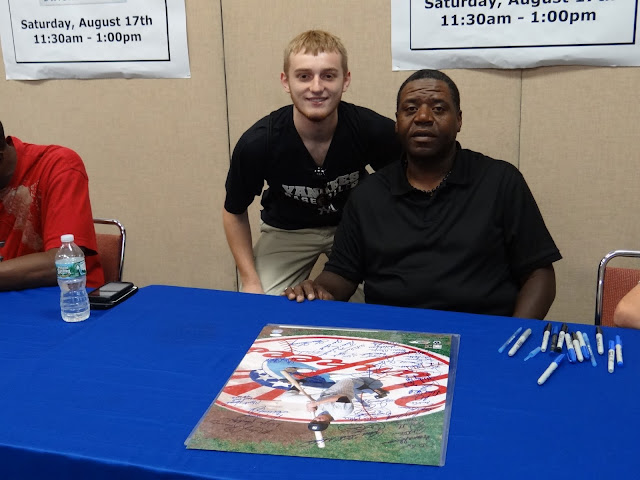 Charlie was a nice guy in person, although he didn't say a whole lot. He didn't draw the biggest of crowds, but a few big Yankee fans got the chance to shake his hand throughout the day. The only issue with Hayes was that he marked a fairly significant first on the Mantle photo. While Gene Michael originally added his nickname "Stick" on his autograph, and several players added their numbers; Hayes officially added the first legit inscription to the photo. He wrote his number along with "96 WS Final Out" below his autograph, which takes up enough room to take away one less autograph on it for future use. Don't get me wrong, I love that inscription, but on a piece without inscriptions... I cringed a little bit. Fortunately, since he signed off to the side, it won't stand out too much and I'll learn to live with it. 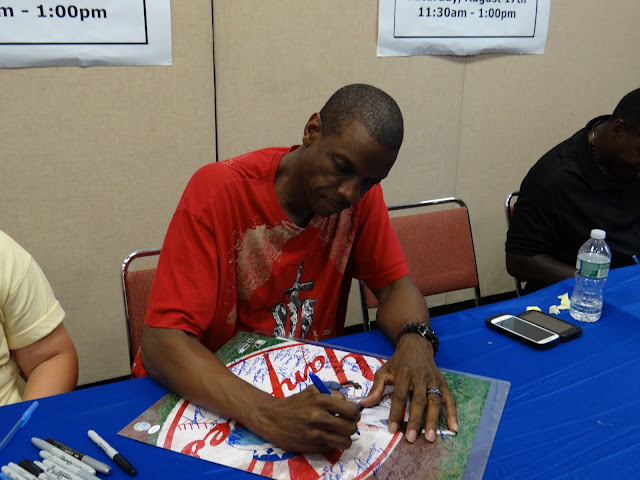 Dwight, otherwise known as "Doc" Gooden was the next on my To-Do list! Say what you want about Gooden's legal issues and substance abuse problems over the years, but he sure has gotten his act together lately. Both times I've met him he's been a really nice guy, and he looks really good given all he's put his body through over the years. I have a strange fascination with players (and people in general) that carry the "What If?" factor, and he undoubtedly has that. He was untouchable in his first few years with the Mets, only to ruin that for himself with drugs. I believe if he never hurt his body, he had the potential to be a Hall of Famer. 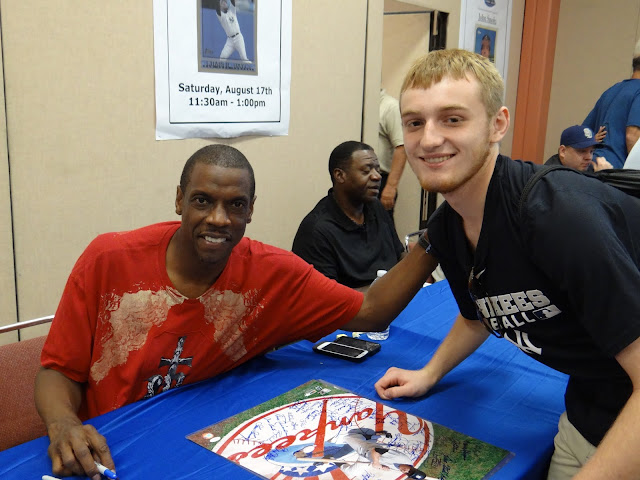 Like I said, Doc was an awesome guy, and he signed right next to Hayes on the picture. He looked down at my picture when I first gave it to him and he complimented it, saying I have a nice collection. There is something too awesome about the feeling you get when guys who've accomplished a lot in their lives give you a compliment, so that definitely meant a lot. 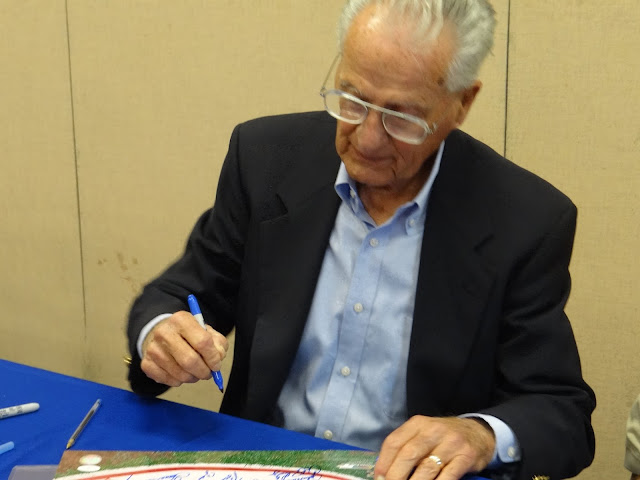 Jerry Coleman was probably the one I wanted to add to the picture more than anyone that day. Coleman played with Mantle for parts of 7 seasons, although his career was beginning to slow down at that point. Mantle was on the rise, but Coleman served a bench role for the most part. Coleman has accomplished an awful lot in life; not only was he an All Star and 4 time World Series champion, but he also served in the Korean War as a Lieutenant Colonel (the reason for his nickname, "The Colonel")! On top of that, following his career in baseball he worked as a broadcaster, eventually taking over the San Diego Padres radio announcer job. He was given the Ford C. Frick award in 2005 for his broadcasting efforts, becoming one of 5 players-turned-broadcasters to ever be given the honor. 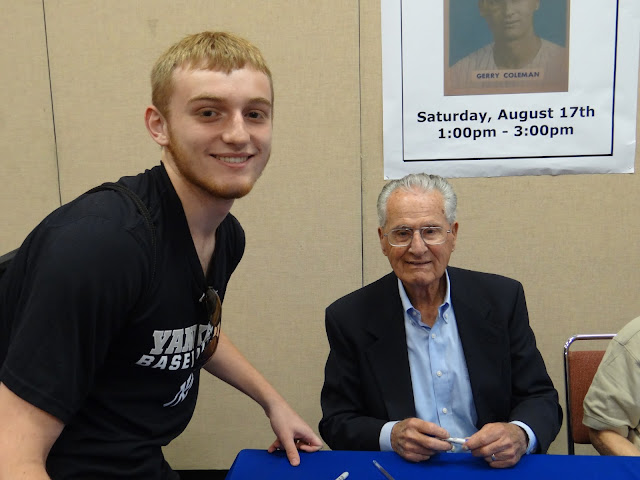 Before I get to the negative, let me say that I give Mr. Coleman all the props in the world for traveling to this signing. At 88 years old, I can only imagine how much of a drag that would have to be. However, JP's Sports had scheduled him to sign between 1:00 and 3:00, and I had my chance to meet him around 2:00. At that point he was yelling "I have a plane to catch at 2:30, I need to get out of here" and "these photos are the reason this is taking so long, so hurry it up". On top of that, when I politely asked him to sign in a specific location on the picture, he said "how about right here?" and signed elsewhere. He signed in the middle of an open space, leaving small gaps in all 4 locations that most likely can't fit an autograph. I was not impressed with Mr. Coleman one bit, and I thought he had quite the nerve to be as rude as he was. I understand that if you have a flight to catch in a half hour, you have a reason to be flustered, but why on Earth would your flight be leaving before your paid signing session was over. It was ridiculous, if you ask me. 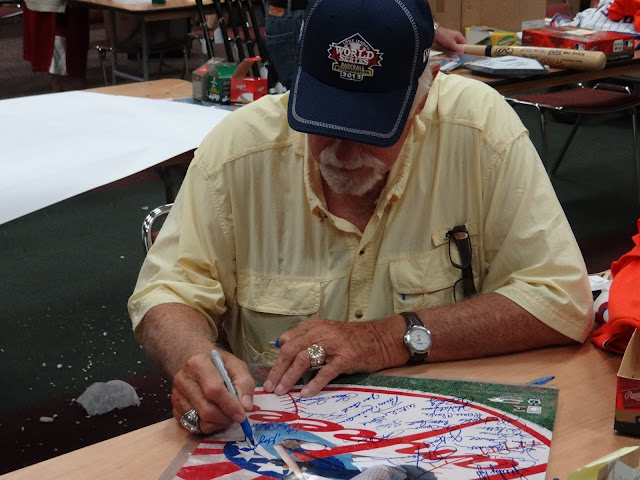 I got really lucky with this next one. Hall of Famer Gaylord Perry was the free signer of the day, but the crowd he drew was too large for me to even fathom getting him that day. Eventually his signing session ended, leaving me graphless, and since he played part of the 1980 season for the Yankees, I had wanted him on the picture. My dad talked to one of the guys running the show, and since we have been so loyal to them over the years they let me into the back room the players go to after their signings to get my 1 on 1 chance to meet Mr. Perry. My dad had already met him in Cooperstown and got his autograph on his All Star 8x10, but like I said, I had wanted him on my picture. He was traded to the Yankees in August of 1980, but the main reason they wanted him was to monitor his pitching style to see if he doctored baseballs like many accusations had said. He went 4-4 for New York with a 4.44 ERA, certainly not telling of his great career statistics. 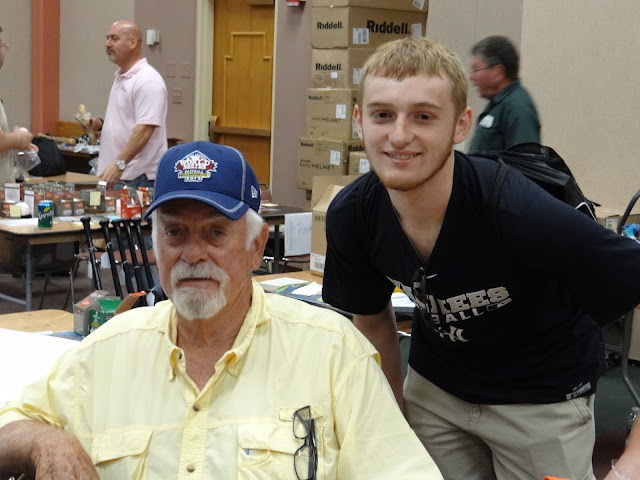 Perry was short, sweet, and to the point with me, and just like Coleman, he didn't sign the spot I asked him to sign. Instead, he signed sideways, taking up a ton of space on the picture. Look, I appreciate these players signing nice and big on my picture, but I have a lot of big names I still want to add to it before I close it off, and I may not be able to at this rate. I don't think I'm being rude by telling them to sign at a certain spot since I say it so nicely, but some just prefer to be ridiculous. 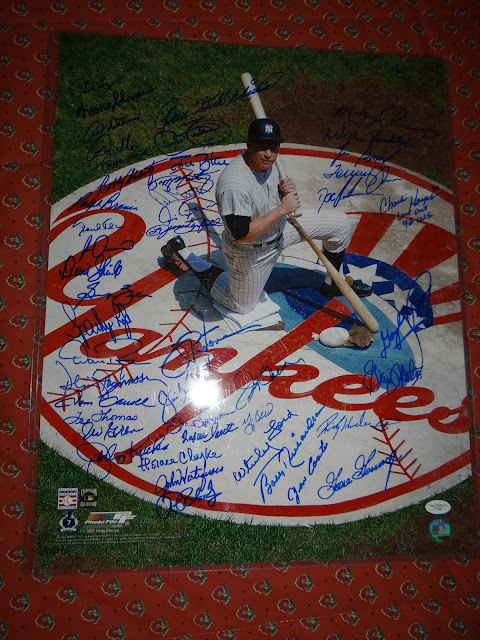 On that note, here's a look at the photo's current status. Gooden and Hayes signed by Mantle's left knee, and a little below them is Perry's huge autograph. Coleman signed close to Jim Kaat and right above Yogi Berra, right in the center of the photo. Quite the large ego for a Hall of Fame broadcaster if you ask me. This project is going to become more and more of a pain as it continues, but the goal is to make it look as good as possible, and I'm going to continue striving for just that. Thanks again to Doc for being the only player I added that day that didn't drive me nuts.