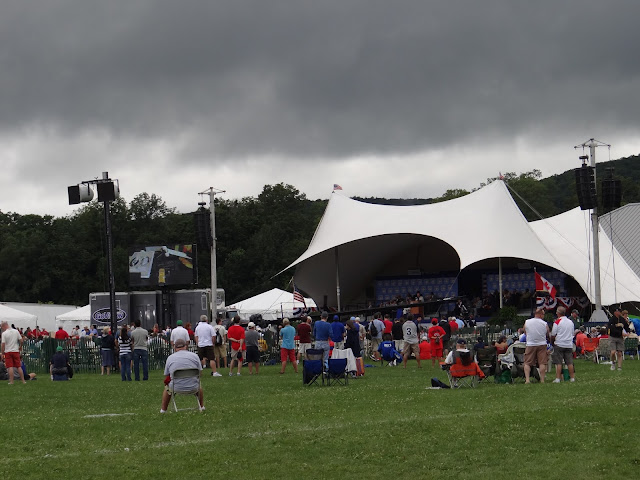 Hey guys, Drew back here. And yeah, we were in that. This year's Induction Ceremony was already planning on being a gloomy day for baseball, as three long dead inductees were being brought in by the Veterans Committee. It didn't help that the weather didn't even want to cooperate. There was a rain delay (fitting) for over an hour at the ceremony, and we were all forced to duck under various tents located around the area. We left our chairs and blanket out in the middle of it all, so by the time the rain stopped, we had no choice but to stand. Had we been standing a couple yards to our left, we could've been yelled at by a guy sitting nearby. At one point the guy became so frustrated with the man standing in front of him that he got up in the other guy's face, only to be pulled back by his son. What people do to see Deacon White get inducted into Cooperstown... 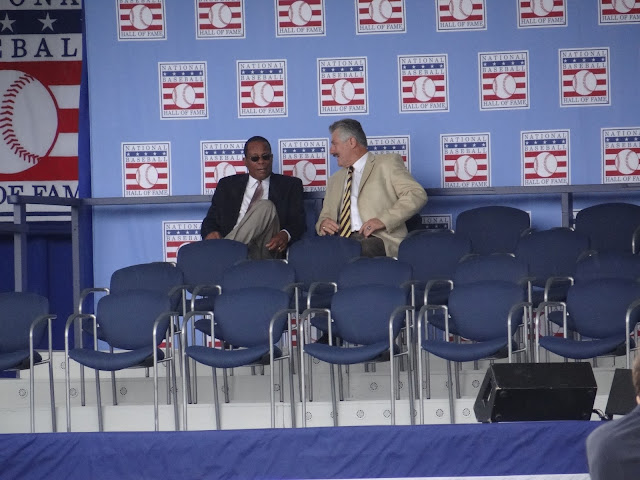 William and I, while appreciating the impact that Deacon White, Jacob Ruppert, and Hank O'Day made on the game we love today, came to see the returning members of the Hall of Fame. Not too many of them showed up, however it wasn't a complete wash in any way. Rollie Fingers and Rod Carew were two of the first players announced, both of whom are usually expected to be there. You can't have a Hall of Fame extravaganza without the handlebar moustache! 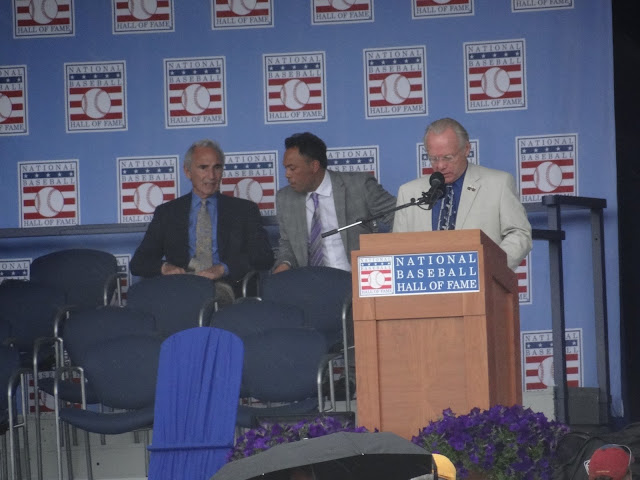 One of the marquee players of the pack was undoubtedly Sandy Koufax, the legendary lefty of the Dodgers! Sandy seems to love coming up for the induction every year, although he generally prefers to keep out of the public spotlight. It was great to see him though, and he really looked great for his age. 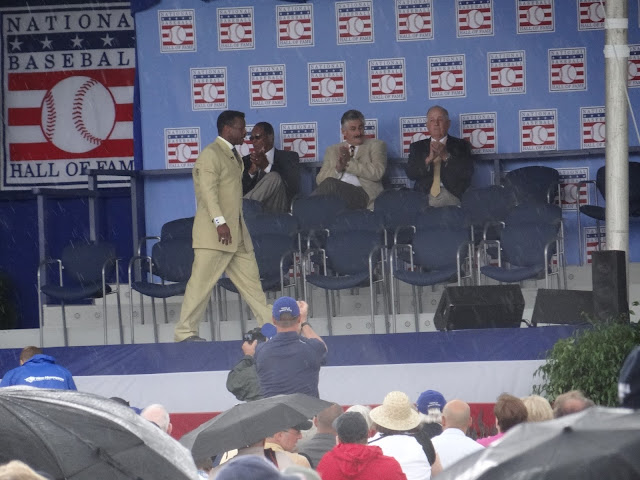 Rickey definitely won the "Best Dressed" award this year, as he seemed to find a way to look good wherever he ended up. You can also see in this picture how hard it was raining, and this was after the actual rain delay. 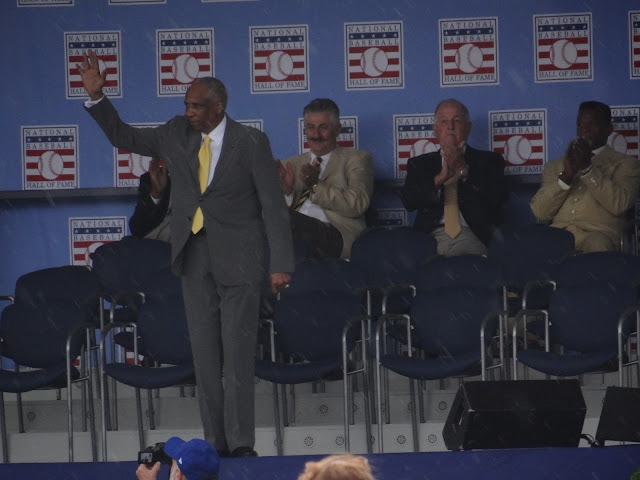 Frank Robinson also left his mark on the stage that day, and it was great to get to see him again. Hopefully one day I'll get a chance to meet him and add an autograph of his to my signed baseball collection! 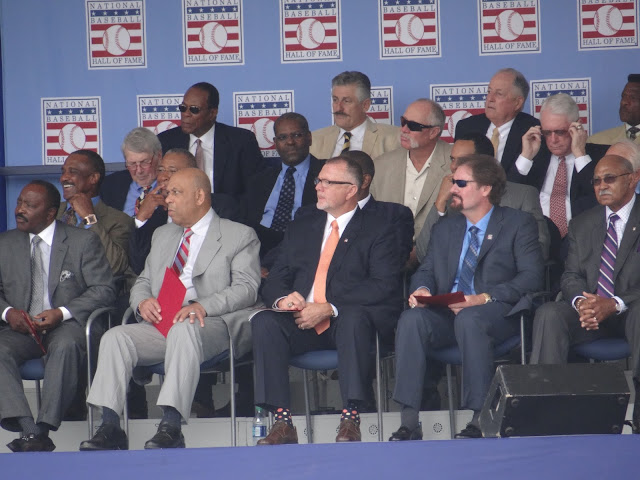 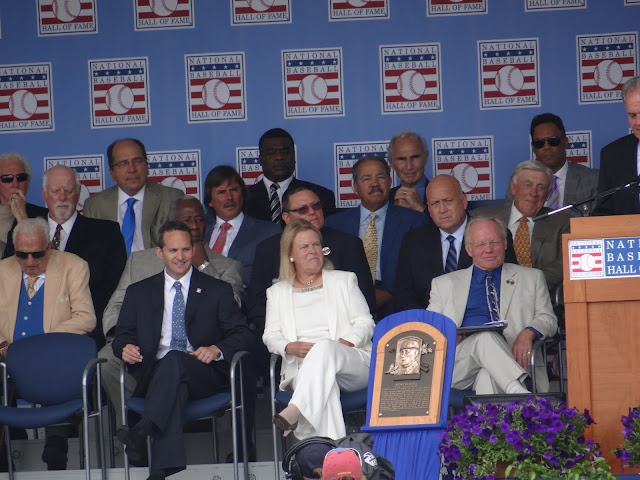 I put my camera away for a while until the weather cleared up because I didn't want to risk my mom's high end camera being wrecked. I snapped a few pictures later on of both sides of the stage, and every time I looked at the left side of the podium, Ralph Kiner seemed to look.. well.. asleep. I give the man tons of props for being there, so he could sleep all he wanted. After all, listening to relatives of obscure Hall of Famers can be a little taxing, as all of our group realized. 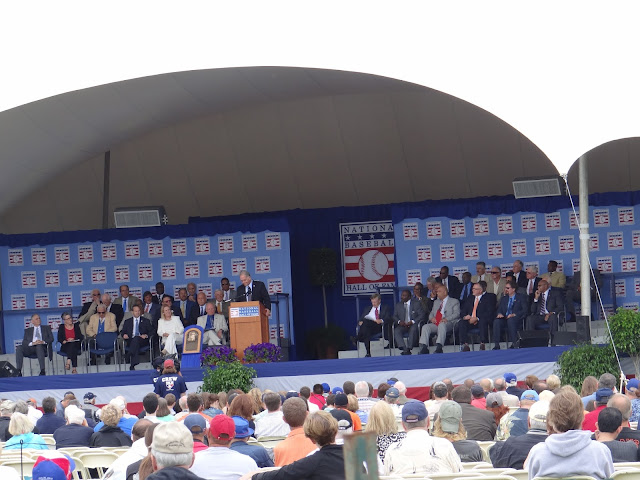 The ceremony itself lacked a little bit in terms of speeches, but I think that was the goal of the Hall of Fame in this controversial year. However, they finally got some spare time to pay tribute to the players inducted into the Hall between 1939 and 1945, who never received a formal induction due to the US involvement in World War II. Twelve players were inducted in that timespan, therefore 12 current members of the Hall read off each of their individual plaques. The biggest names of the 12 were legendary second baseman Rogers Hornsby along with "The Iron Horse", Lou Gehrig. Who better to have read their plaques than perhaps the greatest living second baseman, Joe Morgan; to read Hornsby's plaque, and "The Iron Man", Cal Ripken Jr.; to read Gehrig's? Here is Cal reading off of Gehrig's plaque, courtesy of my video camera!


While the day was muggy, the ceremony proved to be one of the bigger statements the Hall has ever made. There were many references to "playing the game the right way", which all seemed to be jabs at the Biogenesis/PED/Steroid era. I'm hoping that next year the Hall will add many players, including the ballot's first timers Greg Maddux, Tom Glavine, Frank Thomas, and managers Bobby Cox, Joe Torre, and Tony LaRussa. I'm not sure if I'll be there again, but I'll be watching it on TV without a doubt.