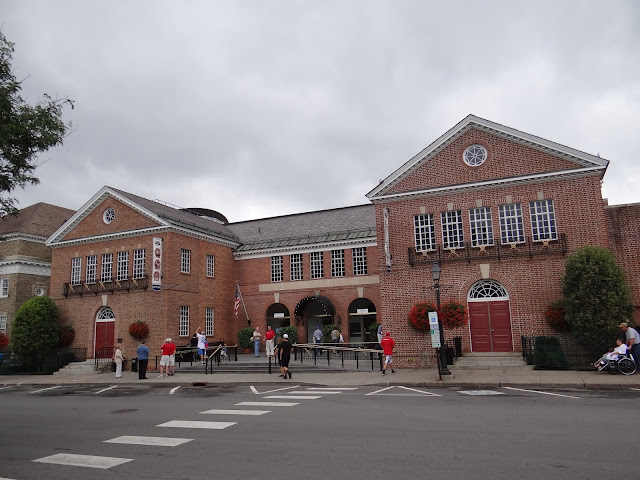 Hey guys, Drew back here! William has soared past me with this trip recap, however I've still got quite a bit to post. I'm not used to being as busy as I am but I'm trying to contribute to the blogosphere whenever I get around to it. With that said, here is my recap of our most recent visit to the Hall of Fame. 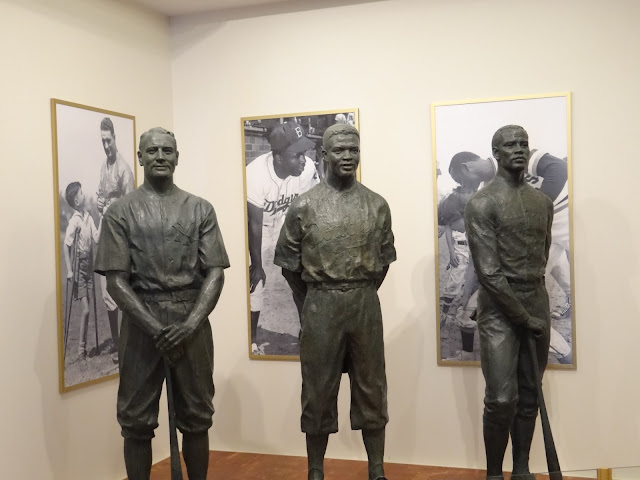 We originally went into the Hall before we went to the Induction Ceremony to get our tickets and hands stamped. We figured that after the Induction, many people would be checking out the museum, so rather than wait in line, we got stamped and returned later on, walking through the line like VIP members! 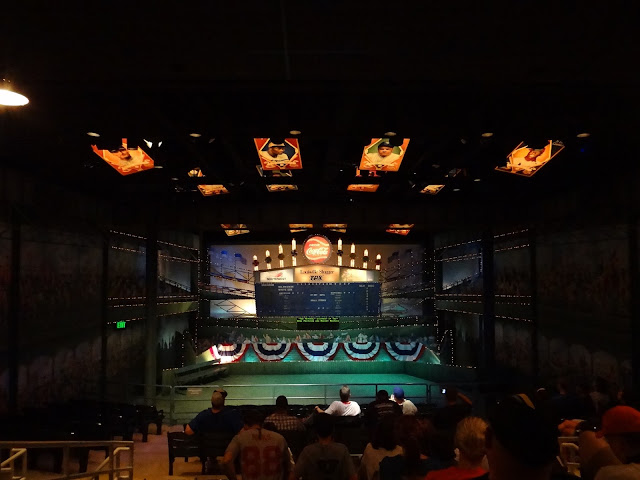 For any of you new to the Hall, normally the first thing you'll see in the Hall is their short little introduction video. If you aren't in the museum mood, this will change that. It's a nice beginning to the Hall, but I won't spoil it any more for any of you interested in checking it out for yourself. 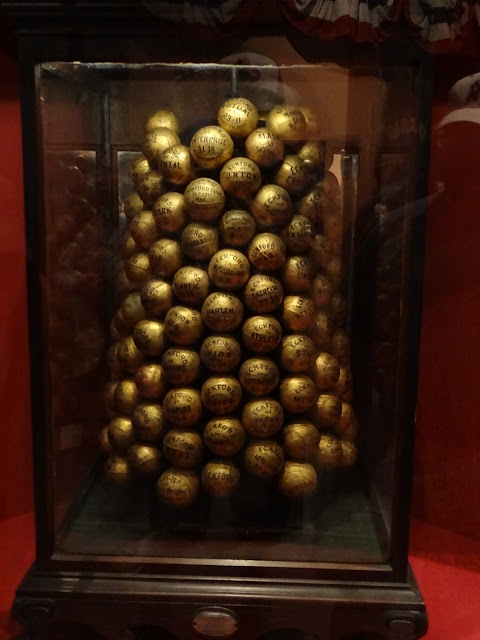 After the intro, you're told to start from the very beginning of history in the Hall, but I don't quite understand why you wouldn't. The earliest stuff is in my opinion the most interesting in all of the museum, especially since I had already been there in the past. There are a lot of unique pieces in the earlier displays, while some of the later displays contain more jerseys/hats/equipment/etc. 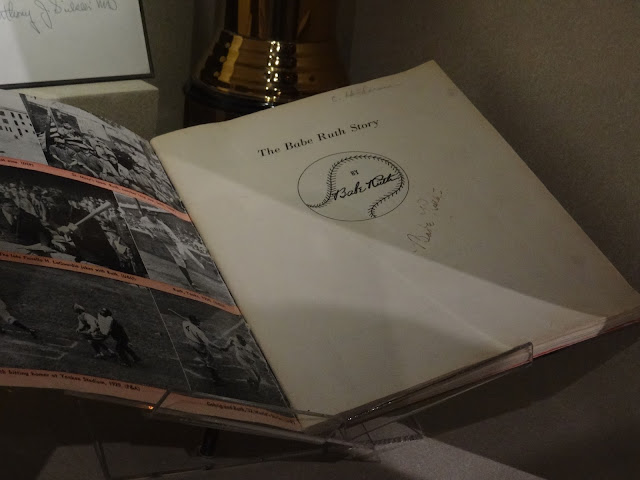 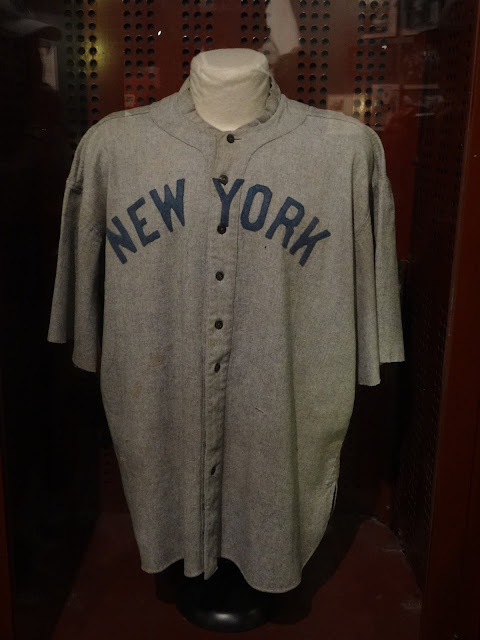 Babe Ruth's exhibit is one of the coolest in all of the Museum! The Hall owns many of The Babe's classic memorabilia, and it is almost overwhelming to see it all in the same place and take it all for what it is. However, they own his last ever autograph (above) along with some jerseys and bats from memorable moments. 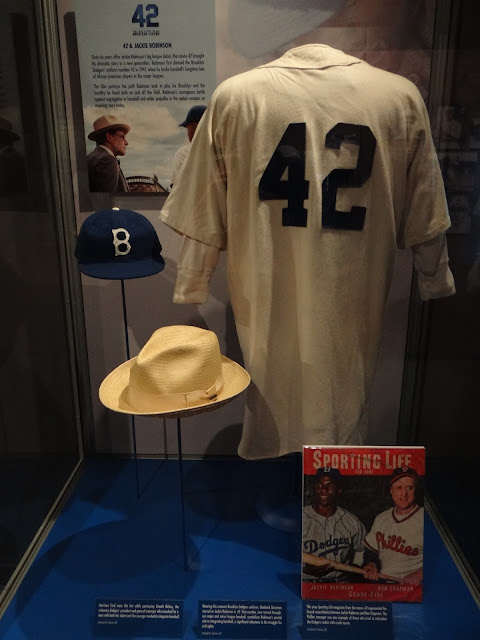 When I visited the Hall... I had still not seen 42. They had a small display featuring some of the movie memorabilia, and I wish I could've enjoyed it more. However, the night we returned to my house we got to watch it, and as far as I'm concerned we all really enjoyed it. 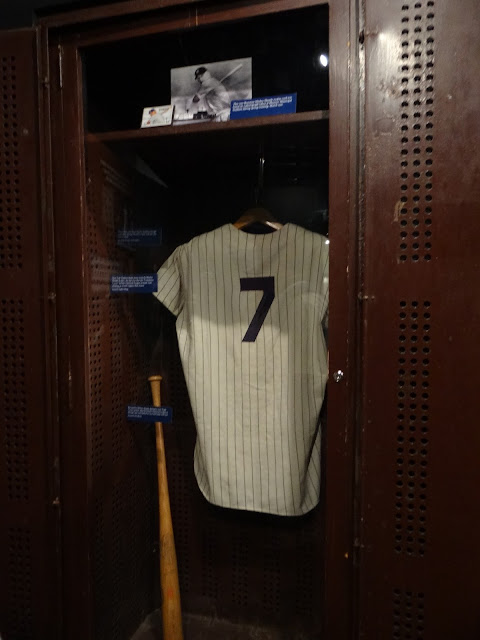 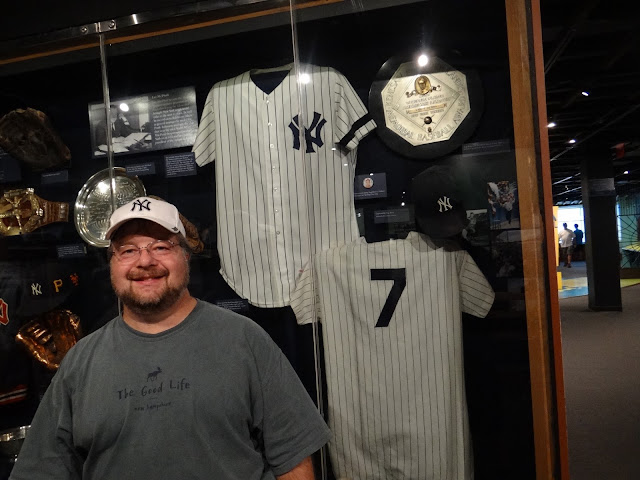 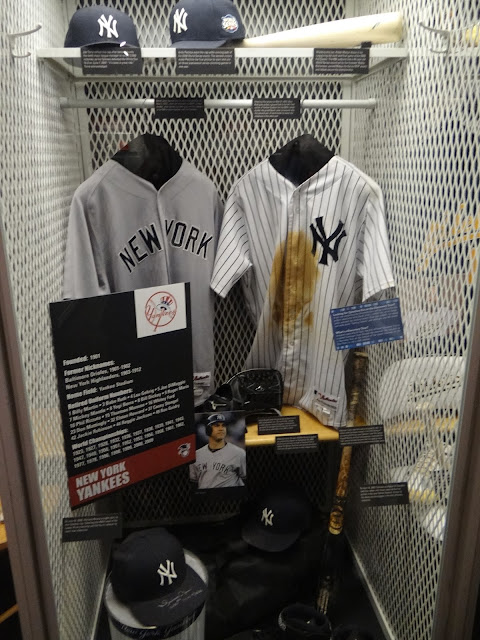 Hate the Yankees all you want, but when you go to the Hall of Fame you need to expect to see some of their classic memorabilia. Being a Yankees fan, there was an awful lot of incredible memorabilia I got a chance to feast my eyes on. 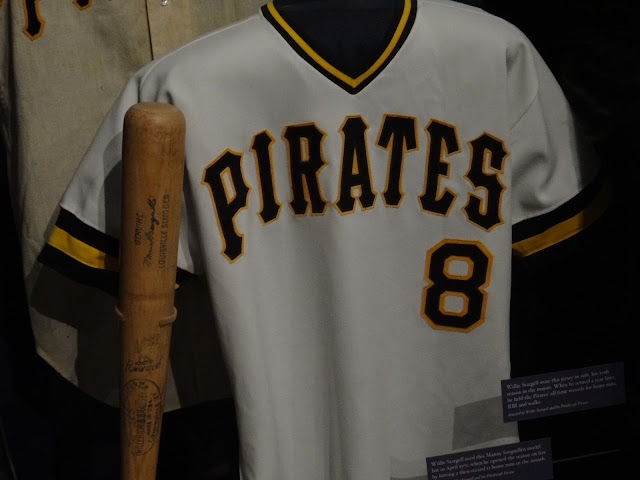 The Pirates have been a lot of fun to watch in 2013, and I've gained more appreciation for the organization by the day (well, everyone but Bill Mazeroski). I hope to see them win the NL Central and compete throughout the playoffs. Having them as a second favorite team should add some excitement in October when the Yankees most likely won't (and probably shouldn't) be playing. 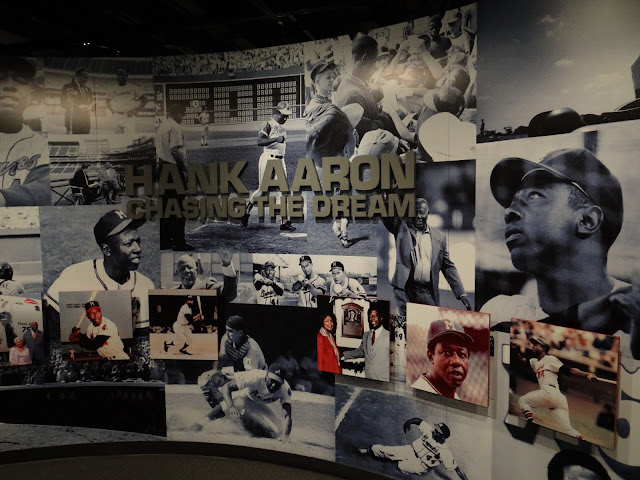 The first time I went to the Hall with my Dad in 2009, this Hank Aaron "Chasing the Dream" exhibit had been in construction. I remember they were working on the displays while we walked by, and we got to see one of Hank's game used bats outside of the glass. They did a really nice job paying tribute to Hammerin' Hank, and I found it interesting that the MLB records displays were right next to it... 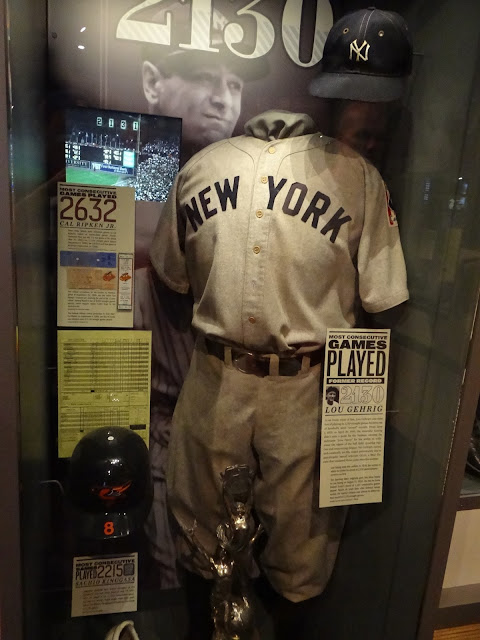 William and I's teams don't seem to share much in common. Both the Orioles and Yankees have been around for a while, and both have their share of incredible players, but otherwise they don't have a lot to relate to. Well.. except for the "Iron" connection between Gehrig and Ripken, the "Most Consecutive Games Played" record, which Ripken now owns obviously. The Hall did a nice job showing off some cool pieces surrounding the hallowed record. 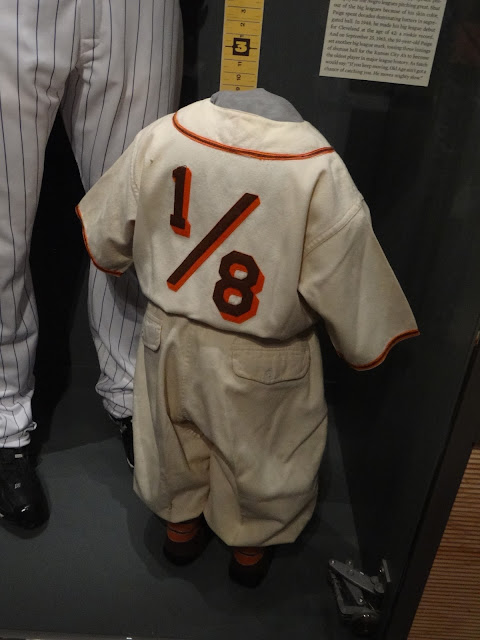 Even Eddie Gaedel's classic "1/8" jersey was on display! Gaedel, the legendary midget who had one at bat for Bill Veeck's St. Louis Browns in 1951, owns the highest On Base Percentage in MLB history (although he only registered one at bat)! His uniform was next to current MLB'er Jon Rauch's jersey, the tallest player to ever take the field in the Majors. 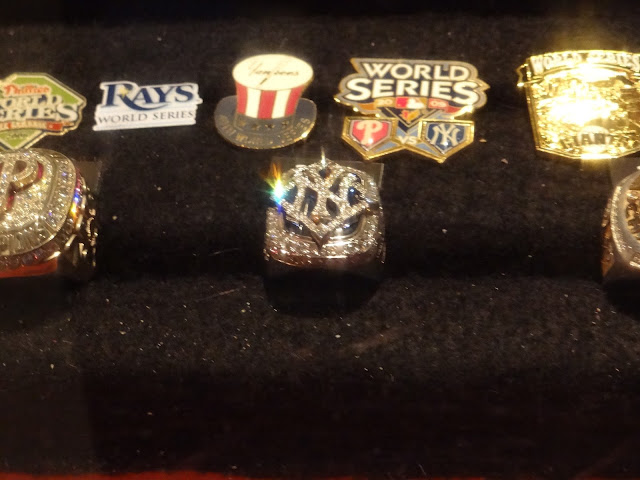 When I went in Spring 2009, this sucker wasn't in the World Series ring display, because it hadn't been won yet. The 2009 World Series has been the only Yankee World Series I've associated myself with throughout my life because I was far too young to understand their late 90's run. So, it was really neat to get to see one of the rings up close! 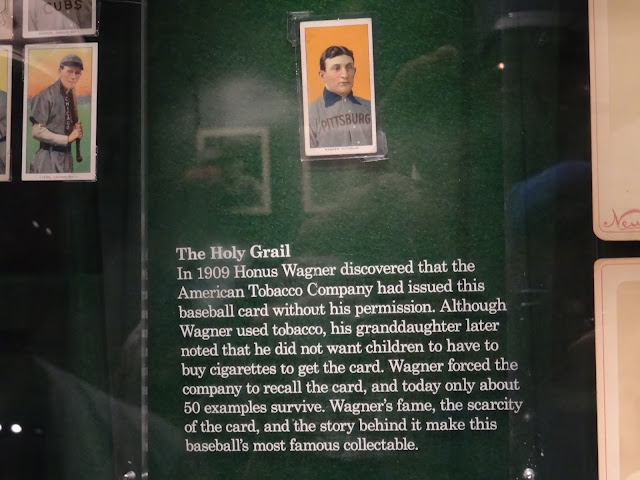 "Sipping from your cup til' it runneth over, holy grail". Justin Timberlake couldn't pay tribute to the 1909 T-206 Wagner any better. Whenever you're in a room with that card, you could almost taste the aura surrounding it. Simply put, it's the greatest baseball card ever created, and is a lot of the reason why we all still are able to collect today. 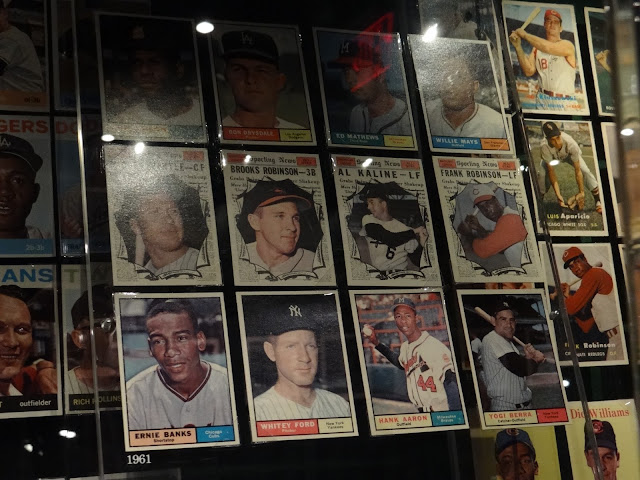 Also since our first trip, I began to start the 1961 Topps set! I'm now a little over halfway done with the set (including the high numbers), but I've really started to question whether I should bother with the high numbers or not. Of the 12 cards on display, I own 7, which isn't too bad considering I haven't focused on the set in a while. 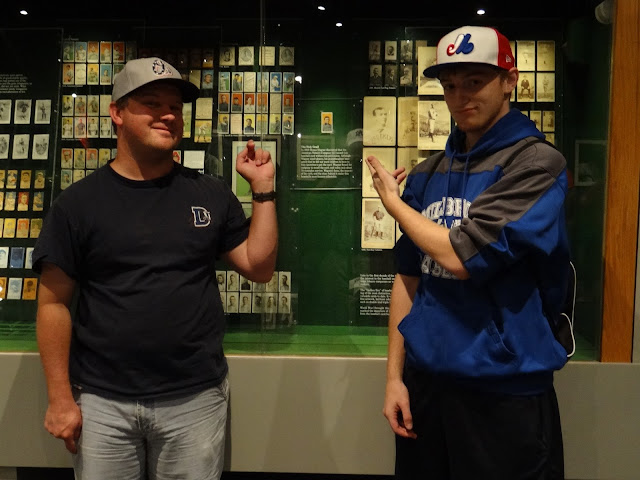 William and I really enjoyed getting to see the Hall together this year. It was a great experience, and I'm glad I was able to see it with someone who appreciates it even more than I do. However, I have a little bit more from the Hall I'd like to share with you all, which I'm planning on getting to tomorrow.