Hey guys, Drew back here. A few days ago I decided to waste my entire monthly allowance in two blows, and picked up two autos I wanted really badly for my collection. Check them out: 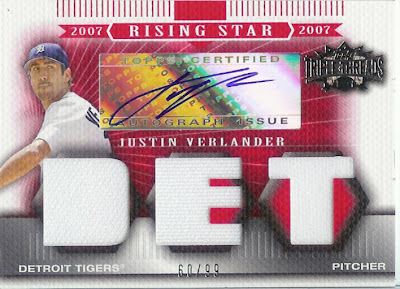 First off is a triple relic autograph from 2007 Topps Triple Threads of Justin Verlander, the ace of the Detroit Tigers. Verlander is posting a career year numbers wise, currently about to win his 11th game of the year against the Mets, sporting a 2.32 ERA as of before today's start! I'm so happy I picked him for my fantasy team, as my ace Tim Lincecum hit a few bumpy spots in his last couple of starts, so I had support behind him with Verlander. He also has thrown 2 no hitters in his career, one in 2007 and the other in 2011. He's becoming one of my favorite pitchers, and I got to see him face off against CC Sabathia last year: 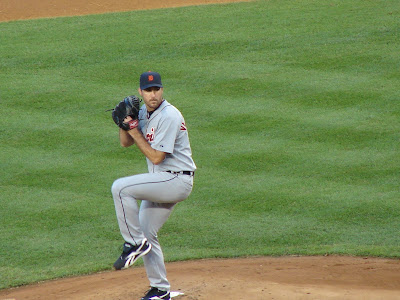 CC ended up doing better than Verlander, but it was a good game regardless. 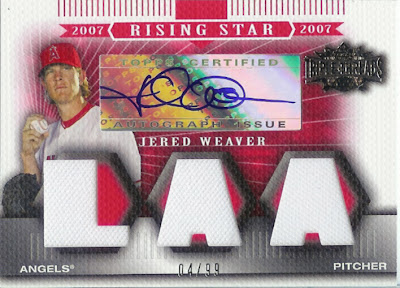 The next card was of Angels ace Jered Weaver, who is also in line to possibly take the American League Cy Young award, posting a 9-4 record with a 1.97 ERA. He took the league by storm in the beginning of the season, starting off with a 6-0 record, only allowing 5 runs throughout all of April. He also led the league in strikeouts last season. Weaver is a very underrated pitcher, and one of my favorites as well.
Both of these cards have a very nice design, and were fairly affordable. Both are numbered to 99 and have 3 white swatches. What do you guys think of them?
See Ya!
Posted by Drew at 4:24 PM