Hey guys, Drew back here, and yeah I'm really behind. I've got plenty to post about, just the time and motivation I have for doing so has been pretty pathetic. Finals start next week and I'm hoping and praying that I'll be ready for them, so I know for sure that I'll probably have to take most of the next 2 weeks off of here to focus more on whats gonna really get me somewhere in the future.

While I've got some spare time on my hands, check out one of my most recent successes, that of a former Yankee killing legend: 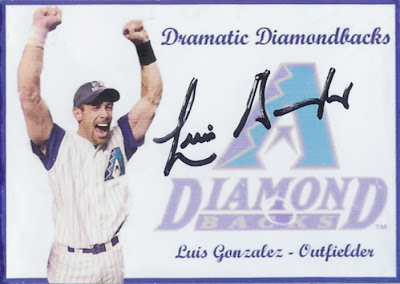 None other than Arizona Diamondbacks star Luis Gonzalez signed a custom card for me! The card took about 14 days to come back signed, and it sure looks great! Gonzalez was a great player, best known for his dramatic World Series walkoff hit against the greatest closer of all time, Mariano Rivera, but he also had a very good career. Not Hall of Fame worthy in my opinion, but great enough to make a lasting impact on the game. He retired following the 2008 season with a lifetime batting average of .283, with 2,591 hits, 354 home runs, and 5 All Star selections! He quietly put up great numbers throughout the steroid era, but exploded in 2001, hitting 58 homers, leading his team to the top!

Overall I'm really happy to add his autograph to my collection!