Revealing the Mysterious Binder... A Little at a Time... Is This a Dream?

Hey everyone, Drew back here! I've been waiting a long time to post this, because I had originally planned for this to be the last post of the series. However, things got in the way, and I haven't had much of a chance to add to the series, and it's been months since I first got the binder. Since then, dad has picked up more tubs off of them and I haven't even gotten into the hidden treasures in them! So, without further ado... just enjoy, perhaps the greatest part of my entire collection! 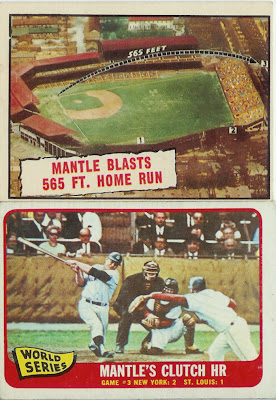 Yes, this post, is dedicated to the one and only baseball icon, one of my all time favorite players, Mickey Mantle! The moment I opened up the mysterious binder, peeking beneath the first page, was a card of his, one that you'll see in a moment. First off however, are the least valuable of this group.
The top card, from the 1961 Topps set, a set I've taken on the challenge of attempting to complete, reflects when Mantle hit a 565 foot home run, known as the "Tape Measure Shot"! An arrow points from home plate to beyond the outfield bleachers, outside of Griffith Stadium! The bottom card, from 1965 Topps, has to do with his clutch home run to win Game 3 of the 1964 World Series against the Cardinals. Both cards don't have the aura to them, like his regular cards, but they capture some of the greatest moments in one of the greatest baseball player's career! 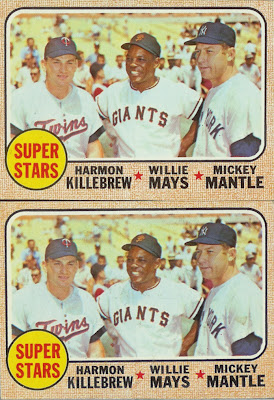 The next two cards are the same, but its certainly not a bad card to get 2 of! From 1968 Topps, this is a "Super Stars" card with Mantle, joining legends Willie Mays, and recently deceased Harmon Killebrew! This is truly an unreal card, between these three players are 7,784 lifetime hits, and 1,769 home runs! I absolutely love the card, but with finding two of them, I was wondering if any of you would be interested in making me an offer for one of the two cards. What I ask for in exchange is a Mickey Mantle card that you own, that is NOT also in this post. I don't know if I'll get any offers, but I would love to make more of a variety in my small Mantle collection. 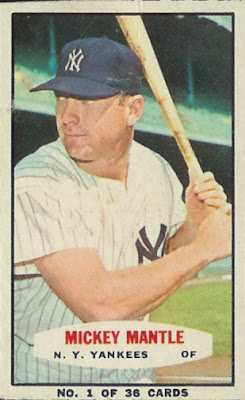 Next, from 1963 Bazooka, a very mini sized card of Mantle. This is a neat little card, which I've never seen before, but I like it. It may not also carry the value of these next three, but any Mantle card is a Mantle card! 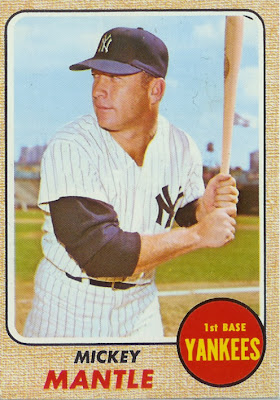 This was the first Mantle card I caught my eyes on, and it is by far my favorite of any of these cards. The 1968 Topps Mantle card may be his second to final issued Topps card, but it may just be one of his finest. Mantle, portrayed in his lefty stance, shows his injuries finally wearing him down. Also, just to point it out, other than a slight centering issue, the card is in very nice shape! 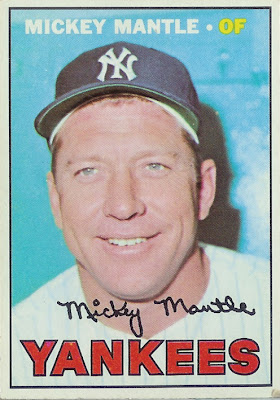 Turning back the clock a year brings us my next Mantle card, this being his 1967 Topps card. It seemed as if Topps tried their hardest to make Mantle's card the greatest looking year in and year out, and they seemed to succeed. This isn't Mantle's coolest card by any means, but it's very valuable and nice all around! 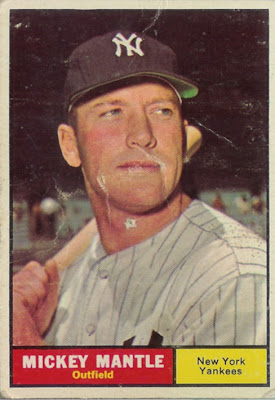 The last, but not least (hopefully) card of Mantle was this one, from 1961 Topps! This was the main reason I decided that I could attempt this set, because I was able to knock off perhaps the most valuable card in the set for free. It's not in good shape surfacing wise, but it looks better in person than it does on the scan. Sometimes wear can be a nice thing for vintage cards, just to assure you it's not a reprint, and it can have interesting stories behind them, of the times where people bought baseball cards for the sake of having baseball cards, and not to have eBay in their back pocket, ready to let loose of their valuable items.
I wanted to finish this post by saying that it's hard for me to make this out to seem like a regular, nonchalant kind of deal. These are cards that I never thought I could even DREAM of owning, and now, not only do I have one, not 2, 3, 4, 5, 6, 7, but 8 cards of Mickey Mantle from his playing days is absolutely unbelievable! I'm not one of those collectors that spends money, looks at the card once, and never again. I look at, cherish, and hold memories with a lot of the cards I own, and these will certainly be some of them.
This won't be the final binder post yet, as I want to highlight the rookies and other stars I found in there. But nothing can top "The Mick", especially in baseball card lure.
See Ya!
Posted by Drew at 2:43 PM