Hey everyone, Drew back here! Recently, to go along with my other purchases, I picked up another future All Star's autograph on eBay! Check it out: 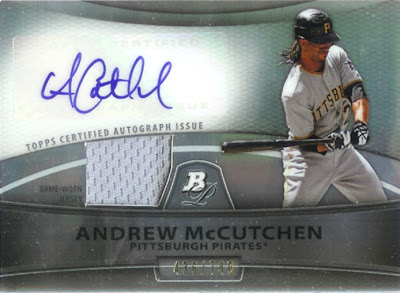 From 2010 Bowman Platinum, an Andrew McCutchen autographed jersey card! It's the refractor version, even though it doesn't look anything like a refractor, and it's serial numbered out of 740. Although he's only been in the league since 2009, he looks like he could be one of the top 3 or 4 center fielders in the game several years from now, if he's not already. He contains all 5 necessary tools, and is one of the only hitters in the Pittsburgh lineup that can provide any life at all throughout every game.

This season, McCutchen has batted .284 with 10 home runs, 37 RBI, and 11 steals. I haven't gotten too much of an opportunity to see him play but he looks to be one of the most colorful and exciting young players in the sport. I'm definitely going to follow him for a while, and I hope he turns out to be worth the $10 investment!

As for his autograph, while its not pretty by any means, it sure isn't the worst I've ever seen! This card will now sit next to the extremely similar Jose Bautista autographed relic I own from this set, so it's in very good company.

What do you guys think of McCutchen?