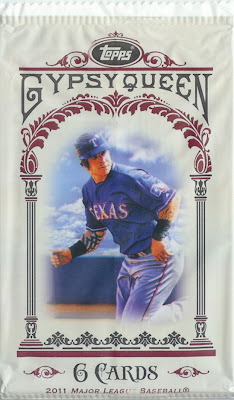 Hey everyone, Drew back here. So, last weekend, I took a trip to the mall, to go see Pirates of the Caribbean: On Stranger Tides. I must say that it was a really good movie, and if you haven't gone to see it yet, you really should make some time for it! Also, in my mall we have a Target, one of the greatest homes of retail wax. I've bought an awful lot there in the past, but try not to anymore. But, from what I've seen, retail 2011 Topps Gypsy Queen has been a major "hit"... literally. Hobby boxes are finding missing autos, and I wonder if the retail cards had anything to do with that! With that in mind, I purchased 4 single packs and a rack "value" pack with 3 packs and a bonus pack of green parallels. Let's see how I did: 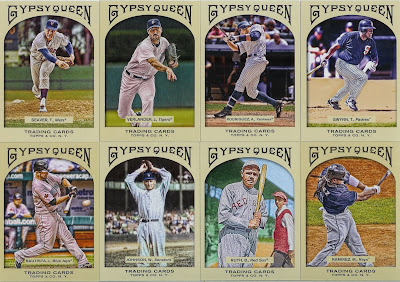 This has been my first taste of this product of yet, and I easily chose it over 2011 Bowman, in my mind the most boring product of the year, year in and year out. That product is only fun when you pull anything of Bryce Harper. Other than that, I would choose literally anything to get away from Bowman.
The base cards in this product are very sweet, and have never been done before, so its pretty fresh. The pictures has used a sort of photoshop trick to them, which makes them almost look like a painting. Out of the base cards I pulled, I really liked the A-Rod card as well as the Babe Ruth card, even though he's pictured as a Red Sox. 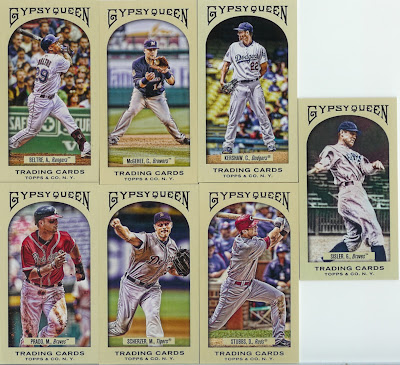 Something that has been used almost too much is the mini concept. In every pack, you get one mini card, and I got my share. The Drew Stubbs and George Sisler minis are the red back versions (pointless gimmick), and the rest are base minis. 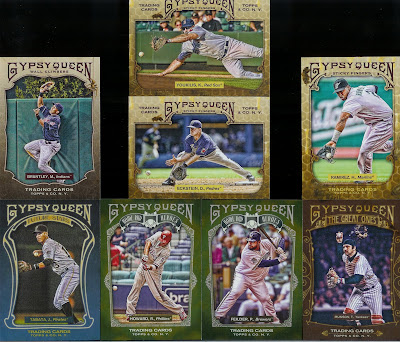 I pulled a lot of insert cards as well. The inserts are fairly different, as they divide a lot of guys in the product into different groups, such as: Wall Climbers, Sticky Fingers (what kind of name is that?), The Great Ones, Future Stars, and Home Run Heroes. I pulled at least one of each, and by far my favorite insert was the Thurman Munson "The Great Ones" card. Sure, the photo has been used a lot for his cards, but it still looks great!

The bonus 3 green paper parallel card pack didn't really disappoint, as I ended up pulling Ubaldo Jimenez, Andre Dawson, and Kevin Youkilis. I love the Dawson card, can care less about Ubaldo, and can't stand "Youk", so please note that if you're curious in trading for these. They aren't numbered but they look great! 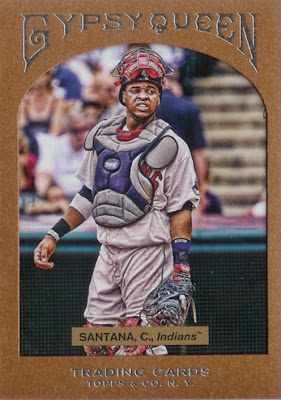 In the packs I also pulled this Carlos Santana copper paper parallel numbered to 999, which was a pretty cool pull. It's for trade if anyone wants it. 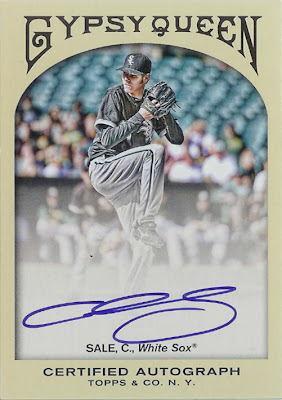 Finally, I did indeed pull an auto, that of Chris Sale, reliever for the White Sox. Could've been a lot better, but then again, I could've not pulled an auto at all. My goal was to pull an auto and that's exactly what this is. He is 4-1 this season with a 3.40 ERA and 6 saves as the "next in line" closer for the Sox. He's been highly touted as a prospect, so I'll wait and see how the hype goes. But if anyone is interested, please shoot me an email to yanks1996wsc@gmail.com and offer me an auto in exchange.
That goes for all the non Yankees cards I pulled as well. If anyone is interest, send me an email. Other than that, everybody have a good Saturday!
See Ya!
Posted by Drew at 9:29 AM