Hey guys, Drew back here. I got 3 packages in recently, and I guess you can consider them all trades although I haven't been all that active in the trade world due to schoolwork lately. Might as well get to it now, the first trade was with Max of Knuckle Ball Blues. Max has been caught up with a lot of schoolwork lately as well, but me and him were able to work out a nice little trade. I sent him one of my 3 Billingsley TTM autos and got these in return:

3 2010 Topps Pro Debut cards. This set kinda bores me a little, although I do like the Yankees and Renegades. The cards are nice though, being the 1st taste of the product so far for me. We got Austin Romine, Adam Warren, and a blue border Jesus Montero numbered out of 369. Very nice stuff though! 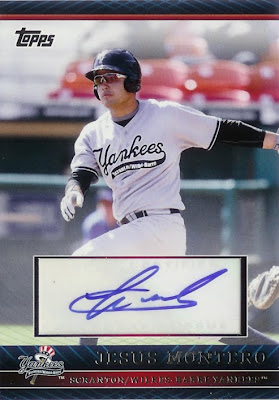 Yes that would be a Topps Pro Debut Jesus Montero sticker autograph! Jesus is one of the Yankees top prospects and I have 2 of his autograph cards now! I think he has the potential to play for us next year, maybe as a backup, but then take over as the starting catcher in the future! I'm definitely psyched to get this card, thanks Max!

Next I made a trade with Rhubard Runner of “é rayhahn, rayhahn". Him and I have tried to work out trades in the past but they haven't worked out right, until now. Check out my part of the trade: 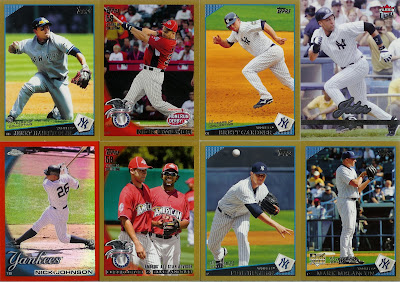 First, a bunch of Yankees inserts, including 4 2009 Topps gold cards (Phil Hughes, Mark Melancon, Jerry Hairston Jr., and Brett Gardner), and 2 2010 Topps gold cards (Jeter/Andrus, Swisher Home Run Derby!), including a Swisher for the PC! Also got an orange refractor of Nick Johnson from Topps Chrome, which is a very nice card despite the player. 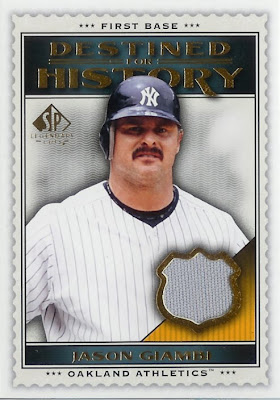 The meat of this trade were these 2 relics. First, a Jason Giambi jersey from 2009 SP Legendary Cuts. Giambi is pictured as a Yankee on this card but it says Athletics everywhere, a collectors pet peeve. I don't like that personally, but the card is nice and I sure miss the stache! 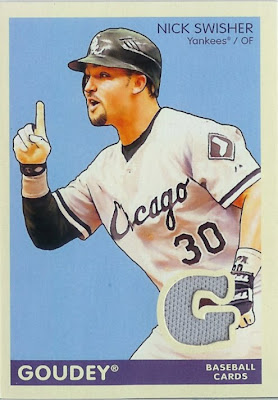 The second relic is of my homeboy, Nick Swisher! This card is from 2009 Upper Deck Goudey, which in my opinion was a boring ripoff of the 2007 set. But this card is fairly nice, it says Yankees as the team but he is pictured as a White Sox player, unfortunately, considering he played his worst year in the MLB with them.

Thanks so much Rhubard Runner! On to the last one, which was a very small trade that I almost forgot about (sorry!), which turned into a much larger and nicer trade! Jeremy of "no one's going to read this blog" sent me a bunch of sweet stuff with a special surprise! 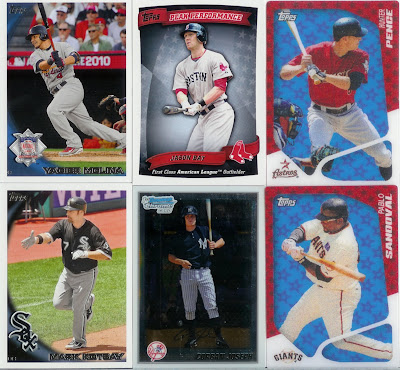 First, some 2010 Topps set needs, and a 2010 Bowman Chrome card of Yankees prospect Corban Joseph, who I haven't heard of before. Not much super special to write home about here, but a definite thanks for helping with the set! 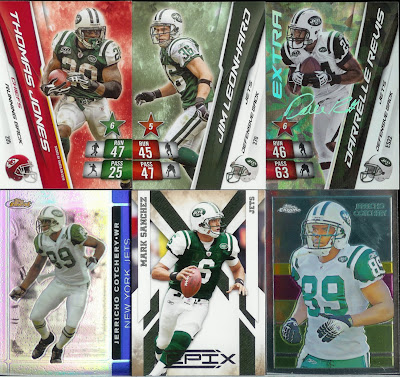 That wasn't all however! He also included a bunch of Jets including a few Panini Adrenalyn cards, which actually are pretty cool looking! Also included was a nice chrome Cotchery card from 2009 Topps Chrome, a sweet Sanchez from 2010 Epix, and a Cotchery blue refractor from 2007 Topps Finest numbered out of 299! This card is sweet!

Jeremy has a certain talent, and he likes to share it with other collectors! He is a great artist, and he made me this sketch card himself of Robinson Cano! 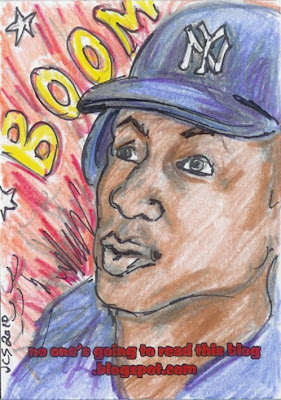 I can't describe how awesome this is! I'm glad to add this 1/1 sketch card to my collection! Thanks SO much Jeremy!

Thanks again to everyone mentioned in this post! See Ya!
Posted by Drew at 3:06 PM