Hey everyone, Drew back here. School starts in a few days for me, but before the great summer ended, my friend Matt and I headed to Dutchess Stadium for a Renegades game. The Hudson Valley Renegades are of course, my local team, as I've talked about them a lot lately. I went to a bunch of games this summer and participated in a bunch of on field activities over this summer, and it's always fun to head back. It was cool, because we got to sit in the picnic area, for the price of the tickets, they gave you all you can eat burgers, dogs, chicken, and all sorts of other stuff. Matt's brother Ethan caught a ball and got a ton of guys to sign it, yet the thing that made my day was the team set was the giveaway for the day! It was actually a doubleheader, starting off at the 3rd inning of the first game, and then a second game after. 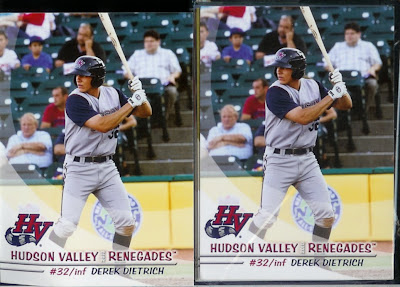 Derek Dietrich isn't having a huge year, but he could still make a big impact. He played for Team USA with Strasburg, was the Georgia Tech starting shortstop, and was a 2nd round pick this year by Tampa Bay. I walked away with 3 base cards of him, and 1 entire team set (still unopened). The only card worth really hanging on to is Dietrich, the second best card is of manager Jared Sandberg, who played a few years in the majors in the late 90's, and is the nephew of Hall of Famer Ryne Sandberg. But you never know, my last set turned out having Jeremy Hellickson, Josh Hamilton, and Evan Longoria! 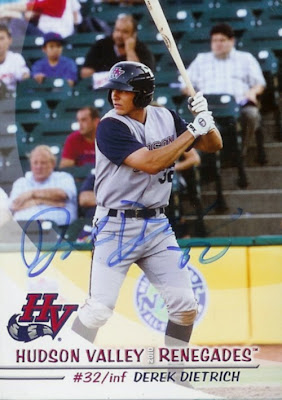 I made sure I'd get him, and, we got him! My one goal is not to attack everyone else and get autographs of half the team, but this time, I needed to just get this guy. He's gonna be good I think, so we made sure we'd leave with a few autographs. During the 1st game, Dietrich sat out so he sat over by the bullpen, and we tried asking then, but apparently these single A guys with nothing better to do are forced to watch their horrible team play and can't sign. Well, one chance wasted. Then, after the first game ended, he walked by us and we yelled "DEREK!! Can you sign these cards please?" He said for us to wait up, and we waited up until he got out of the clubhouse. Unfortunately right before the team came back out, a local varsity football team came on the field and did some stupid thing, right in front of us! They play our school, so we talked a little smack and thought we'd get stabbed or shot in the parking lot, but it was worth it, they were idiots.

Derek came back and started stretching and when he started walking over we yelled "DEREK!!!" and he started coming over and signed our cards. I told him "Thanks so much, see ya in the bigs", and Matt said "Thanks, see ya on SportsCenter!" It was pretty awesome I gotta say, and definitely made the trip a good one. 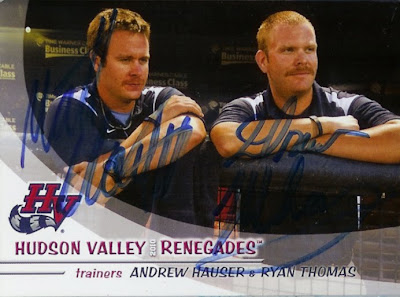 And of course, we got bored watching them lose so we signed a bunch of cards. I think this dual autograph trainer card came out pretty sweet, but that's just me. Don't worry fellow card collectors, I have a whole unopened set so this is just leftovers hahaha.

Overall I had a great time, the Gades lost Game 1 and only had 1 hit while we were there for the remaining 7 innings. They won Game 2 3-0 but we left when it was 0-0 in the 5th. Dietrich didn't do anything but he hasn't done much this year, let's just hope he turns out ok, he's batting in the .270's with 3 home runs right now, so I wouldn't consider him a star, but it would be sweet if he followed in the footsteps of Hamilton, Longoria, Price, Hellickson, Podsednik, and all the other former Renegades. Thanks again to Matt and his family, if you're reading, and See Ya!
Posted by Drew at 9:27 AM