Hey guys, Drew back here. I'm not permanently back, but I will be soon. I got a TTM, bought something on eBay, went to the shop today, got some mail, but before I post all that, this is by far the greatest "Vintage Cards From Pop Popps" (not cards though) gift of all time, and he will never be able to beat this. There has been nothing I've ever dreamed of that I'd want more than something like this. Take a look! 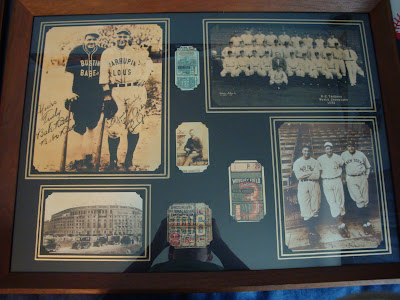 So Pop Popps stopped by today, and I didn't know that he had these 2 frames waiting for me. He got them from a dealer, for less than $500, which does seem very suspicious to me, but they do look real. Shown on this first frame is an original picture of the old Yankee Stadium, an original picture of Gehrig, Ruth, and Foxx, some sort of old cigarrette card of a former Yankees manager (don't think it's real), tickets to World Series games, including the legendary "Called Shot" ticket, and an autographed picture of the Babe and Lou Gehrig! OMG!!!!!!! This was completely unexpected! Take a look at some closer up shots. 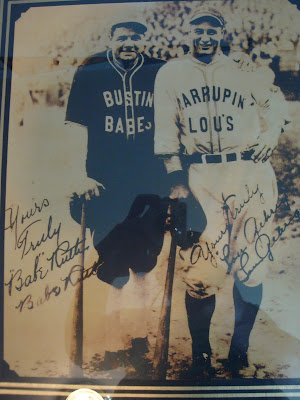 The top part of the Autograph for both Ruth and Gehrig is a copy, but to make the item "more original" from what a story says on the back of the frame, they signed each below the copy. Now is this real, because it was one heck of a steal if so. What do you think? 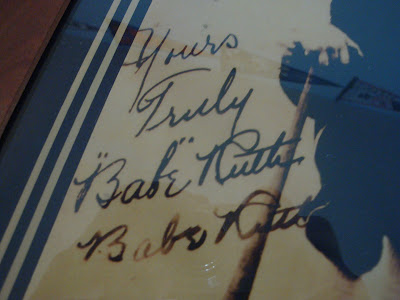 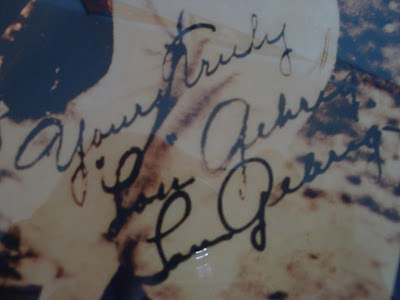 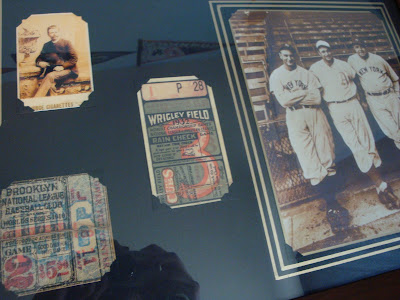 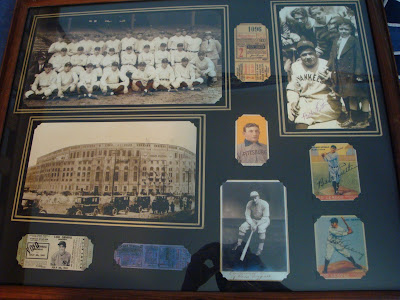 On to Frame #2, where we have another Yankee Stadium original photo, more World Series tickets, and a ticket to Lou Gehrig Day! Wow. Then we have what looks like a reprint of the 1909 T-206 Honus Wagner, because it's much bigger than the one I saw in person. That picture on top is indeed the 1927 Yankees, an unbelievable photo. Then the big four. There's a Honus Wagner autograph on the bottom row, 2nd to the end, which may or may not be real. It says "Compliment of J. Hans Wagner"!!! Then in the top right corner, another autographed Babe Ruth photo of him with a group of kids! Lastly, 2 signed cards of the Babe and Lou Gehrig! Again, don't think the cards are authentic, but the autographs sure look like it! I can't believe how amazing this is! 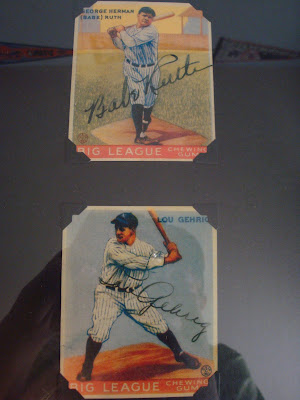 No the cards are not cut, they have a little border around them, as well as all the other items. These look the most authentic out of them all by far, these signatures are really nice! 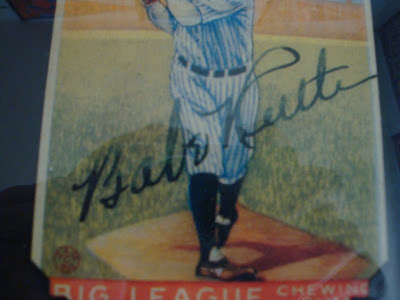 Come to think of it, this could be the actual 1933 Goudey Babe Ruth card! If the autograph is real, the card is real. There is no way there were reprints back in those times, so this is incredible to own! 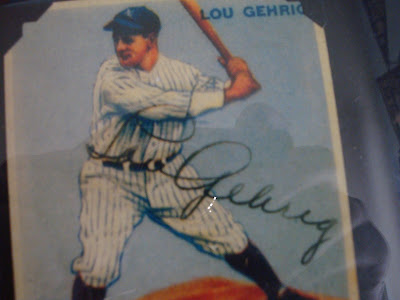 So if this is real I own Lou Gehrig's autograph AND rookie card! Unbelievable! 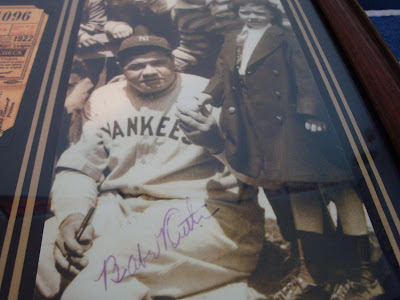 Lastly, a close up of another Babe Ruth autograph! He signed in what looks like purple, so that's neat. It looks real again, but even I know how to sign like Babe Ruth! 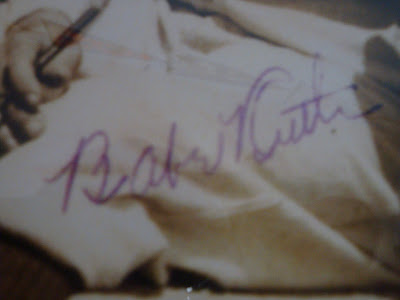 This hobby is really a pain. I sure love it, but some people are in this just to ruin other collector's collections. This could be anyone's autograph! I wish I didn't have to even suspect that but I have no choice but to, it's not authenticated so it's not authentic. I sure hope they're real! 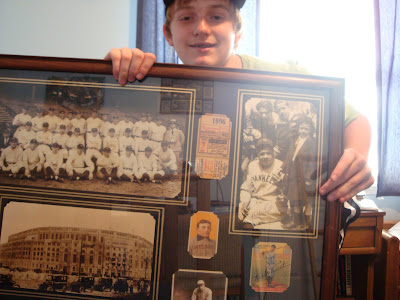 Here's proof that these pictures aren't from eBay. That's me with one of the frames! I'm so happy to have these pieces, and I can't believe I own them! From the beginning of my blogging days I had no idea how good my collection would turn out, and authentic or not, these are incredible pieces in my collection!

What do you think? Do the autos and tickets look real? The price is hard to believe, which is leading me on to thinking that there's no possible way that this is all real! But hey, you never know! Thanks so so so so so so much Pop Popps, this is absolutely incredible! See Ya!
Posted by Drew at 5:27 PM