Mail from someone obsessed with Baseball!

Hey guys, Drew back here with some more mail! Yay! I could be writing all of this stuff into one post, but I just don't have time, considering I spent the last 2 hours typing an essay! I got a package recently from Kelly, from Baseball Obsession-itis! She and I worked out a very nice deal, we got some hits exchanged, and some wantlist needs too! Check out my haul! 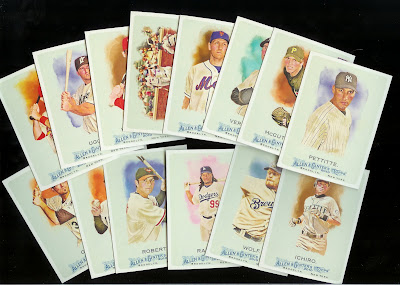 First, a bunch more 2010 Allen & Ginter cards! This makes me only need 1 more card to complete the base and short print set, card #75, who I believe is of Jayson Werth. If anyone has it let me know! By the way, this scan came out really cool hahaha. 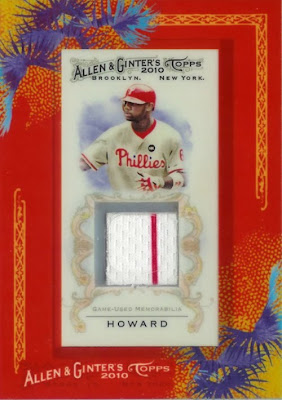 From one of the best designed relic/auto sets of all time, a 2010 Allen & Ginter Ryan Howard jersey card with a pinstripe! I haven't gotten anything major of Ryan Howard really except a dual relic from the card show that dad got me! As you've probably noticed, I've been working on branching my collection out and getting cards of players not playing for the Yankees that I like. This guy is certainly one of my favorites! And wow, this card looks spectacular! 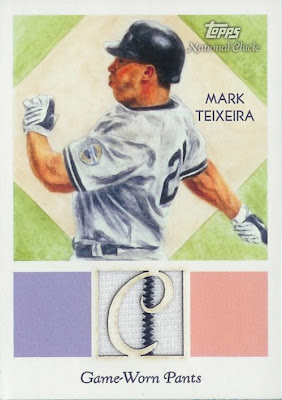 I never said I stopped collecting Yankees too though! Here's a very nice 2010 National Chicle jersey with pinstripe card of Mark Teixeira! This is now my 4th Yankees relic card from this set, 3 of them being pants cards! And the weird thing is, the only one that is numbered has game used "memorabilia" instead of pants. This is a really card, but again, my biggest complaint is that pink and purple should never be used on a baseball card set!

Thanks so much Kelly! Everyone please check out her blog!